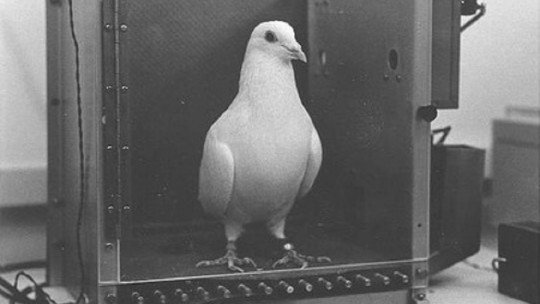 In learning psychology, numerous phenomena have been studied that have their theoretical basis in operant conditioning. Within this we find a concept called the law of equalization .

In this article we will see what the law of equalization consists of and how it was formulated.

The equalisation law was initially formulated by Richard J. Herrnstein (1961) because of an experiment with pigeons in concurrent variable interval programs (i.e. programs where the criterion for administering the booster is the variable time elapsed since the last booster was presented). We will see later and in more detail what this type of program consists of.

In this experiment, the pigeons had two buttons in a Skinner box. Each button gave rise to different rates of food reward. It was observed that pigeons tended to peck the button that produced the greatest food reward more frequently than the other button. In addition, they did so at a similar rate to the reward rate.

What is the equalization law?

The equalization law is a quantitative relationship established between relative reinforcement rates and relative response rates during the development of concurrent reinforcement programs. It merely establishes that there is a correlation between behaviour and the environment.

This is a law that has helped psychologists and behavioral analysts to relate behavior to the environment and to develop equations that clearly show how these two covariates would work.

It is applied with sufficient reliability when non-human subjects are exposed to concurrent programs of variable interval, and its applicability in other situations is less clear, depending on the hypotheses formulated and the details of the experimental situation.

The equalization law has been tested experimentally on different species , as well as on groups of subjects (not only individually).

This is a descriptive law of nature, and not a mechanistic law, as it does not explain the mechanisms responsible for the distribution of responses. Furthermore, it ignores when individual responses occur.

There are three types of theories that try to explain this law; they are the following.

They mainly explain sets of answers and are associated with the total distribution of answers and the reinforcers that are given in the contexts in which they have to be chosen.

They focus on what happens at the level of individual responses and consider equalisation as the net result of these individual choices .

They focus on behavioral characteristics that are neither molar nor molecular, but something in between.

The equalization law, as we have seen, arises from concurrent programs involving elective behavior. The simplest choice situation is based on two answers to be chosen, each of which is followed by a booster .

Concurrent programs occur at the same time (or concurrently), and the subject is free to switch from one answer key to the other.

One of its generalizations is that it refers to situations of forced choice (concurrent reason programs), where it is mandatory to choose one of the options. Thus, in forced choice programs, the way to comply with the equalization law is to respond to only one alternative. For the subject, the most appropriate strategy will be to choose the best alternative and keep it .

Deviations from the equalization law

The variables that determine the commented deviations would be the following:

Use of different response topographies for each alternative

These involve different types of effort; for example flapping (alternative A) and punching a key (alternative B).

The use of different reinforcers for each alternative

This makes it impossible to establish an equivalence easily.

The difficulty of switching from one alternative to another

For example, let’s think about subway transfers. Changing from one task to another implies some delay (difficulty or effort for the subject).