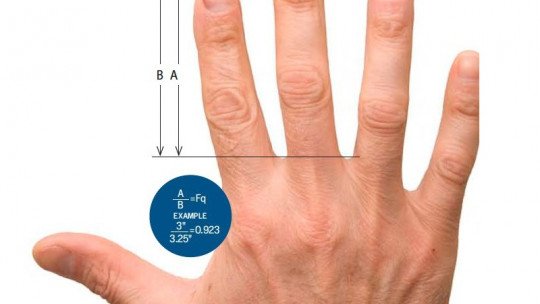 The results of research are often surprising and can sometimes seem very debatable. As rare as the findings of a study published in the journal Clinical Anatomy , , the length of the index and ring fingers , as well as the asymmetry of both hands, may predict schizophrenia in males.

Schizophrenia is a psychotic disorder that causes a severe distortion in thinking and perception of reality . People who suffer from this serious condition, experience hallucinations (visual or auditory), delusions, loss of contact with reality or a disorder of self-perception, among other symptoms. Generally, schizophrenics also suffer from loss of motivation, lack of energy, emotional disorders or social withdrawal.

In Spain, this disorder affects half a million individuals, and its onset usually occurs during adolescence (although also in childhood) or early adulthood. It seems that in men it starts at an earlier age than in women.

Although it is not clear what causes schizophrenia, there seems to be some consensus that it has to do with a combination of genetic and environmental factors.

As a study by the Center for Biomedical Research Network in Mental Health (CIBERSAM) shows, patients with schizophrenia have a life expectancy of 10 to 20 years less than people without this condition.

The study and the conclusions

The study, published by Clinical Anatomy , was conducted by researchers in Turkey who measured the length of 103 men with schizophrenia, then compared the data with the finger length of 100 healthy men.

For the study , the ratio of fingers (length of index finger divided by length of ring finger) was calculated and researchers found that men with schizophrenia had a longer index finger and a shorter ring finger . This only occurred in the right hand, as no significant differences were found in the left hand. This asymmetry between the hands of people with schizophrenia is known as the “index of asymmetry”.

According to the director of the research, Dr. Taner Oznur, “the asymmetry index has potential utility as a diagnostic test to determine the presence of schizophrenia.

Researchers conclude that testosterone may be the key.

Much past research has shown that exposure to abnormal testosterone levels in the womb (during the fetal stage) can have a negative impact on brain development, increasing the risk of schizophrenia and other mental disorders. In addition, the same exposure of testosterone in the womb can also affect the size and length of the fingers.

But does this indicate that finger length predicts schizophrenia? Not exactly, because although there is a correlation between finger length and schizophrenia, this does not mean that it is due to a causal relationship , it may be due to other variables or simply random. What does seem clear is that this research will provoke future research in this line to rule out or confirm these results.

On the other hand, this study has only been carried out with men, the results with women could be different.

Other results in the same line of research

This is not the first time researchers have associated the “finger ratio” with behavior. Previous studies have claimed a relationship between finger ratio and sexual orientation, infidelity, academic performance, physical aggression, or heart disease.