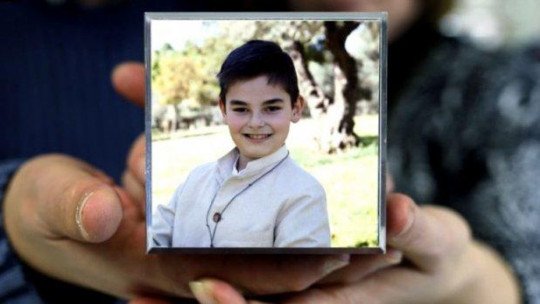 Bullying is a widespread phenomenon in Spanish educational centres , although many teachers and parents do not know of the suffering of the victim until it is too late.

The fact is that verbal attacks and psychological and even physical aggressions that are prolonged in time and that seriously harm the person who suffers them, are not always openly manifested by the latter, turning this suffering into something internal.

Recommended article: “The 5 Types of Bullying”

Diego González, a bullying victim who decided to commit suicide

The discomfort lives with the person from the moment he gets up until he goes to bed and sometimes provokes such fatal decisions as that of little Diego, a boy of only 11 years old who could no longer stand this ordeal and decided to take his own life . Leaving his parents and those who knew him marked forever.

In his farewell letter, Diego Gonzalez tried to make his parents understand his situation, and asked them to “someday hate him a little less” for what he did, because “he couldn’t stand going to school and this was the only way not to go. Bullying is devastating for some people, and little Diego is one example.

I couldn’t stand the suffering anymore

Diego’s case shocked Spanish society . The events occurred on October 14, 2015, when the little boy, tired of suffering from bullying, decided to jump from the fifth floor of his family home in Leganes (Madrid).

According to Diego’s mother, Carmen González , to the newspaper El Mundo , when she realized that her son was not in the room she started to worry and “look for him like crazy all over the house”. Then she saw in the back of the kitchen, the open screen. She approached it and… noticed its shadow on the floor. Diego had thrown himself into the void because he couldn’t live in this situation any longer, he couldn’t stand another day.

In the newspaper itself, Carmen explains that on the window sill of her home, through which her son threw himself into the void, she found a message that said: “Look at Lucho” (her doll). In it, they found a notebook in which Diego told the reasons that had led him to suicide.

In the following image you can read the sad farewell letter of Diego González: 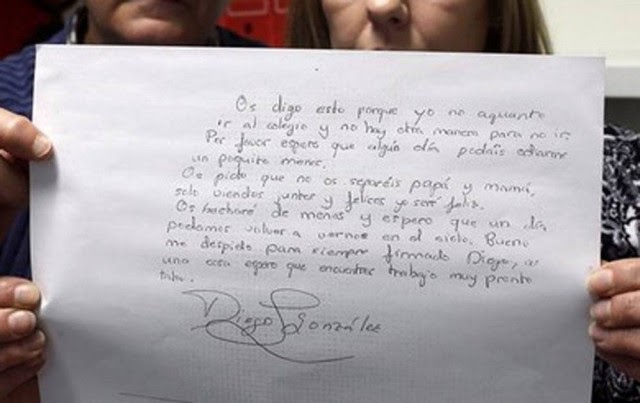 In the text, Diego makes it clear that he could not bear the emotional pain that the bullying was causing him and so he decided to take his own life. Along the lines, he asks his parents to forgive him one day and “hate him a little less”. And he hopes that “they can meet in heaven”.

With this letter, the parents asked that this controversial case be reopened, and the Community of Madrid expressed that it would again open an administrative investigation with a new school inspector. The court also reopened the case to clarify the facts that led this minor to commit suicide.

More cases of suicide by bullying

Diego’s case reminds us that bullying must be detected as soon as possible to avoid major consequences .

But this young man is not the only case of bullying that ends in tragedy. In fact, on August 15, 2016, an American boy, only 13 years old, made the same decision as Diego, and his older sister found his lifeless body on the rooftop. Daniel Fitzpatrick had suffered numerous episodes of bullying in Staten Island (New York, United States).

One of the first cases of suicide by bullying in Spain is that of young Jokin, who at the age of 14 decided to end his life after years of abuse and harassment at his school in the town of Hondarribia.

The psychological damage to people who are bullied can accompany them throughout their lives. A study carried out by King’s College London (2014) states that the negative psychological effects suffered by people with bullying can remain for 40 years after they have been victims of bullying and harassment. This shows the seriousness of the psychological and emotional consequences on the victims of this phenomenon.

Some psychological consequences of bullying are:

There are many causes (personal, family, or school) that can lead a bully to exert this type of violence on classmates. Research seems to indicate that there may be more risk of bullying in larger educational centres, due to the difficulty in surveillance .

Personal factors can also lead to cases of bullying, as low self-esteem of the bully can lead to the bully wanting to feel superior to the bullied. Finally, family models influence the behaviour of bullies, as bullies who have lived with an aggressive parent model are more likely to engage in this type of violence.

The success of the KiVa programme to eradicate school bullying

When we hear about these cases of suicide by bullying, we often ask ourselves: “Are things being done right to prevent this kind of phenomenon in schools? Unfortunately, not all schools apply the same policies to prevent bullying. However, most Spanish schools should take note of the KiVA programme , a method that is being successfully applied in Finland.

In this country, the program is being applied in 90% of the basic education schools and its success is such that it has become an essential tool to value and eradicate school bullying.