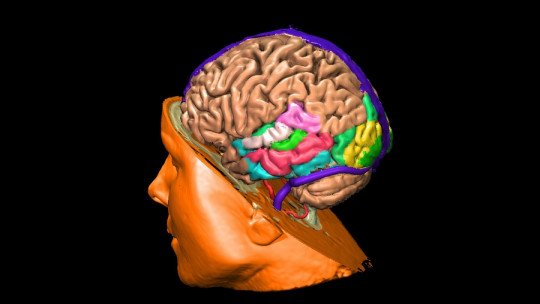 The controversy about the particularities represented by the differentiation between the brains of both sexes has been present in scientific research, both for the purpose of discerning whether there are discrepancies both in intellectual aptitudes and in the capacity for emotional processing.

Let’s see what the anatomical structures are, as well as which hormonal and neurotransmitter substances operate in a particular way configuring the development of the male brain throughout the life process.

These are the hormones and neurotransmitters involved in the functioning of the brain.

It is the hormone responsible for the development of primary sexual characteristics , such as the maturation of the male reproductive organs, and also secondary ones: body hair, voice tone severity or muscle mass index.

Testosterone plays a major role in dominance and aggression, it also activates the circuits of sexual behaviour, as well as those aimed at achieving goals and fighting against potential competitors to maintain a higher hierarchical position.

Apart from its main antidiuretic function, this hormone is involved at a cerebral level in the repertoire of social behaviours , specifically in the protection and defence of personal territory and behaviours oriented to sexual mating.

The main function of this hormone is to act during the first months of gestation in order to eliminate from the future baby all the female physical characteristics, as well as to promote the maturation of those typically male.

It plays an important role in the development of exploratory behavior and in guiding the interest of male infants in everything that involves movement and action.

This substance can act as a hormone or as a neurotransmitter and is mainly associated with the establishment and regulation of social behaviours, affective bonds (marital or parental) and the promotion of aspects such as trust or generosity.

It seems to be activated especially by physical contact and therefore plays an antagonistic role to the aggressive activation caused by testosterone. It is also involved in the development of empathic ability and of generating personal safety or stress reduction circuits.

This hormonal substance is secreted as a response to stress, whose function is oriented to the fight against the perception of potential threats both physiological and emotional in different personal areas.

This substance is the main neurotransmitter involved in the search for pleasure, gratification , motivation for enjoyment and regulates the drive to achieve a certain goal.

It is attributed the label of natural internal drug since it is secreted in large doses generating a powerful and chemically addictive feeling of wellbeing in the face of a given reward, similar to that which can be obtained after the consumption of drugs such as cocaine or amphetamines, for example.

Multiple scientific investigations in Brizendine’s work (2010) conducted in recent decades have identified a number of brain structures that are particularly active in the brains of males .

It seems that the high activity in such areas has been responsible for shaping and developing certain interests and objectives that ultimately guide the behaviour of the male gender.

This area is in charge of the management of sexual activity and mating . It has been observed that it represents an average size two and a half times larger in male than in female individuals.

This brain area regulates the capacity for cognitive empathy. This ability enables the individual to understand the other person’s situation by analysing it cognitively in order to generate an effective solution for coping with it. Studies affirm that this ability is more associated with the male gender.

Unlike this, emotional empathy consists of putting oneself in the other’s place, allowing one to identify emotionally with the feelings of the interlocutor. This last capacity seems to be more developed in women.

This is the zone that regulates the area of defence of territory and personal (or family) status, articulating the response of anger in the face of possible threats in this regard and activating the emotion of fear in the exercise of this protective role.

It is the structure in charge of activating the alarm signal in case of possible personal threats or dangers , and it is the main fear processing centre.

It directs emotional impulses and is activated in men by testosterone, vasopressin and cortisol. Oxytocin, on the other hand, acts as an inhibitor of such emotional activation . Research suggests that it is larger in men than in women.

This area plays a major role in the regulation of social behaviour, the formation of emotions and is responsible for learning and remembering the social image that an individual transmits to others.

Some studies link this area to the readjustment of facial expressions experienced by men to minimize the facial gestures of their male emotional responses.

This set of structures located in the centre of the brain becomes the command centre of the motivational capacity , being the main producer of the neurotransmitter dopamine.

Scientific findings have observed a higher level of activation in the male brain than in the female brain.

This area intervenes in the regulation of pleasure and involuntary pain. It is particularly active during the performance of sexual acts in men.

This neural network controls the capacity for emotional empathy. As mentioned above, its function is less in men than in women .

This structure plays a relevant role in the cognitive-emotional processing of possible threats , exercising as a centre of the analysis of potential male emotional distress.

It acts in decision making by assessing possible consequences, fear of punishment, concerns in general, the fear response in relation to sexual behaviour, mainly. It has been observed that its size is smaller in men since testosterone conditions its functionality.

This structure is one of the most complex and recent in the human brain. In it, rational, logical and socially appropriate processing is carried out .

It focuses on the relevant aspects at each moment, on cognitive analysis of the different options for decision making and inhibits the most primitive and maladaptive impulses. Research has concluded that this area matures earlier and appears to be larger in female subjects.

Stages in the hormonal and neurocognitive development of the male brain

The above can now become a guide to get a clearer picture of male brain function. Let’s see how the hormonal-anatomical operation becomes concrete in the different vital stages of the man.

A pronounced combination of segregation of the SIM hormone and testosterone in the first year of life enhances the activation of the brain circuits responsible for the exploratory behavior of the environment, and the focus of interest in all types of stimuli involving muscle movement, especially with a more competitive than playful character.

Subsequently, testosterone levels gradually decrease until the age of 11.

From the age of 11, the production of testosterone and vasopressin increases by 20%, while SIM decreases. This leads to a considerable increase in the activity of sexual behaviour and personal territory defence circuits .

Simultaneously, the activation of the areas that promote visual sexual attraction takes place, significantly increasing the functionality of the sense of smell in relation to the action of pheromones, as well as modifying auditory perceptual sensitivity .

More activity has also been observed in the circuits that regulate the sleep cycle, progressively decreasing the volume of daily nightly rest hours. This means that the main interests for the child are the maintenance of territory and personal hierarchy, social interaction and the fixation on the body of the sex he or she is attracted to.

With stable high levels of testosterone, the high activity of the brain circuits that regulate both mating behaviour and interest in sex, as well as the protection of personal territory and hierarchy, is maintained.

In heterosexual men, the fixation is on finding attractive female sex partners and watching for potential male competitors. In relation to the issue of social hierarchy, the main goals in this stage are oriented to consolidate certain aspects related to social status such as a good professional position or a good salary.

During the couple’s gestation stage, testosterone levels have been observed to decrease significantly and prolactin volume has been increased. This fact causes a decrease in the desire of the sexual impulse and increases the activity of the circuits that help to establish care and paternal-filial bonding behaviors.

Thus, the main goal is the protection of the family , from which the man focuses on his role as economic and emotional provider and to develop a greater sensitivity to the basic needs of the baby.

From about the fifth decade of life, testosterone levels decrease considerably, although some fixation remains due to the maintenance of personal territory and sexual interest, but with less impulsive activation.

The most relevant objectives for men are associated with the education of children and maintaining an adequate status at the professional level. In the so-called andropause (the equivalent of the menopause in men), there is a very considerable decrease in hormone segregation in general, although it has been observed that oxytocin levels are increasing during these vital stages.

This leads the individual to focus on his own emotional well-being in different personal and social areas: health, professional career or family relationship (with regard to his partner, as well as children and grandchildren). Due to the increased activity of this last hormone , the activity of the affectivity and sentimentalism circuits is increased , decreasing the general response of aggressiveness and competitiveness.

The above is intended as an explanation of a series of scientific generalities that can serve as a guide when it comes to understanding in greater detail the type of biological predispositions in the brain associated with the male gender.

However, this does not mean that the influence of the environment and the contextual factors in which the individual develops do not have a determining influence on the way in which the behaviour of each particular subject is finally exteriorized. For this reason, the information collected in the text should be taken as a set of indicative and theoretical data, avoiding the conclusion that male behaviour is only mediated by his biochemical or organic characteristics.

Thus, one of the greatest consensuses that the scientific community has managed to reach is to assume how the interaction between genetic or biological predispositions combine with external or environmental factors to ultimately configure the behavior and functioning of human beings.