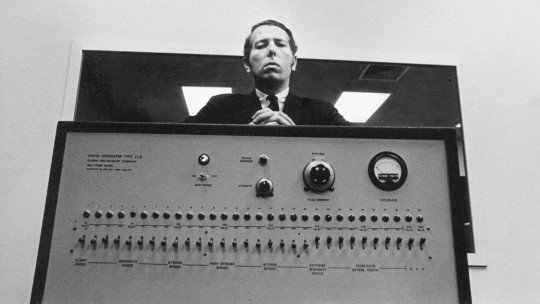 Can any human being commit the most atrocious crimes against humanity just out of obedience to authority? This is a question that many scholars have asked themselves throughout the 20th century, especially after witnessing massive crimes against humanity such as the death camps of the Third Reich or the wars between economic powers. Borderline circumstances in which violence and death were perceived with indifference by a significant part of the population.

In fact, it has been a good handful of researchers who have gone a step further and tried to find the psychological keys that explain why, in certain circumstances, human beings are capable of transgressing our moral values.

Stanley Milgram was a psychologist at Yale University who conducted a series of experiments in 1961 aimed at measuring a participant’s willingness to obey orders from an authority, even when these orders might cause a conflict with his value system and conscience.

To what extent are we fully aware of the consequences of our actions when we make a hard decision to obey authority? What complex mechanisms are involved in obeying acts that go against our ethics?

The preparation of Milgram’s experiment

Milgram recruited a total of 40 participants by mail and by advertisement in the newspaper inviting them to take part in an experiment on “memory and learning” so that, in addition, for the simple fact of participating they would be paid a figure of four dollars (equivalent to about 28 today) assuring them that they would keep the payment “regardless of what happens after their arrival”.

They were told that three people were needed for the experiment: the researcher (who wore a white coat and acted as an authority), the teacher and the student. The volunteers were always assigned the role of the teacher by a false draw, while the role of the student was always assigned to an accomplice of Milgram. Both teacher and student would be assigned in different but joint rooms, the teacher always observed with the student (who was in fact always the accomplice) being tied to a chair to “avoid involuntary movements” and electrodes were placed on him, while the teacher was assigned in the other room in front of an electric shock generator with thirty switches that regulated the intensity of the shock in increments of 15 volts, ranging from 15 to 450 volts and that, according to the researcher, would provide the indicated shock to the student.

The mechanics of the experiment

The recruited subject or teacher was instructed to teach word pairs to the learner and that, in case he made any mistakes, the student was to be punished by applying an electric shock, which would be 15 volts more powerful after each mistake .

Evidently, the student never received any shocks. However, to make the situation realistic for the participant, after pressing the switch, a previously recorded audio was activated with wailing and screaming that increased with each switch and became more whiny. If the teacher refused or called the researcher (who was near him in the same room), the researcher responded with a predefined and somewhat persuasive answer: “please continue”, “please go on”, “the experiment needs you to go on”, “it is absolutely essential that you continue”, “you have no other choice, you must go on”. And in case the subject asked who was responsible if something happened to the student, the experimenter simply answered that he was responsible.

During most of the experiment, many subjects showed signs of tension and distress when they heard the screams in the adjoining room that were apparently caused by electric shocks. Three subjects had “long and uncontrollable attacks” and while most subjects were uncomfortable doing so, all forty subjects obeyed up to 300 volts while 25 of the 40 subjects continued to apply shocks up to the maximum level of 450 volts.

This reveals that 65% of the subjects reached the end, even when in some recordings the subject complained of heart problems . The experiment was concluded by the experimenter after three 450 volt shocks.

The conclusions of the experiment reached by Milgram can be summarized in the following points:

A) When the subject obeys the dictates of authority, his conscience ceases to function and there is an abdication of responsibility.

B) Subjects are more compliant the less they have contacted the victim and the further they are physically from the victim.

C) Subjects with an authoritarian personality are more obedient than non-authoritarian ones (classified as such, after an evaluation of fascist tendencies).

D) The closer you are to authority, the more obedient you are.

E) The more academic training, the less intimidation authority produces, so there is less obedience.

F) People who have received military type instruction or severe discipline are more likely to obey.

H) The subject always tends to justify himself to his inexplicable acts.

Criminological relevance of the experiment

After World War II, the war criminals (including Adolf Eichmann) were tried for the Jewish holocaust. The defense of Eichmann and the Germans when they were on trial for crimes against humanity was that they were simply complying with and following orders , which later led Milgram to ask the following questions Were the Nazis really evil and heartless or was it a group phenomenon that could happen to anyone under the same conditions? Could it be that Eichmann and his million accomplices in the holocaust were only following orders from Hitler and Himmler?

Obedience to authority, a principle that would explain institutionalized violence

The principle of obedience to authority has been defended in our civilizations as one of the pillars on which society stands. On a general level, it is the obedience to authority that allows the protection of the subject, however, the exacerbated obedience can turn out to be a double-edged sword when the assisted discourse of “only obeying orders” exempts from responsibilities and disguises sadistic impulses as duty.

Before the experiment, some experts hypothesized that only 1% to 3% of the individuals would activate the 450 volt switch (and that these subjects would also experience some pathology, psychopathy or sadistic impulses). However, it was ruled out that some of the volunteers had any pathology , as well as aggression was ruled out as a motivation after a series of different tests on the volunteers. In view of the data, Milgram postulated two theories to try to explain the phenomena.

First theory: conformity with the group

The first one, based on the works of Asch’s conformity , states that a subject who has neither the ability nor the knowledge to make decisions, (particularly in a crisis) will transfer the decisions to the group .

The second, more widely accepted theory is known as reification , and refers to the fact that the essence of obedience consists of the person being perceived only as an instrument for the realization of the other person’s wishes and therefore, not being considered responsible for his or her acts. Once this “transformation” of self-perception has occurred, all the essential characteristics of obedience occur.

A Before and After Experiment in Social Psychology

Milgram’s experiment represents one of the social psychology experiments of greatest interest to criminology when it comes to demonstrating the fragility of human values in the face of blind obedience to authority .

Their results showed that ordinary people, at the behest of a figure with just a little authority, are capable of acting cruelly. In this way criminology has managed to understand how some criminals who have committed savage genocides and terrorist attacks have developed a very high level of obedience to what they consider authority.