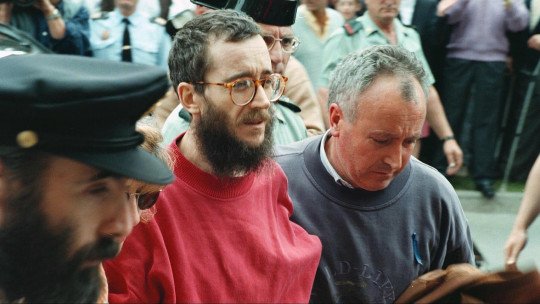 Ortega Lara humbly served as a prison officer. He was kidnapped in January 1996 by a commando of the terrorist organization ETA ( Euskadi Ta Askatasuna ). His captors surprised him near his car, in the garage of his own house, when he was preparing to move to his place of work. At that moment, two individuals, at gunpoint, forced him into a kind of sarcophagus located in the trunk of a van. In complete darkness, he was moved to a hiding place from which he would not come out for a long time.

Forced to stay in a hole for 532 endless days

Shortly afterwards, the terrorist group announced the responsibility for the kidnapping in the state media. It asked, in exchange for Ortega’s release, that the organization’s prisoners be brought to the prisons of the Basque Country . A demand that, as expected, was ignored by the Ministry of the Interior, then headed by Jaime Mayor Oreja.

The Spanish State did not accede to the terrorists’ claims, so Ortega Lara was held indefinitely in an underground hole built in an abandoned industrial building in the town of Mondragón , Gipuzkoa. Locked up in that dark cage, Ortega Lara remained living, without the possibility of leaving for a single moment, in a zuloid in which he could barely move, with terrible humidity, without any contact with the outside and with the constant threat that the terrorists would decide to execute him. Despite all the circumstances that seemed to play against a desperate and increasingly emaciated Ortega Lara, the police managed to tighten the siege on the authors of his kidnapping and captivity, to the point where the captors confessed the location of the hiding place where Ortega Lara was staying. He was released in July 1997, a year and a half after the day he was kidnapped.

Documentary on the Ortega Lara case

If you want to know all the details of the case and the experiences lived by José Antonio Ortega Lara, do not miss this documentary made by TeleMadrid .

One of the people who knows this case best is Dr. José Cabrera Forneiro, a renowned forensic psychiatrist and a regular in the media in our country.

We wanted to share with him a conversation about the case of José Antonio Ortega Lara, not only because of the social impact it caused but also because of everything related to the mental health of an individual who had to endure, literally, hell in life. Dr. Cabrera is one of the people who knows best what happened and what the kidnapped man had to go through, and he does not hide the torrent of emotions that we all suffer when remembering this gruesome event in the history of Spain.

Bertrand Regader: Good morning, Dr. Cabrera. It is an honor to be able to share this space with you in order to analyze the Ortega Lara kidnapping case. It has been twenty years since José Antonio Ortega Lara was kidnapped and held by ETA. How did Spanish society experience those moments? What are your personal feelings when you recall this murky episode?

Doctor José Cabrera : Spanish society puts up with everything, especially when the news is in the media and “far from us”. That episode was lived as one more addition to the cloud of attacks, threats and extortion of the moment, we would say that it was almost lived as if in a state of anaesthesia, and it was more the energy that the Security Forces and Bodies and the media poured in than the social fabric.

My personal feeling was one of disgust towards merciless kidnappers who were fighting an unjust cause by beating up a simple civil servant.

We are talking about a person who was held against his will in an uninhabitable zone, with no possibility of getting out and knowing that, most probably, ETA was going to murder him one day or another. How does a human being face an existence with these terrible conditions and what psychological characteristics helped Ortega Lara to endure so much time?

The human being throughout history has endured the most terrible tortures, punishments, revenge and situations, voluntarily or involuntarily, one only has to apply the instinct of survival and find a meaning to stay alive.

In the case of Mr. Ortega Lara, three conditions came together that helped him: he was a believer, he had a family that he loved and wanted to see again, and he was a methodical man with a great inner life, these three were the pivots of his survival.

In an interview with TeleMadrid, Ortega Lara confessed to planning his suicide by various mechanisms, although he never pressed that button. Is this normal in cases of prolonged kidnapping?

Suicide is always presented in a final situation of hopelessness in which the suffering cannot be endured any longer and the way out does not exist. It is a defence mechanism in the face of sensory and emotional deprivation, in other words “this is as far as I’ve come”.

However, experience tells us that those who have endured inhumane captivity almost never execute a suicide, and yet after some time these same people have already been released if they have ended their lives, for example the case of Primo Levi .

After a long ordeal, the police found the whereabouts of Ortega Lara and were able to free him. According to Ortega Lara himself, when the civil guard who went to rescue him entered the zulo, the hostage believed that this individual was in fact a disguised terrorist who was going to execute him, in a kind of macabre scene. Why do you think he reacted in this way?

In a state of silence and absence of external references, only the captive’s own ideation intervenes, creating in a compensatory way a life around the few contacts he has with his captors.

In this situation Mr. Ortega Lara, who was constantly waiting for death, could not understand that suddenly a person in a Guardia Civil uniform appeared to free him, he simply could not fit in his head, and he simply believed that the end had come.

When he was released, Ortega Lara had lost more than 20 kilos, in addition to having atrophied vocal cords and sense of sight. We all have in our retina the image of Ortega, emaciated and bearded, walking with the help of his relatives shortly after the rescue. But I suppose the psychological aftermath was even more terrible and lasting.

The physical prostration of captivity usually goes back in time, it’s a matter of reusing the muscles, voice, sight, senses… but the psychological impact is something else.

The sensation of impunity of his captors, the feeling of injustice towards his person, the emptiness of loneliness, the distance from his loved ones, the incomprehension of the facts and the permanent threat of death, modify for life the personality turning the future into something completely new and different from what is expected from a normal life, and with that and the memories one has to keep on living, that simple.

Much has been said about the moral and psychological integrity of José Antonio Ortega Lara, and it is not for nothing. What are the mental strengths that an individual must develop to return to normal after living such a dire situation?

The first thing to do is to understand what happened, that is to say, to accept that it was a criminal action by a terrorist group that took him by chance, in order to avoid culpability that is not uncommon in these cases. The second thing is to gradually recover from the physical aftermath, little by little and far from the hustle and bustle. The third, to abandon yourself in the arms of the people who love you and are the key to your resistance, to enjoy their mere company, simple conversations, recounting what happened to them and what captivity deprived you of.

And finally, let yourself be advised by a professional in medicine and/or psychiatry to follow a gentle treatment that restores the alert-dream cycles and the discouragement generated by suffering.

Ortega Lara also said that during his captivity he talked to himself, imagined his wife was with him, and said sentences aloud to her. Do you think this is useful in situations like that?

Yes, it is definitely very useful to create an imaginary figure to talk to, to accompany us, to keep us hopeful and to mitigate our physical loneliness.

The normal thing is to recreate the person of the closest family, and sometimes not just one but several, to establish complete and dense conversations that fill the endless day and to say goodbye to them at bedtime.

I don’t want to end the interview without asking him about the other side of the coin. The kidnappers, the terrorists. It only occurs to me that holding a person for so long, a simple civil servant with no political responsibilities and with a family… can only be explained by the most inhumane fanaticism. Ortega often refers to Bolinaga, the head of the operation, as a poor wretch, a wretch.

You will allow me not to utter a single word about these subjects who stain the concept of human dignity, not one word, that they serve their sentences in solitude and oblivion, is more than they offered to their victims.