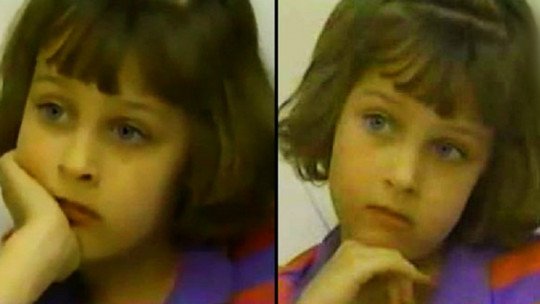 Many will already know the case of Beth Thomas , an intriguing story that is having a strong impact on social networks and that has left no one indifferent. For those who have not yet heard of this girl, as well as for those who have, we recommend continuing reading this article.

Beth Thomas: The Story of the Psychopathic Girl

This story is about a girl who lost her mother when she was only one year old . She and her brother were left in the care of their biological father, who sexually abused the two children. Fortunately, the abuse was detected by doctors and the children were taken in by a social worker six months later.

Luckily for Beth and her younger brother Jonathan, both were adopted by a Christian couple who were excited about being parents but could not conceive. Everything seemed to be going well until Beth started to manifest that she was having very strange nightmares , and they realized that something was not right.

The little girl’s nightmares were about a man who “fell on top of her and hurt her with a piece of him. In addition, Beth manifested violent behaviour towards her brother, her parents and animals (which she even killed). In addition to anger, they also found that Beth manifested inappropriate sexual behavior: the girl masturbated publicly and excessively, even causing bleeding.

These facts made the parents consider the possibility of going to a psychologist . Precisely in the course of the diagnosis and psychological therapy to Beth, the video that has travelled the world is recorded: an interview with Beth carried out by Dr. Ken Magid, a clinical psychologist who specialises in the treatment of children who are victims of severe sexual abuse. What this psychologist discovered about the causes and effects of sexual abuse is being studied in all schools of psychology.

The chilling dialogues between Beth and her psychologist

This is a short transcript of the beginning of the interview:

-Dr. Ken: Are your parents afraid of you?

-Dr Ken: What would you do with them?

-Dr Ken: What would you do with your brother?

-Dr Ken: Who would you like to stick pins in?

-Dr Ken: What would you like to see happen to them?

The little girl admitted to physically abusing her brother

Beth admitted, in her conversations with Dr Ken and with total coldness, having mistreated her brother since always, hitting him with his head on the floor, sticking pins in his whole body and in his intimate parts, stretching and kicking his genitals… She even explained that she once tried to kill him, and only stopped because her parents discovered her. She admitted that she had also seriously thought about killing her parents on several occasions and that she regularly mistreated her pets. Not content with that, she went so far as to kill several animals that prowled her backyard.

In the face of all these facts that she herself was recounting, Beth admitted not feeling any kind of remorse or guilt , her tone of voice in the face of all her statements was cold and calm, as if she were explaining any trivial anecdote. Asked why she acted this way, she replied that she wanted to make her feel everything she had felt in the past during her father’s abuse. Likewise, when asked by the doctor if she was aware that these acts would cause suffering in the other person, she calmly admitted that this was precisely what she wanted.

Placement in a special centre and psychological treatment

After a long interview, the psychologist obtained enough information to lead him to decide to place the girl in a treatment centre for children with different behavioural disorders. Beth was diagnosed with a severe attachment disorder , which is characterized by the development of the inability to establish healthy and appropriate relationships, due in this case to the history of sexual abuse and mistreatment by her father.

Attachment disorder needs urgent psychological attention, otherwise it could become a danger to Beth herself and her relatives, due to the complete lack of empathy she manifests, which could be comparable to disorders such as sociopathy or psychopathy. The reason why Beth was not diagnosed as a psychopath at that time is because at that time the existence of dissociative personality disorder (antisocial personality disorder before the age of 18) was not yet known, about which there is still an extensive debate among mental health academics.

The treatment imposed on Beth was very strict and orderly. It was specially designed for children with the same disorder, who find it very difficult to respect rules and habits. During the night, and to prevent her from hurting other children, Beth was locked in a room . She had to ask permission for everything from going to the bathroom to even drinking water.

As time went by, the restrictions became less strict and Beth improved progressively .

At the end of the video, we can see the breakthrough in Beth’s treatment. Over the years, we can see Beth as a person with the capacity to empathize and be aware of the consequences of her actions.Obviously, her apparent ‘evil’ had its genesis in the continued abuse she suffered as a baby, and her case serves to illustrate the dire consequences of physical and psychological abuse at a young age.

Currently, Beth leads a normal life and works as a nurse . Her professional merits have earned her several awards.

This case leads us to the following conclusions: the importance of good parenting, especially in critical periods of the child. But it also tells us about the effectiveness (at least in this case) of psychological therapy, even in cases that are extremely serious and may seem irreconcilable. What were the psychotherapeutic keys to his recovery?

This total psychological recovery of little Beth could be achieved by making the girl aware of her actions, increasing her self-esteem, as well as cementing functional social habits and behaviors, for example getting her to accept certain rules and be able to manage, channel and understand the reason for her anger.

We recommend you to watch the documentary of Beth’s entire case, carried out by the HBO network in 1992. It is really interesting and it is convenient to know this case in depth, because of all that it can teach us as professionals and as human beings.