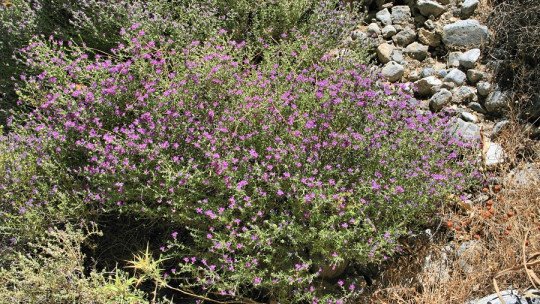 Chamomile, rosemary, oregano or lavender are plants that have been highly valued and known since ancient times, and which have been used by humans in many different ways throughout history.

We probably recognize them mainly as a condiment at a gastronomic level, but they also have interesting medicinal properties. In addition to those mentioned above, one of the most outstanding and most common is thyme, which is used in a large number of presentations and formats. One of them is the thyme infusion , which we are going to talk about throughout this article.

We call thyme a small plant or aromatic herb that is known at least since the Ancient Age, there being records of various uses given by Greeks and Egyptians. It belongs to the family of the Lamiaceae, as does rosemary or basil, and there are many existing varieties.

Thyme has historically been used in many different ways , for example as a cosmetic or a flavouring (not in vain does its name come from the Greek word thymos, which refers to its powerful smell), in funeral rituals and especially as a condiment in the form of a spice. It is a plant that is predominantly found in the Mediterranean, being common in countries such as Spain or Greece.

It is also known for its medicinal properties, derived from the large number of essential components and different types of nutrients, vitamins, antioxidants or minerals.

Thyme can be used in many ways, being consumed both as a spice and in oils or even as an infusion . In the latter case, its preparation is extremely simple, as we shall see below.

How to prepare an infusion?

Preparing a thyme infusion is relatively simple, requiring only infusion and water. Despite this other herbs are also occasionally added, such as rosemary . In addition, sugar, sweetener, honey or some kind of element is usually used to give the infusion a slightly sweeter taste.

In order to prepare it, first of all we have to put a sufficient amount of water (the exact amount can vary depending on the amount we want to prepare) in a pot or container and heat it on the fire, until it boils. Once the water is boiling, add the thyme and let the mixture boil for ten to fifteen minutes . Once this is done, remove it from the heat and let it rest. Finally, the mixture is filtered and if desired the type of sweetener is added.

Thyme infusion is a very common type of preparation, which, as we have said before, presents a series of very beneficial effects for health by taking advantage of and introducing into the body the nutrients and healthy components typical of this plant .

It can be consumed by people of any age, including children, although there are some exceptions, as we will see later. Thus, infused thyme has a number of interesting properties, some of which are discussed below.

The high quantity of polyphenols in thyme causes this herb to have a clearly anti-inflammatory effect, and it can help to reduce inflammation of lesions and wounds as well as those associated with a bacterial infection .

Thyme is commonly used when we have some kind of respiratory problem, possessing multiple properties very useful for treating various annoying and painful conditions. It has a bronchodilator effect, which helps to open the lungs, while is antitussive and antispasmodic, relaxing and relieving irritation of the airways . It also promotes the expulsion of mucus and phlegm.

Thyme has been shown to be useful in treating gastrointestinal discomfort as well as reducing gas. It also increases the synthesis of gastric juices and reduces abdominal bloating .

Thanks to its multiple components, thyme has a significant antiseptic effect, which is why is often used in its infusion poured onto cloths or gauze to help clean and disinfect wounds on the skin or even the eyes. It also helps healing, promoting recovery from injuries.

Thyme also contains an interesting amount of flavonoids, substances which can be considered antioxidants . This makes it possible to reduce cellular ageing and damage caused by free radicals, which can affect the skin, the organ and even the brain.

In addition to its antioxidant, antiseptic and anti-inflammatory properties, thyme is very useful in strengthening the immune system, among other things because of its high content of vitamins, iron and minerals . This makes it difficult for infections to occur and even makes it possible to combat cases of anaemia.

Many women experience great discomfort during menstruation or the period immediately preceding it, sometimes in the form of colic. Fortunately, thyme infusion has a calming effect on these pains , partly also because of its anti-inflammatory effects.

In addition to all the above, thyme is a diuretic element that facilitates urination, which in turn facilitates the elimination of harmful elements through the urine and hinders infections in the genitourinary system.

It has been observed that thyme infusion also has an effect on the psyche, having a relaxing effect that allows to lower the level of activation, tension and anxiety . In addition, it also reduces blood pressure.

Thyme infusion, as we have seen, is certainly a good help in different conditions due to its multiple medicinal properties. However, the truth is that it can also be harmful in some situations.

Specifically, it is recommended that excessive consumption be avoided in those with heart problems , as it can cause bradycardia which in some cases can be dangerous.

It should also be avoided by those with ulcers and chronic digestive problems , people with constipation (could aggravate this situation) or allergies to this spice. Finally, its consumption should be avoided during pregnancy, since it can generate contractions, miscarriages or premature pregnancies. Neither should it be consumed during lactation, as it reduces the quantity and quality of milk.