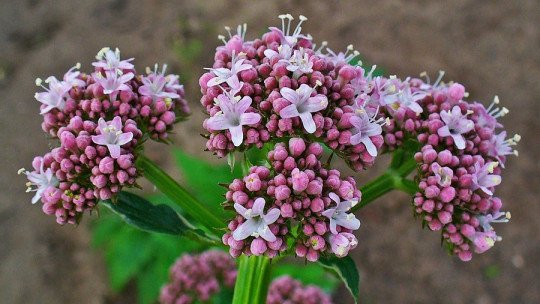 Today, thanks to advances in science, medicine is capable of curing a wide variety of diseases. But before medicine developed to an acceptable level, the different peoples of the world used the knowledge that tradition and observation of the effects of various products present in nature in order to try to alleviate ailments.

One of the main elements used are the so called healing or medicinal herbs , which have properties that can help to alleviate discomfort and various minor alterations. However, it must be taken into account that they provide relief of symptoms and help to improve wound healing, but they cannot replace conventional medical treatments or make serious diseases disappear.

There is a great variety and diversity of these plants, given the diversity of species described by botany. Next we will see a selection of the best healing herbs.

What do you call healing herb?

Before going into some of the most relevant healing herbs, it is necessary to define what a healing or medicinal herb is, which is often identified as a medicinal plant. Although it is generally used as a synonym for the latter concept (including also, for example, trees), technically when we speak of healing herbs we are referring to all those types of plants with stems configured by soft and green (never woody) tissue and that die once they have produced offspring, generally at the end of the season, which have medicinal properties beneficial to human health.

Nevertheless, should never be used as a substitute for medical treatment , and if taken, possible interactions with drugs and other interventions with which they could have dangerous interferences should be consulted. In addition, it should be noted that some of the properties attributed to many of these herbs have not been scientifically proven, and in other cases their beneficial effects have been shown to be less efficient than expected.

A selection of the best healing herbs

This is a list with about twenty of the best healing herbs, most of them widely known and even in many cases widely used by a large part of the population. It must be taken into account that although they have positive effects on health, most of them have some contraindication or are not recommended in specific situations, and even some of them have abortive properties.

The queen of the infusions, chamomile is one of the best known and most used healing herbs when trying to treat and reduce pain and discomfort in the gastrointestinal tract. It also has a relaxing and anti-inflammatory effect, which makes it useful for treating muscle or headaches. It also has antibacterial properties that make it useful for cleaning wounds or as a rinse.

A common seasoning in our kitchens, rosemary is another herb that has relevant medicinal properties. Rich in antioxidants and with a large number of essential components for health , this plant contributes to delaying aging and cell death caused by free radicals, as well as helping to improve concentration and performance and relieve and enhance recovery from respiratory or digestive problems (including facilitating the expulsion of gases), facilitate menstruation and increase energy levels.

It also has, among others, antibacterial, liver protective, healing, expectorant and analgesic properties. However, like most of the rest of this list, too much of it can be toxic.

Another known medicinal herb is sage, which despite having abortive properties and being contraindicated in people with kidney problems or in nursing mothers and being toxic in high quantities, has antibiotic and antiseptic properties , decreases diarrhea and glycemia, provokes the activation of appetite and increases energy and helps to decrease inflammations and intestinal pain. It is also muscle relaxant and appears to facilitate stimulation and cognitive activity.

Probably a product that we have all used in cooking, mint is an herb that is often used in medicinal products. Besides having diuretic properties , it has been observed that it facilitates the functioning of the digestive system and the liver, besides being anti-inflammatory and having expectorant and antitussive properties, contributing to the synthesis of sweat, having analgesic capacity and being stimulating and activating.

An herb especially known for its soothing and relaxing properties, similar to lime blossom. Helps to facilitate sleep and is especially used by people with insomnia. It also relaxes and allows you to calm the anguish, sadness or anxiety while reducing disorders such as headaches, muscle pain, arrhythmias or tachycardia. It is also anti-inflammatory.

The St. John’s wort or hypericum is an interesting medicinal herb that is especially known for the fact that it presents properties that help fight psychic problems as serious as depression, having an antidepressant effect. In addition to this, it also helps to alleviate problems of anxiety, pain and insomnia, and is useful in helping various health problems related to the menstrual cycle, stomach problems and even problems related to insulin.

However, it is important to note that can interact negatively with drugs , especially antidepressants.

Also called queen of the meadows, the meadowsweet is one of the healing or medicinal herbs from which a component of great importance in medicine has been extracted, specifically from its flowers (although it is also present in other plants): salicin .

This name may not ring a bell, but if we add that acetylsalicylic acid comes out of it we will quickly see that it is the main active ingredient in aspirin. This component therefore has an analgesic effect. It also seems to have antibacterial properties, as well as anticoagulant and anti-inflammatory.

This plant, widely used in cooking, also has interesting medicinal properties. Firstly, it has been observed that it helps to treat digestive problems, such as heaviness or constipation. It also has antispasmodic activity at a visceral level, in addition to being a diuretic and allowing for the reduction of liquid retention . Although they are not the only ones, other relevant properties are those that contribute to the reduction of blood pressure or to serve as support in the regulation of the menstrual cycle or to reduce discomfort from it and from the climacteric.

Also called licorice, this herb that is widely known in the elaboration of the sweet of the same name has also been attributed with medicinal properties. Specifically has anti-inflammatory and antispasmodic properties, in addition to reducing acidity . It also helps to reduce body temperature and has an anaesthetic effect.

This plant, despite not being among the best known, has interesting properties that are useful. Among them we can mention the fact that it helps in the treatment of kidney and bladder problems, intestinal problems such as diarrhea (it is astringent), has antihemorrhagic and antiseptic properties, is anti-inflammatory and satiating and contributes as an expectorant to the recovery of respiratory problems. It is also rich in antioxidants and appears to help lower blood pressure and blood sugar.

Mallow is another herb with healing or medicinal properties, in this case also being anti-inflammatory, antitussive and expectorant, diuretic, antiseptic (useful in wounds) and with a very slight hypoglycemic action. Also facilitates intestinal transit, being a laxative . Useful in inflammations, arthritis, dental pain, gastroenteritis or constipation, among others.

This herb has powerful anti-inflammatory, healing and antiseptic properties and is very useful for use on skin wounds. It promotes the proper functioning of the menstrual cycle and has calming effects and helps in the treatment of dental and digestive tract problems, among others.

Another of the herbs considered curative or medicinal is marjoram, which is sometimes used in cooking but also has antibacterial, antifungal, antiseptic, expectorant, antispasmodic, sedative and appetite-generating properties. It is useful for respiratory and digestive problems , and also reduces the absorption of carbohydrates.

Verbena is an herbaceous plant of which some of its variants have interesting medicinal properties. One of them, known as St. Elizabeth’s herb , is characterized by its calming and relaxing effects , while promoting a positive mood. It is useful for reducing nervousness, insomnia or headaches. It has also been found to be an excellent diuretic, as well as an astringent that makes diarrhoea more difficult and promotes tissue retraction. In addition, it is an antioxidant.

When we think of oats, we probably imagine their use at a culinary level in the form of flakes. But in addition to that, this herb has very relevant properties at a medicinal level. First of all, it is worth noting that this plant has the ability to strengthen our immune system and increase energy levels , among other things because of its high number of vitamins. It also helps to reduce bad cholesterol and increase good cholesterol, as well as having a laxative effect.

Commonly used as a condiment, coriander also has medicinal properties. Among them, it contributes to reducing cholesterol levels and reduces blood glucose , in addition to being diuretic and promoting the elimination of toxins (especially at the level of heavy metals), having an anti-inflammatory, antiseptic and even antispasmodic effect. It also favors the appetite, facilitates the expulsion of gases and can serve as an expectorant.

Widely valued for its beauty on an aesthetic level and sometimes also consumed on a culinary level, dandelion is also one of the healing or medicinal herbs. It has been observed that it is diuretic and stimulating, as well as beneficial for the kidneys and liver (helping to filter the blood and prevent bleeding). It stimulates the appetite and is anti-inflammatory and healing . However, it may be harmful for pregnant women or people with bipolar disorder.

Again known mainly for its use as a condiment, this herb also has medicinal properties. Among them is the fact that it stimulates the appetite, makes vomiting difficult and has antitussive, anti-inflammatory and antibiotic properties, among others . It is also rich in antioxidants, diuretic, slightly anticoagulant and improves our immune system.

Another exponent of healing or medicinal herbs is Geranium robertianum or St. Robert’s wort. This plant is often used in order to help stop bleeding . It is also astringent, both at the blood and intestinal level (being useful in diarrhoea) and is useful as a diuretic. Curiously, and despite the fact that it tastes good, unlike most of the other exponents on the list, St. Robert’s wort generates an aversive smell when it is squeezed.

We end the list with a widely known and loved herb in our kitchens: oregano. This plant is known to have a protective effect on the liver, to have an antihistamine and anti-inflammatory effect, to help expel gas, to strengthen bones and skin, to reduce pain, to reduce blood glucose in diabetics, to have an expectorant effect, to be rich in antioxidants and even to prevent cancers such as breast cancer.