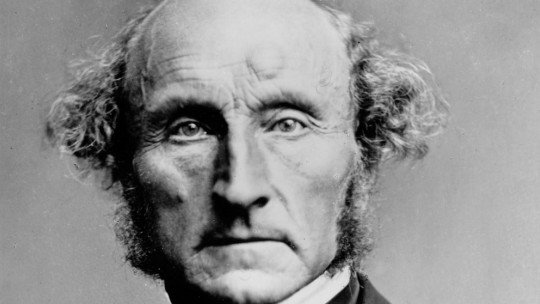 This is a selection of phrases by John Stuart Mill, a key figure in utilitarianism . The latter is one of the most important moral philosophies of the nineteenth century, which states that what is useful is good and, therefore, the value of behavior is determined by its usefulness.

Since John Stuart Mill’s ideas were very influential, in the following lines we have prepared a compilation of his best quotes. John Stuart Mill’s phrases reflect his tendency towards liberal ideas based on equality before the law and the defence of individual rights.

1. Every properly educated human being has a sincere interest in the public good

2. The principle that each party is the best judge of its own interests, as interpreted by the persons making such objections, would prove that Governments should not perform any of the duties accorded to them, i.e. that they should not actually exist

A quote from this author that invites the reader to deep reflection.

3. Every man who is intelligent and generous enough to contribute his effort to the enterprise, however small and insignificant, will obtain from the struggle itself a noble enjoyment that he will not be willing to sell for any selfish pleasure

When one is intrinsically motivated , one does not need much to feel fulfilled.

4. In reference to God he once said something like this: Think of someone capable of populating hell or creating paradise.

Seeing the world, God is able to do both good and evil.

5. Do as you would have them do with you and love your neighbor as yourself

Advice that refers to not doing to others what we do not want them to do to us.

6. The value of a nation is nothing more than the value of the individuals who make it up

A nation is moved by the individuals who are part of it.

7. Originality is the only thing whose usefulness vulgar spirits cannot understand

Mechanical people do not give free rein to their originality, because that requires an inflexible mind.

8. Never, in truth, did I waver in the conviction that happiness is the test of every rule of conduct and the end of life

For this author, the goal of every human being is the search for happiness .

9. A democratic constitution that does not rely on democratic institutions in its details, but is limited to the central government, not only is not political freedom, but often creates a spirit that is precisely the opposite, bringing the desire and ambition for political dominance down to the lowest levels of society

Democracy represents the interests of the people, and should never be the other way around.

10. The love of money is not only one of the most powerful driving forces in human life, but in many cases it is desired for its own sake; the desire to possess it is often as strong as the desire to use it, and it continues to grow as all desires that aim at ends beyond money die, but are achieved with it

There are many people who pursue money and that is their great source of motivation.

11. It is better to be an unsatisfied man than a satisfied pig

Satisfied humans struggle to get out of their comfort zone. He’s a human being in change.

12. All good things that exist are the fruit of originality

Originality is key to adapting to change.

13. Every action is performed with a view to an end, and it seems natural to suppose that the rules of an action must take all their character and color from the end to which they are subordinated. When we are pursuing a purpose, it seems that a clear and precise knowledge of the purpose would be the first thing that is necessary, rather than the last thing that is expected

A reflection that deals with motivation and how this implies that people are constantly on the move.

Some words that deal with freedom and originality .

15. Each is the natural guardian of his own health, whether physical, mental or spiritual. Humanity gains more by allowing each one to live in his own way than by forcing himself to live in the way of others

A phrase about freedom. Everyone must live in his own way.

16. Of these false theories, the most notable is the doctrine of the protection of national industry; a phrase that means the prohibition or restriction by means of strong customs duties, of those foreign goods that can be produced in the country

A quote that deals with the phenomenon of international trade.

17. Over himself, over his body and over his mind, the individual is sovereign

We’re all masters of ourselves. In this sense, we are free.

18. A man’s deep conviction subtracts him from the attacks of ridicule

We can set high standards because of the embarrassment we may feel in certain situations.

People are the essence of our nation, those who built it and those who destroyed it.

20. The main elements that make up a satisfied life are two: tranquility and encouragement

Living in peace with oneself is key to being happy, but so is being motivated.

21. No matter if it is not more beautiful or not convenient, the change is made by the change itself

22. To entrust public instruction to the State constitutes a perverse machination tending to mould the human mind in such a way that there is not the slightest difference from one individual to another; the mould used for this purpose is the one most pleasing to the prevailing political regime, whether it be a monarchy, a theocracy, an aristocracy, or the public opinion of the moment; To the extent that such a task is carried out correctly and efficiently, a despotism is installed over the intelligence of men, which later, by natural evolution, subjects the very body of the people to its rule

The state alienates people. What may seem like democracy is often not.

23. Issues such as wealth sharing. It is this question of mere human creation

A phrase that deals with political issues, such as the distribution of wealth.

24. The laws would never be improved if there were not many people whose moral feelings are better than the existing laws

Good people are the ones who drive social change, because otherwise we would be condemned to the ideas of the state.

25. The student who is never asked to do what he cannot, never does what he can

Many times, it is difficult for people to do some things on their own initiative.

26. There is no means of finding out what an individual is capable of doing except by letting him try, and the individual cannot be replaced by another individual in resolving about one’s life, one’s destiny, and one’s happiness

27. The only guarantee against political slavery is the brake that can keep the spread of intelligence, activity and public spirit among the governed

A reflection that aims to provide solutions to political slavery.

28. Genius can only breathe freely in an atmosphere of freedom

When we coerce people, we also put limits on the ability of individuals to be original.

Cooperation is one of the keys to the progress of civilization.

30. Charity almost always sins by excess or by defect: it wastes its treasures in one place and lets people starve in others

Charity is not the solution to the problem, only a patch.