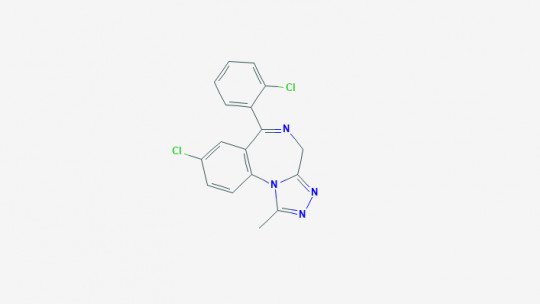 These drugs have sedative, hypnotic and relaxing effects on the nervous system, being like a kind of chemical remedy that gives us artificial tranquility.

However, there is one exception: triazolam . This drug, which belongs to the group already mentioned, due to its chemical peculiarities is used for the treatment of sleep problems, especially acute insomnia.

Let’s see why it’s such a peculiar benzodiazepine and how it differs from the rest.

Triazolam is a medication, belonging to the group of benzodiazepines , that has a depressant effect on the central nervous system. It was patented in 1970 and approved for sale in the United States from 1982, having wide use and support worldwide until the early 90s.

This drug, like the other drugs belonging to the above group, has relaxing, anticonvulsant, hypnotic, sedative and amnesic effects. However, it differs from this group of drugs in that it is usually indicated for sleep problems rather than anxiety disorders.

Triazolam is a very short-acting benzodiazepine anxiolytic. Its way of acting on the organism consists of increasing the activity of GABA, an inhibitory neurotransmitter of the nervous system, facilitating its union with the GABA-érgic receptor.

As more of this substance is found in the synaptic space, a greater sense of calm is generated and sleep is induced.

Triazolam is marketed in tablet form . In healthy adults, quantities between 0.125 and 0.250 mg per day are recommended. In the case of elderly people, debilitated patients or those with some kind of liver problem, the dose should not exceed 0.125 mg.

The drug is taken before bedtime and never with food, as its effect may be reduced. After a short time of having consumed the drug, one begins to feel very sleepy, being asleep for 7 to 8 hours.

Triazolam is consumed for short periods of time, between 7 and 10 days, and the treatment should never be prolonged for more than 2-3 weeks. The reason for this is that, from the week of having initiated the consumption of this benzodiazepine, the organism is developing tolerance, diminishing its main therapeutic effects.

The main use of this benzodiazepine is the short-term treatment of acute insomnia, in addition to circadian cycle disorders such as jet lag . The indication for insomnia is only when the sleep disorder is severe, disabling or causes extreme exhaustion.

Its use is ideal for this type of problem because it acts very quickly and has a short half-life, causing the person who has consumed it to fall asleep in a time of no more than an hour and a half. It should be noted that triazolam induces sleep, but does not maintain it because, having a very short half-life, it is metabolized very quickly.

Another use for triazolam is in medical procedures, where anesthesia is required, thanks to its powerful hypnotic power. It can also be used to reduce anxious symptoms in specific situations, such as short and medium distance air travel, specifically if the person has a particularly bad time on this type of trip.

Among the most common side effects reported by triazolam patients are drowsiness, dizziness, lightheadedness, headaches, skin tingling, coordination problems , nervousness, nausea and vomiting.

If you experience any of the following symptoms, which are considered less common and more serious to your health, you should immediately talk to your prescribing health care professional: rash, hives, swelling of the eyes, face, tongue, or throat, euphoria, rapid heartbeat, tiredness, cramps, depression, itchy visual problems, feeling of throat closing, difficulty breathing and swallowing, and hoarseness.

Although no more common than the symptoms listed above, they can also include: constipation, changes in taste, diarrhea, dry mouth, dreams and nightmares, parasthesia, tinnitus, dysesthesia, weakness and congestion.

Triazolam, although a short-acting benzodiazepine, can cause certain effects the morning after it is taken. The patient may feel as if he or she has a hangover, feeling drowsy, motor uncoordinated and cognitive functions diminished. Confusion and amnesia may also occur, which is especially noticeable since the person may do everyday actions but then not remember what they have been doing at all.

Contraindications and precautions for use

Among the main contraindications are some that are shared with other benzodiazepines, such as chlordiazepoxide:

The reason it is contraindicated for myasthenia and respiratory failure is mainly because of its ability to relax the muscles, making these medical conditions worse.

Special care should be taken in cases where the patient has a history of drug addiction , since prolonged use of triazolam or its administration in high doses may generate physical and psychological dependence.

This drug is mostly eliminated through the kidneys, which is why in case of kidney failure the dose with which this drug is administered should be monitored or, if it is possible to find a better hypnotic option, it should be prescribed.

Interactions with other substances

Triazolam can interact with other substances . It should be noted that this substance is widely metabolized in the liver and eliminated through the kidney.

Drugs that have some kind of liver action, such as oral contraceptives, may increase plasma levels of benzodiazepine, increasing its effect and toxicity.

The combination of alcohol and triazolam has been shown to contribute to the potentiation of the depressant effects of the drug on the central nervous system.

Benzodiazepines have inhibitory effects on levodopa, a drug used for Parkinson’s disease.

The consumption of grapefruit juice is contraindicated if you are under treatment with triazolam, since this fruit increases the plasma levels of the drug when acting on the liver.

With prolonged use, dependency may develop. In addition, abrupt discontinuation of treatment may lead to withdrawal, and anxiety, agitation, aggression, tremor, muscle spasm and insomnia may occur.

If high doses were given during treatment, their sudden abandonment can lead to delusions and convulsions.

For this reason, the interruption of treatment should be done progressively, decreasing the doses in a controlled way during a period between 4 and 8 weeks.

As with other benzodiazepines, the overdose of this substance implies enhanced depressant effects on the central nervous system . As such, they are not usually dangerous, unless they have been combined with alcohol consumption.

Milder symptoms that may occur include drowsiness, confusion, and lethargy.

To treat overdose with triazolam, as with other benzodiazepines such as chlordiazepoxide, flumazenil is used as an antidote.

It has been suggested that the consumption of this drug during pregnancy can produce congenital malformations in the fetus . Also, once the baby is born, it may suffer from tremors and irritability associated with benzodiazepine.

In animal studies with rats, triazolam and its metabolites have been shown to be excreted through milk. This is why it is recommended that you do not breastfeed your baby if you are being treated or that you stop treatment.