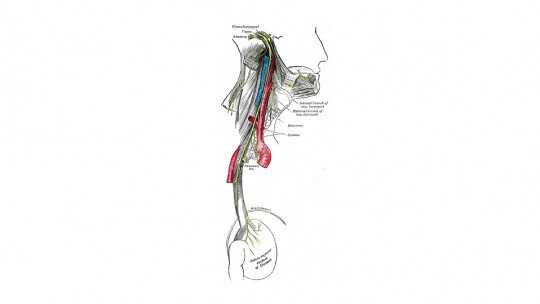 The vagus nerve is the number 10 of the cranial nerves . Among other things it is responsible for transmitting information related to sensory and muscular activity as well as anatomical functions.

Next we will briefly look at what the cranial nerves are, and then define the vagus nerve.

The lower part of our brain is made up of a complex network of nerves that we know as “cranial nerves” or “cranial pairs”. There are 12 of them in total, they originate directly in our brain and they are distributed along different fibers by means of holes that are in the base of the skull towards the neck, the thorax and the abdomen.

Each of these nerves is composed of fibers that serve different functions and arise from a specific part of the brain (either at the base or the stem). Depending on their location and the specific place from which they originate, the cranial pairs are divided into subgroups :

In turn, each of them has different names according to their origin, their activity, or the specific function they perform. In the next few sections we’ll look at how the vagus nerve is defined and what functions it has.

What is the vagus nerve?

The vagus nerve is one of the cranial nerves that is distinguished by having four nuclei and five different types of fiber. Specifically, it is the X cranial pair and is the most predominant neural effector of the parasympathetic nervous system , since it comprises 75% of all its nerve fibres (Czura & Tracey, 2007).

It is known as the “lazy” nerve to refer to ramblings and detours. This is the nerve whose course is the longest of the cranial nerves, extending and distributing widely below the level of the head.

It arises in the medulla oblongata or spinal cord, and advances towards the jugular foramen , passing between the accessory glossopharyngeal and spinal nerves, and is composed of two ganglia: one upper and one lower.

Starting from the spinal bulb and through the jugular foramen, the vagus nerve descends to the chest, passing through various nerves, veins and arteries. Both its left and right sides extend inside the neck to the thorax; this is why it is responsible for carrying part of the parasympathetic fibers to the thoracic viscera.

The vagus nerve interacts especially with the immune system and the central nervous system and performs motor functions in the larynx, diaphragm, stomach, heart . It also has sensory functions in the ears, tongue and visceral organs such as the liver.

Damage to this nerve can lead to dysphagia (problems with swallowing), or incomplete closure of the oropharynx and nasopharynx. On the other hand, pharmacological interventions on the vagus nerve can help to control various pains , for example those caused by cancer and by tumours of the larynx or intrathoracic diseases.

Connection with other nerves

As we saw before, the vagus nerve connects to different nerves, that is, it exchanges several of its fibers and functions. According to Barral, J-P. & Croibier, A. (2009), the nerves it connects with are the following :

Its 5 fibre types and their functions

Nerve fibers, or nerves, are the extensions that connect the center of each nerve cell to the next. They transmit signals that are known as action potentials and allow us to process the stimuli.

The latter are not the only types of fibres, there are also those that connect and activate effector organs, muscle fibres or glands. According to Rea (2014), the vagus nerve has the following fiber types.

Activates and regulates the muscles of the pharynx and larynx .

In charge of transmitting information from a wide variety of organs , such as the heart and lungs, the pharynx and larynx, and the upper part of the gastrointestinal tract.

It is responsible for carrying the parasympathetic fibres from the smooth muscle to the respiratory, heart and gastrointestinal tracts .

This component allows the passage of information from parts of the ear and dura mater into the posterior cranial fossa.