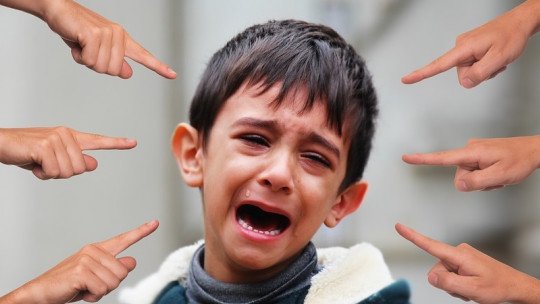 Bullying is a phenomenon that occurs in educational settings and is most common among adolescents. In an analysis of aggressor and victim profiles, Serra-Negra, et al (2015) recognize four main types of bullying: physical, verbal, relational and indirect (including rumor). Other authors, such as McGuinness (2007) add “cyberbullying” as a category that deserves separate review.

In this article we will focus specifically on describing the manifestations, consequences and interventions of verbal bullying , starting with a definition of bullying and its main characteristics.

Beyond the victim and the perpetrator

The term “bullying” is the neologism that refers to bullying. Its meaning translated into Spanish is “intimidación personal” and comes from the English “bully”, which means “to overwhelm with threats”. Also, “bully” can refer to a person who is cruel or intentionally aggressive towards others.

While is a present and recurrent phenomenon in the educational context , bullying has been especially studied since the 1970s, initially in the Nordic countries after cases of adolescent suicide related to school bullying were reported.

The most classic definition of bullying in this context includes the repetition of aggressive and intentional actions performed by one or more students towards a member of the group ; to which is added a systematic abuse of power involving the repetition of harm and a series of inequitable relationships between members (McGuinness, 2007).

However, bullying has typically been defined and analyzed around the relationship and psychological profiles of the victim and the perpetrator, as if the violent behavior had its root and functioning only in these two individuals. Although the above has been very relevant, there are also other elements that activate and re-produce bullying in adolescent relationships.

Causes of bullying and its social components

Salmivalli, Lagerspetz, Björkqvist, et al (1995) tell us that, in its nature, bullying is a social phenomenon, as it takes place within groups that are relatively permanent. One of its main characteristics is that the victim has little chance of avoiding the perpetrators , not only because the phenomenon often remains invisible, but also because the attacks are generally supported by the other members of the group.

Therefore, bullying is also a category of aggressive behavior where there is an ambivalence of power that allows such an act to be repeated in groups and periodically. It is not only a violent relationship that is established from an aggressor towards a victim, but it is a type of violence that occurs in the group context, where, through determined roles, some members can reinforce the violent behaviour of other members .

For the same reason, it is possible to distinguish between a relationship where there is bullying and one where there is simply conflict, by assessing whether or not the power relations between those involved are equitable. In other words, it is not bullying when the conflict occurs between two people who are in the same positions of power.

What is verbal bullying and how does it manifest itself?

According to McGuiness (2007), research has shown that verbal bullying is the most common method of school bullying. It occurs at similar rates among boys and girls, and the insults are mainly characterized by racial and gender components. Likewise, the most common methods of verbal bullying are slander , that is, false and malicious statements, mocking and calling the person with derogatory or violent nicknames.

Serra-Negra, Martins, Baccin, et al (2015) tell us that the main trigger of verbal bullying is the dynamics of acceptance of some group members by other members, which is influenced by factors such as physical characteristics and socioeconomic status of all of them.

In other words, in addition to the channel through which the violence is exercised (verbal, physical, etc.), the various types of intimidation can take on multiple focuses. For example, offensive behavior may target gender, race, disability or social class , among other categories.

When these characteristics do not correspond to the expectations of the group, the individual is rejected and harassed. Thus, the same authors tell us that verbal bullying is mainly motivated by the following issues:

Thus, the detection of verbal bullying begins with giving relevance to any statement whose content is centered on the above issues. This can be detected both at school and at home. In fact, despite the fact that bullying occurs by definition at school, it is in the comments made within the family where it often becomes more evident . Once this has been detected, it can be put into relation with individual and emotional manifestations such as those we will see below.

Emotional consequences of these attacks

According to Elipe, Ortega, Hunter, et al (2012), bullying can generate significant emotional imbalances, which if maintained in the medium and long term, can have very negative and differential consequences for the victim and for the aggressors. In this sense, emotional expression and regulation is one of the possible predictors of the situation of bullying.

Likewise, other consequences of bullying on the person who is a victim, and which are in turn indicators of victimization, are as follows:

Considering bullying as a phenomenon that is not only psychological but also social is important because it allows us to analyze dynamics and components that sometimes go unnoticed, and that nevertheless lay the foundations in which violent interaction is generated and reproduced .

Taking this into consideration is an essential element in planning intervention and prevention strategies for bullying, both at the family level and in the educational environment.

While the latter, the family environment and the educational environment , are the two main support systems of adolescents, any alteration in both can significantly affect the course of their development (in the negative and in the positive). We will look at some broad strategies that can be carried out in both contexts.

1. In the educational environment

Different studies speak of a lesser psychosocial adjustment and a scarce level of empathy in the members of the group that attack others (Elipe, Ortega, Hunter, et al, 2012). In this sense, it is important that the educational environment reinforces empathy, and for this, it is necessary to know and work on the schemes of recognition that exist between the different members. From there, it is necessary to facilitate environments of coexistence free of stereotypes and harassment .

2. In the family environment

Prevention and intervention strategies in the family environment depend largely on the dynamics generated by adults.

In this sense, it is important to start with a detection of the indicators of bullying that are present at a verbal level , and then explore what are the background patterns that are causing the adolescent to have a derogatory perception about the characteristics of the partner he is attacking. Intervening by modifying these patterns is important to counteract the tendency to aggression.

Likewise, both in the family and at school, it is important to have detailed and reliable information on the subject, which makes it possible to carry out educational strategies based on empathy and respectful recognition of others.

It is also important to work with the coping styles of victims of bullying. To do this, it is essential to start by recognizing the situation of bullying and knowing that you are a victim of it. However, what follows is to reinforce the recognition of oneself as a person who can also generate resources to counteract the violent relationship .

This recognition starts from the way in which the person feels treated by the adults and their contexts of reference, as well as by their peers. The interaction that the victim establishes with his/her closest surroundings can reinforce the situation of vulnerability, far from counteracting it, so this is an element that should also be analysed.