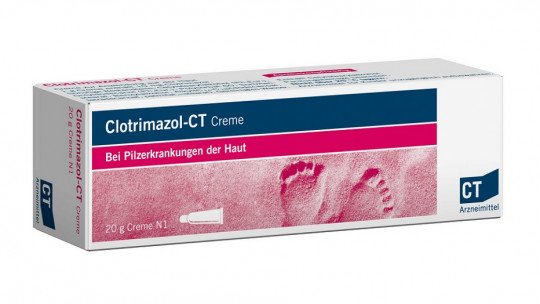 Among the most commonly used medicines to treat infections is clotrimazole, better known as “Canesten” . Clotrimazole is very popular in the management of infections such as candidiasis and ringworm.

In this article we will discuss the characteristics and uses of clotrimazole , as well as the precautions to take if you plan to take this medication. In any case, it should always be remembered that this product should only be used if indicated by a doctor who has personally examined what is happening in the body.

Clotrimazole is a medicine with an anti-fungal action, that is, it causes the death of the fungi that are developing in some tissues of the body. It is therefore used to treat infections caused by these organisms.

It is usually marketed as Canesten, although it can also be found as Fungidermo, Clotrimazole Canesmed, Clotrimin or Canespie, among other names. There are also Clotrasone and Lotriderm, medications that combine the antifungal action of clotrimazole with the anti-inflammatory effects of betamethasone.

Clotrimazole kills fungi by binding to their cell walls and preventing them from synthesizing ergosterol , a cholesterol-like compound that fungi need to maintain their cell membranes.

In any case, as we shall see, the possible side effects make clotrimazole a product whose use is risky, so its consumption must be indicated and supervised by a specialist.

Clotrimazole drugs are used to treat fungal infections of various types. Depending on the location of the infection we will use one or other of the available formats.

Probably the best known application of Canesten is the treatment of candidiasis or yeast infections , especially those that occur in the vagina. Studies say that three out of four women will suffer from vaginal candidiasis during their lifetime, and almost half will have more than one episode. It also treats candidiasis, a similar infection that affects the glans of men. Thus, these are characteristic conditions of sensitive or mucous-bearing tissues.

Clotrimazole throat lozenges are also used to prevent oral candidiasis in people with neutropenia, a disease characterized by low blood concentrations of neutrophils, the most common type of white blood cells, needed for defense against infection.

Canesten is also the treatment of choice for dermatophytosis or ringworm , a group of fungal skin infections. The types of dermatophytosis for which this medicine is used include athlete’s foot and tinea corporis, inguinalis, and cruris.

Another application of clotrimazole is the management of sickle cell disease. In this blood disease, red blood cells become stiff and take on the shape of a sickle or crescent, increasing the risk of infection and heart attack and greatly shortening life expectancy.

Clotrimazole is marketed in several formats. Some of the best known are as a cream, as an egg, as ear drops and as a lozenge for the throat. Each of these variants of clotrimazole is used to treat certain infections, and many of them have their own brand name, although “Canesten” is shared by several medications.

If applied topically to treat skin infections, Canesten is used once in the morning and once at night for a period of two weeks to two months. The throat lozenges are taken five times a day for two weeks.

In case of vaginal infection clotrimazole is applied only once a day. The 100 mg dose is given for six days, while 500 mg is sufficient for a single use. It is recommended to use it before sleeping, since the best way to ensure that the medicine takes effect is to lie down with your legs bent for a while.

As there are many drugs with clotrimazole and each has its own particularities in terms of administration, the package insert should be consulted carefully. It is also highly recommended to ask for medical opinion, especially if it is the first time that clotrimazole is used.

Side effects and contraindications

Some of the side effects of clotrimazole vary depending on the application format we use; however, many of these reactions are related to dermatological symptoms such as inflammation, redness, irritation, itching, burning , scaling, rash or blisters on the skin.

Sometimes can also cause pain in the part of the body where it is applied. If it does occur, this pain seems to be especially severe in cases of ear infection.

Canesten does not appear to carry risks if used during pregnancy, although it is recommended that it be applied directly with the finger in case of vaginal infections that occur during the last weeks of pregnancy to minimize the likelihood of it affecting the baby. Clotrimazole should preferably be avoided during breastfeeding.

It is especially important to consult your doctor before using Canesten if you have diabetes, liver problems or immune diseases such as HIV, as well as if you are using other medication, especially antibiotics. It is not recommended to combine clotrimazole with alcohol.