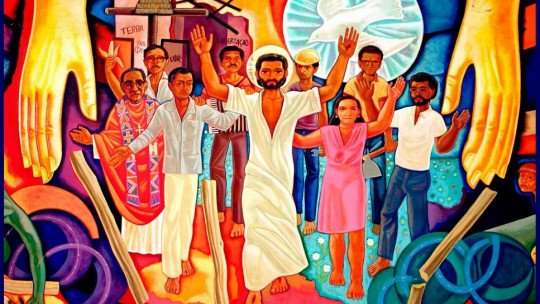 Liberation Theology emerged in the 1960s as an ethical option for people in poverty in Latin America. It broadly interprets the teachings of the Bible with the intention of supporting the demands of the sectors most unprotected by political and economic institutions.

Its development was one of the antecedents for the emergence of several social movements and even theoretical models that reformulated not only the Church, but some of the most important practices mainly of Latin American communities.

From European Theology to Liberation Theology

Theology, which comes from the Latin theos (God) and logos (reasoning), is the philosophical reflection and study on the knowledge, attributes and facts related to God .

It is a very complex field of study with many centuries of history, whose development has had different nuances according to the place from which it has departed. Therefore, offering a definition of the Liberation Theory implies approaching its history and context.

The most remote origins of theology in the Latin American region are to be found in the Spanish conquest, at which time a model of social order based on a Christianity that was quite unaware of the injustices caused by colonization and slavery had been established.

In this context, there were priests who were attentive and sensitive to the clergy’s own complicity in the reproduction of social inequalities , as well as to the little access that the poorest people had to the Church itself. They laid the first foundations for questioning the practices of the church and of a colonial Catholicism, which later and in the European context continued to develop.

At the beginning of the 20th century, a good part of Latin American Catholicism began to recognize several of the social problems that the region was going through, so a sector of the Church began to create alliances with social movements and struggles in favor of the most unprotected.

In the 1960s, and in the face of the political and economic crises that became more acute in Latin America, as well as the transformations of the Catholic Church in those areas, society and an important sector of Catholicism became intertwined.

Thus, in the following decade, this sector positioned itself as one of the main promoters for the transformation of different social problems that were generating a lot of poverty. They began to question the premise that God and the Church can reach everywhere, regardless of the social situation and economic condition.

Among other things, they questioned the concentration of Catholicism in large cities, as well as various practices of the church that resemble its representatives, with political and economic representatives dividing societies between the poor and the rich. Again, there were those who realized that the Church was participating as an ally of social inequalities .

The rise of Liberation Theology

Especially in Brazil, a good part of the Church began to question in an important way the social conditions, even the political class itself began to call social injustice “the great sin”.

From this, local strategies for the development of the countryside began to be generated, which were useful at least in the beginning, and which above all influenced the radicalization of the middle class, which was beginning to support the working class in an important way. In this context appears, for example, Paulo Freire’s adult literacy movement and his pedagogy of the oppressed.

Some time later, and with different nuances, the Theology of Liberation extends to Cuba, then Venezuela, Guatemala, Peru and other countries of the region , so that even the U.S. government in turn launched an “Alliance for Progress”, which promised aid for social development (although it also deployed police forces to contain the guerrillas). With this, part of the Church was united with the Democratic parties in the implementation of social aid.

In short, social revolutions were beginning to have to do with theological reflections, which further exacerbated the crisis of the traditional Church. An important sector of the Church was not so much in politics, but rather in direct social action, in community projects for development. This was Liberation Theology.

From social action to political action and other limits

Liberation theology has also encountered some limits, precisely in recognizing that poverty is a structural problem that requires political action from the very beginning.

From there, Liberation Theology had to be directly linked to political, and later economic, commitments. For example, different social-theological movements emerged .
Thus, when the document Vatican Council II was proclaimed, an initiative of reform of the Church that marked the 20th century, where among other things a more active role was given to the faithful and a more modest one to the Church, Latin American theologians strengthened their critical view and focused it on the problems of the region.

That is to say, the subject of theology was no longer the individual, but the critical articulation of the theologian with the believing community, especially the communities in poverty.

This is also why it is known as Latin American Liberation Theology, because by focusing on Latin America’s own problems a significant break with the European matrix had been established. There were even those who called themselves “Third World Bishops” or “Movements of Priests for the Third World”. They were the ones who used the word “liberation”.

The priests were to have a commitment to the transformation of society, against global structural and institutional violence. Poverty is beginning to be understood as a question that has to do with God, and its solution as well.

Its subsequent development extended in different branches and towards reflections in contexts outside Latin America. More recently it has been developed in articulation with feminism, Marxist theory and also around the question of the constant victimization of people in vulnerable situations, that is to say, about the need to recognize people in a situation of poverty as agents , and not only victims, in social structures.