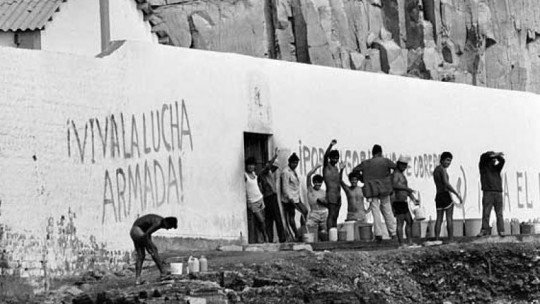 Sendero Luminoso is a Peruvian political organization that has been at the forefront of one of the most important and conflictive armed movements in recent decades in Latin America. The consequences of violent public actions, and the state of war unleashed, continue to be analyzed to this day as a crucial part in the history of the development of the political systems of the region.

We will now briefly explain what Sendero Luminoso is, what some of its background and key people are , as well as some of the consequences it has had in the cities most involved.

What is Sendero Luminoso?

Sendero Luminoso, also known as the Communist Party of Peru-Shining Path (PCP-SL), is an insurrectionary armed movement that has been active since the 1970s in Peru . It is considered a terrorist organization by several states.

It started as an armed movement for free education, initiated in the Peruvian province of Ayacucho, and later spread as a political movement, which developed in other cities of the same country and culminated in a war that lasted more than a decade.

The uprising in arms occurred in the 1980s and unleashed a series of actions and confrontations that are considered some of the bloodiest in recent Latin American history.

Abimael Guzmán and the beginnings of the PCP-SL

The most representative figure of the movement is Abimael Guzmán , who was a professor at the National University of San Cristóbal de Huamanga, located in the province of Ayacucho.
When analyzing the indigenous situation in Peru before the political powers, Guzmán applied his interpretation of Marxism, Leninism and Maoism , as well as his perspective on the international debates about communism in the Soviet Union and China, among other things.

In the electoral and political context of the 1960s, Shining Path was not only promoted by the rural sector and the peasantry in its different expressions; many young university intellectuals also participated in a significant way. In the beginning, the organizational bases of the movement were laid through the Communist Party of Peru and the Red Faction.

Sendero Luminoso formally emerged after a meeting that took place at the University of Huamanga , in Ayacucho and was constituted from the beginning as a political organization with a Marxist-Leninist-Maoist perspective.

In addition to this, some scholars of the movement have analyzed intellectual influences from the beginnings of the SL in relation to the theories of Alain Touraine, Antonio Gramsci, José Arico, Sinesio López, José Nun, James Scott, among others. One thing these authors have in common is the demand for agency (the power of the actors themselves) in social transformation and in historical models and structures. (Coronel, 1996).

Some background and development of this organization

Degregori (2016) distinguishes between three fundamental antecedents of Shining Path’s armed struggles. On the one hand, the birth of Sendero Luminoso as an independent organization between 1969 and 1970. On the other hand, the decision to take up arms that occurred between 1976 and 1978. And finally, the national context and the transformations that had been produced by the reformist military government, from 1970 until the crisis of the following decade.

In this critical situation, the indigenous Andean region had been unprotected and violated by the military dictatorship of the revolutionary government of the armed force, which lasted from 1968 to 1980.

At the end of this dictatorship, in 1980, Shining Path carried out the first public act of violence: a fire of anaphoras and ballot boxes as a way of protesting against the supposed normalization towards democracy. This occurred in the province of Ayacucho, specifically in the municipality of Chuschi, and from then on, the movement continued to carry out public acts of violence for the next 10 years. During this time, the movement became militarized (between 1983 and 1986), which culminated in the deployment of violence throughout the territory for the next three years.

Finally, an important transformation occurred in the 1990s, with the arrival to power of Alberto Fujimori . In 1992, Abimael Guzmán was arrested and the movement laid down its arms and the actions of the SL were drastically modified, which is currently known as post-Trialism.

The moment in which the uprising in arms occurred was crucial for the history of the country, since the first months of the government of the armed forces were beginning, the oil had been nationalized, and the discussion on the reforms for the rural sector, among other things, was approaching. In this context, the movement for free education promoted by Sendero Luminoso gave an idea of the regional crises the countryside was going through.

As expected, the armed confrontation has had many unpleasant consequences in the Andean area of Peru. According to Degregori (1996), in addition to the destruction of infrastructure and widespread poverty in the region of Ayacucho, there were significant changes in the countryside in the rural areas of Huanta, La Mar and Cangallo, which are three of the provinces most affected by the violence.

Many people were forced to leave their communities to avoid the disastrous consequences of the fighting. Those who remained had to radically rearrange their lifestyles.

For example, one of the practices that were generated in order to maintain the population in the affected areas was the construction of fortified villages on hills or hills . Those who did not climb the hills had to strengthen their houses with structures that resemble walls.