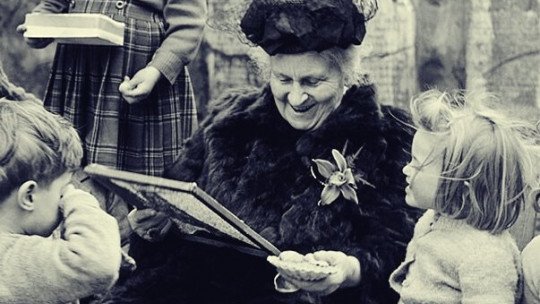 Maria Montessori is known for having created the pedagogical model we know as “Montessori Method” . However, her biography is much more extensive. She was also one of the first women to obtain a medical degree in Italy and was involved as an activist for the rights of women and children.

Maria Montessori also specialized in areas such as biology, philosophy and psychology, which allowed her to create knowledge and interventions on child development that are still valid today.

Maria Montessori: biography of this doctor and activist

Maria Montessori was born in Chiaravalle, province of Ancona, in Italy, on August 31, 1870. She was the only daughter of a military father, a descendant of the Bologna nobility who had fought for the independence of Italy, and of a liberal, Catholic and intellectual mother whose family was involved in the world of philosophy, science and research.

No wonder the rest of her biography unfolded as it did: at the age of 12, Maria Montessori and her family moved to the city of Rome, with the intention of ensuring that she would study in the best schools of the time.

While there, she showed a special interest and skill in mathematics, so despite her father’s wishes for her to become a teacher, Maria Montessori enrolled in a technical engineering school attended only by men.

A year later, he became anxious to study medicine, so he decided to abandon engineering and begin new studies at the age of 22, even in the face of the initial refusal and rejection of the director, his father and his classmates, who considered that medical school was a specialty that only men could practice.

Finally, in 1896, at the age of 26, Maria Montessori became one of the first female doctors in Italy , the same year in which she was elected as the representative of Italian women at the Feminist Congress held in Berlin, where she defended the equal rights of women.

At the same time, he denounced the situation of children working in mines in Sicily, thus joining the fight against child labour exploitation. Some time later, motivated by an awareness of social justice, she began to work in psychiatric clinics and schools where children with intellectual disabilities mainly attended in very precarious conditions. At the same time, Maria Montessori had continued to study biology, philosophy and psychology, both in Italy and in France and England.

These are the experiences that finally allowed him to develop the pedagogical method that bears his name.

From medicine to pedagogy: the beginnings of the Montessori method

At the time Maria Montessori lived, medicine was strongly interested in finding treatments and even a “cure” for some conditions such as deafness, paralysis, intellectual disability, etc. But, what Maria Montessori observed while working with children with such conditions, was that what they really needed was not medicine, but pedagogy.

Maria Montessori made many observations at the Psychiatric Clinic of the University of Rome, which led her to realize that the real problem with many children with disabilities playing in ways that seemed socially inappropriate was that they were bored, because they had no teaching materials, and that the space they were in was very messy and their conditions were quite precarious.

From there, Maria Montessori had the idea of building an environment that was pleasant. She was convinced that the conditions of space and materials were crucial to the development of the children’s intellectual and social skills. At that very moment she learned that there were two French doctors who had developed a similar educational method, so she travelled to Paris to meet them.

Upon her return, the Italian state had opened an institute aimed at promoting the intellectual abilities of people with disabilities (Escuela de Ortofrenia), where Maria Montessori obtained the position of director and continued as a teacher trainer , as well as university professor and lecturer in different cities.

What was the first Montessori school?

Finally Maria Montessori had the opportunity to create her own educational centre. In January 1907 she opened the first Casa dei Bambini (Children’s House – the name by which the Montessori classroom, or environment, is known to this day, for children from 3 to 6 years old).

He paid special attention to how the environment would be prepared, had furniture made to the size of children (which at the time was quite innovative). He also designed teaching materials appropriate to the ages and sensitive periods of the children and hired a teacher as an assistant. Together they started working with about 50 children.

Maria Montessori continued to constantly observe the evolution of the children, which allowed her to continue developing her educational method . In the same way, she was able to continue designing activities and didactic materials, but above all she was able to lay the foundations for the theoretical and empirical principles that define the method to this day.

Maria Montessori had finally become a teacher (just as her father had wanted), but her biography shows us that she was also a woman who revolutionized traditional forms of teaching-learning: she was committed to respecting children, and thus managed to recognize what they needed to learn more easily.

His method was at first recognized as a “scientific pedagogy” that finally had repercussions in the homes , because it was notorious that children easily transferred their knowledge and habits to their homes and also made public spaces. It had inaugurated a way of enhancing children’s development that had implications far beyond formal education and the schools themselves.