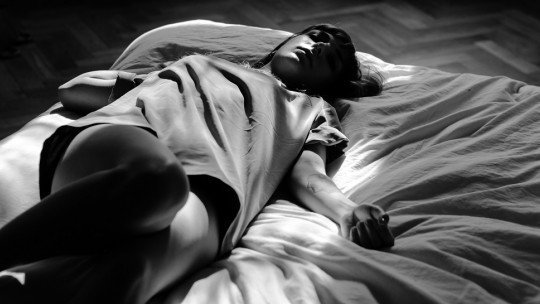 Many cyclical changes take place during the menstrual cycle, both in hormones and in body temperature and metabolic activity. Because of these changes and their effects on circadian rhythms, the menstrual cycle is considered to affect sleep significantly.

According to some studies, these sleep disturbances may be due to different factors associated with physiological changes in the menstrual cycle. In this article we will review some of these factors, as well as the general functioning of both sleep and menstruation , so that we can better understand their relationship.

Our whole organism works in cycles. We have, for example, circadian cycles, which are the ones that last about 24 hours. That is why they are called “circa”, which means “around”; and “diano”, which means “day”.

Part of what regulates the circadian cycles are wakefulness and sleep . This regulation occurs through two biological rhythms that we call internal synchronizers (such as hormonal rhythms, blood pressure, body temperature, in the metabolic system); and external synchronizers, such as light and dark, noise, events that cause stress, among others.

When the time of rest and sleep approaches, these synchronizers adapt to our need for rest, that is, they prepare the organism for the decrease of energy that we require when we sleep deeply. Thus, our physiology produces a whole series of functions during wakefulness, and others during sleep, in coordination with external stimuli.

On the other hand we have infradian cycles, which are the ones that last more than 24 hours. These cycles are those that regulate physiological events that occur less than once a day, such as the menstrual cycle , which occurs every 28 days.

How does the menstrual cycle work?

During the menstrual cycle, the interaction of hormones from the hypothalamus, pituitary and also the ovaries takes place . This system is known as the hypothalamic-pituitary-ovarian system (HHO) and is activated by the secretion of different hormones, such as gonadotropins (GnRH), luteinizing hormone (LH) and follicle-stimulating hormone (FSH).

From this secretion, the menstrual cycle is divided into two phases: the follicular phase (where FSH is secreted to start releasing the eggs and the necessary hormones); and the luteal phase (which is when the hormonal secretion decreases around day 23 of the cycle, causing vascular transformations in the endometrium and finally its release, i.e. menstruation).

It is precisely the luteal phase that has been related to the emergence of a set of somatic and physical changes typical of the menstrual cycle, among which are the alterations of the sleep cycle .

In the latter, brain activity occurs at a higher rate , which requires a number of important hormonal changes. For example, growth hormone, prolactin (which stimulates breast milk production), testosterone, melatonin (which helps regulate the light-dark related circadian rhythm), and some other hormones that play an important role in menstruation are secreted.

For example, a decrease in melatonin secretion has been associated with different premenstrual stresses , which significantly changes the circadian cycles related to light and darkness.

As we have seen, one of the internal factors involved in the regulation of sleep cycles, is endocrine activity (that of the system in charge of releasing hormones within our body).

When the activity of this system is intensified, for example, during the luteal phase of the menstrual cycle, our sleep can also be modified. In addition, the hormones GnRH, LH and FSH, have a significant peak release in the non-REM sleep phase, which means that their concentration levels increase according to specific periods of the sleep cycle.

The latter has been especially associated with women who have premenstrual syndrome accompanied by affective symptoms , and also in women who have a psychiatric diagnosis related to mood.