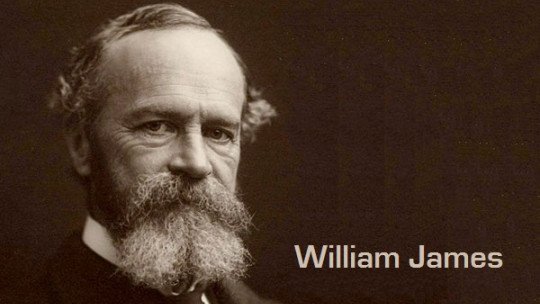 Psychology has given birth to a great number of theories and theoretical models through which it seeks to explain human behavior.

These are concrete proposals that in most cases only seek to explain a small part of the set of themes that can be explained by psychology, since they are based on the work that has been carried out by a multitude of researchers months, years and decades ago. However, this whole network of proposals had to start at some point where practically nothing was known about how we behave and perceive things.

To answer these questions it is convenient to look back and review the life and work of William James , a philosopher and psychologist who set out to investigate one of the most basic and universal concepts regarding the study of the mind: consciousness .

Who was William James?

William James’ life began like that of any representative of the American upper classes. He was born in 1842 in New York, in the bosom of a well-to-do family, and the fact that he had the considerable economic resources of his parents allowed him to be educated in good schools, both in the United States and in Europe, and to be imbued with the different philosophical and artistic tendencies and currents that characterized each place he visited. His father, moreover, was a famous and well-connected theologian, and the bourgeois culture that surrounded the whole family probably helped William James to be ambitious in setting himself vital goals.

In the end, William James had everything to become a well-positioned person: the material resources and also the influences of the New York elites related to his relatives accompanied him in this. However, although in 1864 he began to study medicine at Harvard, a series of academic parentheses and health complications meant that he did not finish his studies until 1869 and, in any case, he never went on to practice medicine .

There was another area of study that attracted his attention: the binomial formed between Philosophy and Psychology, two disciplines that in the nineteenth century had not yet been completely separated and that at that time were studying matters related to the soul and thought.

The William James Psychologist is born

In 1873, William James returned to Harvard to teach Psychology and Philosophy . Certain things had changed since he graduated from medical school. He had subjected his life experience to a philosophical examination, and he had become so dedicated to it that he felt strong enough to become a professor even though he had not received any formal education in the subject.

However, despite not having attended philosophy classes, the subjects he was interested in were of the kind that had marked the beginnings of the history of the great thinkers. As he could not base his studies on previous research in psychology because this had not yet been consolidated, he focused on studying consciousness and emotional states . That is, two universal themes that are intimately linked to philosophy and epistemology as they are present in all our forms of interaction with the environment.

Consciousness, according to James

When it came to the study of consciousness, William James encountered many difficulties. It could not be otherwise, since, as he himself recognized, it is very complicated to even define what consciousness is or to be aware of something . And, if one does not know how to delimit the object of study, it is practically impossible to direct research on it and make it come to fruition. That is why James’ first great challenge was to explain what consciousness is in philosophical terms so as to be able to test its mechanisms of functioning and its verifiable foundations.

He managed to approach an intuitive (though not entirely exhaustive) idea of what consciousness is by drawing an analogy between it and a river. It is a metaphor to describe consciousness as if it were an incessant flow of thoughts, ideas and mental images . Once again, at this point we can see the intimate connection between William James’ approach to psychology and philosophical issues, since the figure of the river had already been used many millennia before by Heraclitus, one of the first great thinkers of the West.

The precedent of Heraclitus

Heraclitus was faced with the task of defining the relationship between “being” and change that seem to be part of reality. All things seem to remain and show qualities that make them stable in time, but at the same time all things change . Heraclitus maintained that “being” is an illusion and that the only thing that defines reality is constant change, just like a river that, although apparently it is only one thing that remains, it is still a succession of parts of water that never repeat itself.

William James thought it useful to define consciousness as if it were a river because it established a dialectic between a stable element (consciousness itself, what you want to define) and another that is constantly changing (the content of this consciousness). He thus emphasized the fact that consciousness is composed of unique and unrepeatable units of experience, linked to the here and now , and which lead from one “stretch” of the flow of thoughts to another part of it.

The nature of consciousness

This implied recognizing that in consciousness there is little or nothing that is notional, that is, that can be isolated and stored for study, since everything that passes through it is linked to the context . The only thing that remains in this “stream” is the labels we want to put on it to define it, that is, our considerations about it, but not the thing itself. From this reflection William James reaches a clear conclusion: the conscience is not an object, but a process, in the same way that the operation of a motor is not in itself something that exists separated from the machine .

Why does consciousness exist, then, if it cannot even be located in a given time and space? For our body to function, he said. To allow us to use images and thoughts to survive.

Defining the train of thought

William James believed that in the flow of images and ideas that constitute consciousness there are transitive parts and substantive parts . The first ones constantly refer to other elements of the flow of thoughts, while the second ones are those in which we can stop for a while and notice a sensation of permanence. Of course, all these parts of consciousness are transitory to a greater or lesser extent. And, what is more important, they are all private, in the sense that the rest of us can only know them indirectly, through our own awareness of what we are living .

The practical consequences of this for research in psychology were clear. This idea meant admitting that experimental psychology was incapable of fully understanding, only through its methods, how human thought works, even though it can help. To examine the flow of thought, says William James, one must begin by studying the “I”, which appears from the very stream of consciousness .

This means that, from this point of view, studying the human psyche is equivalent to studying a construct as abstract as the “I”. This idea did not please the experimental psychologists, who preferred to focus their efforts on studying verifiable facts in a laboratory.

The James-Lange Theory: Do we cry because we are sad or are we sad because we cry?

Having made these basic considerations about what consciousness is and is not, William James was able to begin to propose concrete mechanisms by which our flows of thought guide our behavior. One of these contributions is the Theory of James – Lange, devised by him and Carl Lange almost at the same time, according to which emotions appear from the awareness of one’s own physiological states.

This is a theory that goes against the conventional way in which we conceive the functioning of our nervous system and our thoughts, and the same thing happened at the end of the 19th century. Today, however, we know that most probably William James and Carl Lange are only partly right , since we consider that the cycle between perception (seeing something that scares us) and action (running) is so fast and with so many neuronal interactions in one direction or another that we can not talk about a causal chain in just one sense. We run because we are scared, and we are also scared because we run.

What do we owe William James?

William James’ beliefs may seem bizarre today, but the truth is that a large part of his ideas have been the principles on which interesting proposals have been built that are still valid today. In his book The Principles of Psychology , for example there are many ideas and notions that are useful for understanding the functioning of the human brain, despite having been written at a time when the existence of the synaptic spaces that separate some neurons from others was just being discovered.

Furthermore, the pragmatic approach he gave to Psychology is the philosophical foundation of many psychological theories and therapies that put more emphasis on the usefulness of thoughts and affective states than on their correspondence with an objective reality.

Perhaps because of this union between Psychology and the philosophical current of American pragmatism (which later would also define the behaviourist B. F. Skinner) and because of the fact that he was one of the pioneers in American lands, William James is considered to be the father of Psychology in the United States and, very much to his regret, the one in charge of introducing in his continent the Experimental Psychology that in Europe was being developed by Wilhelm Wundt.

In short, although William James had to face the costly mission of helping to establish the beginnings of Psychology as an academic and practical field, it cannot be said that this task has been unappreciated. He showed real interest in what he was researching and was able to use this discipline to unfold exceptionally acute proposals about the human mind. So much so that, for those who came after him, there was no choice but to take them for granted or strive to refute them.