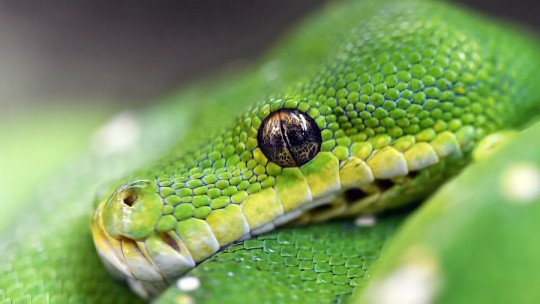 Dreaming about snakes is a relatively frequent experience and usually produces feelings of anguish and discomfort in those who live it.

In addition to the anxiety that these animals tend to produce in most people, there is a disturbing component of symbolism. That is why many people ask themselves… what does it mean to dream about snakes? Can Sigmund Freud’s theory of dream interpretation tell us anything about this? Let’s see it.

The interpretation of dreams and the subconscious

The mysterious nature of dreams is something that has always aroused the interest of humanity, even long before the emergence of psychology as a science. Closing our eyes, disconnecting from the world around us and passing without realizing the dream world is an experience difficult to understand. Among other things, because while we dream, almost anything is possible ; even situations that in the real world could only be attributed to magic or the supernatural.

However, although the realm of dreams offers a potentially unlimited repertoire of situations, in practice most of these visions, stories or sensations refer to the real and objective world in which we are sleeping in a bed, an armchair or a hammock. And that is why even the most surreal situations with non-human beings are usually composed of animals that actually exist; snakes are one example of this.

Now… what does it mean to dream about snakes, creatures that appear relatively often in both dreams and nightmares? Is there an interpretation for this dream experience?

The idea that dreams and nightmares have a meaning is linked above all to the theories of psychoanalysis proposed by Sigmund Freud. According to this neurologist, one of the most influential authors of the 20th century, dreams are forms of expression by which contents of the unconscious part of the human mind emerge to consciousness disguised as something they are not.

That is, in dreams we would find emotional and repressed contents that can only be allowed to appear under the appearance of dreamlike elements whose true meaning is not literal, but must be interpreted just as we would interpret any symbol.

What does it mean to dream about snakes?

Knowing what we have seen up to now, it is understandable that it is common to ask the question of what it means to dream about snakes, with all their variants: the meaning of dreaming about snakes that attack, that stare at us, that talk to us, that ignore us, etc.

From the orthodox psychoanalytic perspective, these reptiles would be symbolic elements to be deciphered, that is, symbols that express messages that the body sends to the conscious part with which the subconscious is indirectly related when we dream, a moment in which the mechanisms that normally repress contents far from our consciousness lose power and become more relaxed.

And since Freud’s ideas have been very influential for decades, even among those who have never read the father of psychoanalysis, the idea that in the experience of dreaming about snakes there is a meaning, a hidden meaning that reveals aspects of our personality or of the nature of our traumas, memories , etc.

However, we should discard the idea that dreaming about snakes has a fixed and very concrete meaning, although it can have a more diffuse and abstract one. Let’s see why.

The limitations of Freud’s work

Freud is highly criticized for reaching contradictory conclusions: on the one hand, he claims to know general principles of the functioning of the human mind, and at the same time, he establishes that all this is determined by the autobiographical history of each person, especially during his childhood years. That is, that his ideas apply and at the same time do not apply to all human beings .

Therefore, even for Freud to dream about snakes would not have a predetermined meaning, but to understand this symbolism would be necessary to explore the particular case of each person, since one of the characteristics of the symbols is that depending on the context we can give them literally any meaning.

However, this defect in Freudian psychoanalysis does not imply that we cannot attribute a meaning to dreaming about snakes; it only implies that we cannot link it to a very concrete and elaborated message , one that reveals something fascinating about who we are and what our past is, as we will see now.

If there is a key to understanding what it means to dream about snakes, that is the way in which evolution has predisposed us to fear these animals .

The fact is that the fear of snakes is not something purely learned; biological evolution has made our brain especially skilful in detecting these animals, detecting very quickly forms similar to those of snakes and causing in us an almost automatic emotional impact .

It is true that it is possible to enjoy the company of these reptiles, but this is usually the product of a learning process by which we “train” ourselves in the task of tolerating their company; the first option we contemplate when we see these creatures near us is to move away quickly.

Thus, the snakes that appear in our dreams are a way by which anxiety is shaped while we sleep. While resting we tend to relax more than we are awake, if there is something in our lives that worries us, that anxiety can “leak” into our dreams , and easily produce nightmares or experiences like being visited by one of these elongated reptiles.