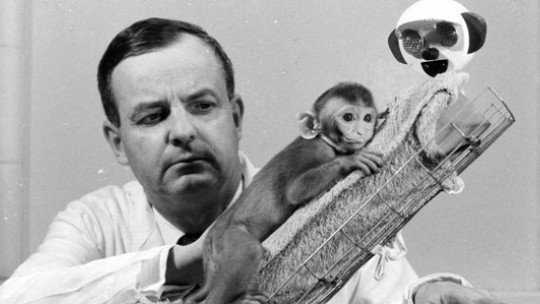 When talking about psychology, many people may think of
personality traits, mental disorders or cognitive biases.In short, elements that we can relate to a single person: each one has its level of intelligence, the presence or absence of a diagnosed disorder, or a propensity to fall into certain delusions of the mind.However, there is a subject that is also very much addressed by psychology: the way in which interpersonal relationships change us.

The prevailing paradigms in psychology in the first half of the 20th century were psychodynamics born with Sigmund Freud and behaviorism defended by B. F. Skinner, held the idea that the basis of affection between mothers and their young children is food and, more specifically, breastfeeding. In their own way, each of these two psychological currents, so different from each other in most of their approaches, proposed the same idea: that babies and mothers began to engage in affective behaviors thanks to the need of the former to be fed. Right after birth, the main role of mothers was to provide food for their offspring.

However, psychologists John Bowlby and later Harry Harlow dealt a severe blow to this theory. It is thanks to them that today we know that affection in its purest and most literal sense is a fundamental need of children. In particular, Harry Harlow’s monkey experiment on maternal deprivation is an example of this.

The precedent: Bowlby and the attachment theory

In the mid-20th century, an English psychiatrist and psychologist named
John Bowlby carried out a series of investigations within the framework of what is known as attachment theory. This is a framework of debate in which the psychological phenomena that are behind our way of establishing affective bonds with other beings are explored, and in it the way in which parents relate to their babies during the first months of their lives has a special importance.

The reason for this interest in the early stages of linkage formation is simple:
it is assumed that the way in which young people form close, continuous and affectionate relationships with others will influence their development towards adulthood and will have an impact, possibly for life, on several of their psychological characteristics.

Through various studies,
John Bowlby concluded that the fact that each baby has regular maternal affection is one of the most important needs for its proper growth.

In part, this was based on his beliefs: Bowlby took an evolutionary approach, advocating the idea that both mothers and newborns express specially selected genes to make both form a strong emotional bond. In other words, he believed that the establishment of maternal attachment was genetically programmed, or at least part of it. Furthermore, he argued that the strongest bond a person can establish is based on the relationship he had with his mother during the first years of life.

This phenomenon, which he called
monotropy , was not consolidated if this exchange of affectionate gestures accompanied by physical contact (classically, during breastfeeding) took place after the baby’s second year of life, and not before. In other words, the maternal deprivation , the absence of regular contact with a mother who provided affection during the first months of life, was very harmful because it went against what our genetics would have programmed us for.

What did these studies consist of?

Bowlby also relied on empirical data . In this sense, he found some data that reinforced his theory. For example, through research commissioned by the World Health Organization on children separated from their families because of World War II, Bowlby found significant evidence that young people who had experienced maternal deprivation from living in orphanages tended to be intellectually retarded and had problems successfully managing both their emotions and the situations in which they had to interact with others.

In a similar investigation, he noted that among children who had been detained for several months in a sanatorium to treat their tuberculosis before they were four years old,
had a markedly passive attitude and were much more easily angered than other young people.

From that point on, Bowlby continued to find data that reinforced his theory. He concluded that maternal deprivation tended to generate in young people a clinical picture characterized by emotional detachment from other people. People who had not been able to form an intimate bond with their mothers during their early years were unable to empathize with others, because
had not had the opportunity to connect emotionally with someone during the stage in which they had been sensitive to this type of learning . Harry Harlow was an American psychologist who during the 1960s set out to study Bowlby’s theory of attachment and maternal deprivation in the laboratory. To do so, he conducted an experiment with Rhesus monkeys that under current ethical standards would be unfeasible because of the cruelty involved.

What Harlow did was, basically,
to separate some macaque cubs from their mothers and observe how their maternal deprivation was expressed . But he did not limit himself to passive observation, but introduced into this research an element with which it would be easier to know what the macaque cubs felt. This element was the dilemma of choosing between something similar to physical contact related to affection and warmth, or food.

Harlow placed these young in cages, a space they had to share with two artifacts. One was a wire structure with a full bottle attached, and the other was a figure similar to an adult macaque,
covered with soft plush, but without bottle . Both objects, in their own way, pretended to be a mother, although the nature of what they could offer the baby was very different.

In this way, Harlow wanted to test not only Bowlby’s ideas, but also a different hypothesis: that of
conditional love . According to the latter, the offspring relate to their mothers basically because of the food they provide them, which objectively is the most useful resource in the short term from a rational and “economic” point of view. The result proved Bowlby right.
The pups showed a clear tendency to cling to the plush doll, despite not providing food. The attachment to this object was much more noticeable than the attachment to the structure with the bottle, which was in favour of the idea that it is the intimate bond between mother and cub that is really important, and not just the food.

In fact, this relationship was even apparent in the way the hatchlings explored their surroundings. The plush doll seemed to provide a sense of security that was crucial for the little macaques to decide to undertake certain tasks on their own initiative and even to embrace it more strongly when they had
fear. Whenever there was a change in the environment that generated stress, the youngsters would run to embrace the soft toy. And, when the animals were separated from this plush artifact, they showed signs of desperation and fear, screaming and searching all the time for the protective figure. When the plush figure was brought back into their reach, they would recover, though they remained on the defensive in case they lost sight of this artificial mother again.

The plush doll and bottle experiment was of dubious morality, but, Harlow went further by making the living conditions of some macaques worse. He did so by confining the young of this animal species in closed spaces, keeping them isolated from any kind of social or, in general, sensory stimulus.

In these isolation cages there was only one drinking trough, a feeding trough, which was a total deconstruction of the concept of “mother” according to behaviourists and Freudians.Moreover, in this space a mirror had been incorporated thanks to which one could see what the macaque was doing but the macaque could not see its observers.Some of these monkeys remained in this sensory isolation for a month, while others remained in their cage for several months; some for up to a year.

The monkeys exposed to this type of experience already presented evident alterations in their behaviour after having spent 30 days in the cage, but those that remained a full year were left in a state of total passivity (related to catatonia) and indifference towards others from which they did not recover. The vast majority ended up developing problems of sociability and attachment when they reached adulthood, were not interested in finding a partner or having offspring, some did not even eat and ended up dying.

When Harry Harlow decided to study the maternal behaviour of macaques he had been isolated from, he was faced with the problem that these female monkeys did not get pregnant. He used a structure (“the rape colt”) in which the females were strapped in, forcing them to be fertilized.

Subsequent observations showed that these females not only failed to perform the tasks typical of a mother of their species, ignoring her young most of the time, but sometimes even mutilated their young. All this, in principle, because of maternal deprivation, but also because of social isolation, during the first months of life.

Conclusions: the importance of attachment

Both John Bowlby’s research and Harry Harlow’s experiments are now widely considered, although the latter are also a case of clear torture of animals, and
because of its ethical implications have received strong criticism .

Both experiences led to similar ideas: the effects of the absence of social interactions that go beyond the most immediate biological needs and that are linked to affective behaviour during the first stages of life tend to leave a very serious and difficult to erase mark in adult life.