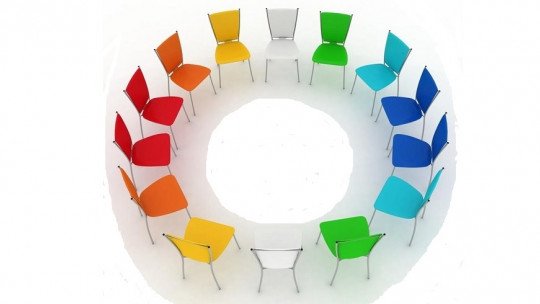 Most people are meeting new people all the time . With most people we usually establish a superficial, rather casual contact. But sometimes we want to meet someone for real, especially when it will be someone with whom we will have a more fluid relationship. The perfect example is starting a new job, or starting a school year in childhood. And meeting someone from scratch can be more difficult than it seems, especially for those of a shy nature.

To deal with this situation, it may be useful to carry out different presentation dynamics such as those we will mention along the following lines.

What is a presentation dynamic?

Before going into the different presentation dynamics, it is advisable to first make a small introduction to know what we are referring to.

Dynamics is understood as the set of resources, strategies, methods and techniques used with the purpose of achieving a given objective, generally causing some kind of movement or action by one or more agents.

As regards the presentation dynamics, we would be talking about different methods designed to facilitate initial contact and interaction between the members of a group , so that deeper links can be established later or that there is recognition between individuals. They are generally very useful for everyone, although they are especially useful for those who are more shy or difficult to establish initial contact.

It is usual that the presentation dynamics have a certain recreational component , in such a way that a positive emotional climate is established and the learning and relaxation of those involved is favoured.

It is important to bear in mind that the effectiveness of such a resource is not only linked to the practice itself, but will be conditioned by a wide variety of factors. Among them we can find the context, the situation and the moment in which they are carried out, the way of approaching those who are going to carry it out, the level of relation of the dynamics in question with the objectives that are intended to be fulfilled, the expertise of those who set it in motion or the adaptation of this to the capacities, motivations and even personality of those who are going to carry it out.

Likewise, it may seem that the dynamics of presentation are typical of children’s contexts. But although it is true that are especially useful and are widely used in the world of education , they are also carried out among adults and even the elderly. For example, it is not unusual to find practices of this type in the workplace. They can also be used on a therapeutic level to train social skills. They can even be used to perform cognitive stimulation, serving to encourage immediate or even more long-term memory.

Examples of dynamics to be presented

Below we present a dozen simple dynamics that can be used in a versatile way in a wide variety of contexts.

Probably the simplest dynamic is based on forming a circle. Each participant will say his/her name and basic characteristics before moving on to the next one. Once this is done, each person will take turns saying the name of each member of the group. This can be done more quickly or change direction from time to time to make it different.

A simple but effective game. The participants must form a circle, and at first each member of the group takes turns to tell the rest his or her name. After that, a ball is caught that the members of the group must pass around. The person who receives the ball must say the name of the person who has passed it on before throwing it to another person, who must do the same. It is not necessary to follow an order in the passes, and this can be random as long as all the participants are integrated.

If you want to add a competitive component or as a way to end the game, as time goes by the ball will be thrown faster and faster. Whoever does not correctly identify the person who passed it or does not manage to catch the ball is eliminated. However, this last paragraph should only be applied in a playful context and is not recommended for certain sectors of the population.

A dynamic similar to the previous one. In this case, there is a ball of wool that will be unravelled as it passes between the members of the group . This is one of the most frequently used presentation exercises for children.

First a person will say his or her name or some aspect previously agreed upon by the group as the main element of presentation, and then the ball will be passed on to the next person. This person should repeat what the previous one said and add his or her own presentation before passing it on again, and so on.

4. Introduce yourselves to each other

All participants are placed in groups of two. They will introduce themselves by saying their basic data and some identifying or unexpected detail or some particular taste or dream . Later the whole group will meet and each member of each pair will introduce the other.

This is a somewhat different way of presenting oneself, in which each of the group members will draw on a sheet of paper four vignettes representing aspects that identify the person or recent experiences. After that, they will be put in pairs and each one will explain to the other what they have drawn and why it represents them .

This dynamic is based on choosing familiar phrases, sayings or drawings that are divided in two and distributed among the members of the group. Each person must find the person who has the missing part of the phrase or picture.

Each member of the group receives a card and a safety pin. They will put their name on it, horizontally or vertically, and from at least one of the letters will generate other words .
Specifically, positive adjectives about the person.

After that, a time is left for the participants to walk around the room. Finally, they will meet as a group and introduce themselves formally. The rest will try to remember the characteristics and/or the names of the rest, asking each one for the characteristics of a colleague.

A die of relatively large proportions will be created beforehand, on each face an interesting aspect will be placed that can be used to present itself . For example “my main motivation is…”, “I want to work on…”, “my favourite dish is…”. Later, each member of the group will roll the dice and must give an answer to the sentence that comes up. This will be repeated as many times as desired. This is one of the most popular presentation exercises for adults.

Another way of getting to know each other is through what we identify with. Thus, the group is proposed to look for an animal, superhero, superpower or movie/book/video game character that each member considers represents him/her or has the same qualities. They will also evaluate how it looks like, what they would need to get closer to being like him/her and why they like it.

Then everyone will explain which character they have chosen and the meaning of the chosen being will be explored in groups.

The group is put in a circle or in several subgroups. Each person should think of different gestures that symbolize their name or that are based on the sounds of their letters, and then show them to the others. The rest should guess. After that, it is possible to make a chain in which each member of the group makes his or her own gesture and that of the previous ones.