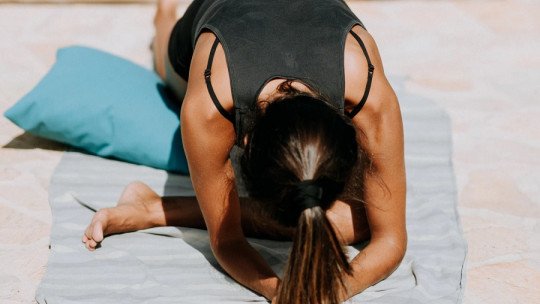 Obesity and overweight are increasingly relevant problems in our society. It is not merely an aesthetic issue: there is a direct relationship between overweight and a greater probability of suffering health problems of varying severity. That is why keeping weight within healthy limits (avoiding both excess and deficit) is a highly relevant issue and something that goes far beyond a merely aesthetic question.

One of the means to achieve this maintenance, as well as to strengthen and keep us active and healthy, is the realization of sport . However, our responsibilities and tasks are usually many and very demanding, which often makes it difficult to find time to go to the gym or go for a run.

Below we leave you with a total of ten exercises that are easy to understand and perform and that can help us greatly to maintain our figure and even to lose weight if performed systematically. The exercises we propose can be done in relatively short periods of time, it being advisable to do several series of repetitions of the same type before moving on to another (in the same training session).

In addition, most of them require nothing more than our own body to be done or can be done with materials that probably most of us have at home. Thus, the exercises that we are going to propose are easy to do and do not require spending money or using large materials.

Although it is generally understood that some of the exercises that most easily allow for weight loss are aerobic, we will also see several of the anaerobic type, since in addition to gaining strength they also help to become stronger and reduce excess kilos . It is also recommended that the various exercises proposed be combined with others, whether or not they are in these examples. In fact, it would be possible to do a small training routine with those present here.

On the other hand, you have to take into account that diet and genetics are very important factors, so only by doing these exercises is it unlikely that you will lose much weight.

This exercise is tremendously useful for exercising the deep internal abdominal area, strengthening not only the abdomen but also the back, the buttocks, the shoulders and the arms. The idea is to keep the torso and abdomen raised parallel to the floor, leaning only with the feet and forearms on the ground. The rest of the body will be in the air, making a special effort with the abdomen and working on the core to a great extent.

This position must be held for a specific period of time. Usually most people hold the position for between 30 seconds and a minute, then take a short 10-second break and do either a retake or another exercise. Other experts, however, recommend that you do several repetitions of 10 to 15 seconds in order to maintain the effort.

A seemingly simple exercise that works areas such as the abdomen, buttocks or legs. To do them correctly, we must first position ourselves with our legs slightly apart (at shoulder height). As regards the arms, there are multiple positions that can be used , although it is common for them to be extended forward (and we can even take some weight with them to work on the arms as well) and kept straight in parallel.

The exercise in question is quite similar to what we do when we sit down: pulling our buttocks back and with a straight back, we will lower the trunk as we put our weight on the legs and the heels of the feet, making the first ones parallel to the floor before returning to the initial position. About three sets of ten repetitions are recommended .

Frog jumping is a simple but interesting exercise that helps to reduce weight, accelerate metabolism and work muscle groups such as the chest, abdomen, buttocks and legs . Doing it is simple, although it requires effort. Starting from an initial position with your feet shoulder-width apart, you will descend with your back straight as if you were going to do a squat, and then climb at full speed and perform a vertical jump.

They are frequently done together with the abdominal plate or with the squats , being usual that the jump is done immediately after. These jumps can be done the same number of times as the exercise they accompany, or in two or three series of between ten and fifteen repetitions. This is one of the simplest exercises to lose weight at home.

Pushups are part of the regular repertoire of most training sessions. Its operation is relatively simple: after lying face down on the floor, we support the hands separated at shoulder level. Once this is done, we proceed to lift our weight with our arms and chest muscles, leaning only on our hands and feet , with our legs fully stretched. The exercise will be to go up until we stretch our arms and slowly lower our weight until our chest touches the ground, without letting our weight fall.

This is an exercise that can be strenuous, but it helps us to strengthen our pecs, shoulders and arms. It is also possible to vary the separation between the hands to work more deeply on specific muscles. It is generally recommended to do about three series of twelve repetitions, although as the days go by you can increase them

A great way to train the abdomen, buttocks and legs, cycling is a frequent and highly regarded exercise that is also easy to perform. The starting point is to stretch out on your back on the ground, with your legs bent and your arms bent in such a way that you hold the back of your head in your hands. Next we will raise our legs and buttocks in such a way that our legs are perpendicular to the ground , proceeding to carry out the action of pedalling alternately, with each leg. The torso and head are also raised.

To work more muscle areas, it is possible to work on oblique abdominals if we try to bring the contralateral elbow closer to the knee that we have bent on each pedal. We recommend about three series of thirty seconds, or between fifteen and twenty pedals with each leg in each series.

A type of exercise apparently simple to perform but in which a large number of muscles are worked to a great extent.

To do this, we will first stand upright, with our feet together and stretched out, and our arms attached to our bodies. Then we will make a small jump in which we will open our legs around 45 degrees, at the same height as our shoulders, while we will stretch our arms laterally until they touch each other above us (as if we were bumping the palms of both hands against each other). Then we’ll make another small jump back to the starting position, and repeat it again and again .

It is recommended that you take about thirty seconds in a row before you pause and move on to another series (up to about three) or pass or another exercise.

They are very useful for training the legs, buttocks and back as well as working the abdominals, arms and torso to some extent. They are also a good cardio exercise that helps us speed up the pulse, sweat and reduce toxins as well as contributing to calorie loss.

This is one of the few exercises in which we are going to need the help of an element outside our own body. However, this element is something that most of us have at home: a stable chair or bench. This is an exercise that works especially the triceps , but it also involves the use of the abdominals, chest and shoulders.

This exercise is done by leaning on the front end of the chair with our hands, keeping our legs stretched out and the heels of our feet on the floor. The hips should remain in the air, keeping the arms completely stretched in the initial position. Then we must bend our elbows so that our hips go down but without our buttocks touching the floor. After that, we will return to the initial position by extending our elbows again. We recommend about three series of between ten and fifteen repetitions.

This exercise is very useful for working on the abs and back, especially the lower back. The exercise is performed as follows: we start from an initial position stretched face down on the floor , with legs stretched and arms resting on the floor (either bent or stretched). Then we must lift the winch and the legs, leaving only the abdomen in contact with the floor. After that we return to the initial position.

This exercise can be done in a series of ten to fifteen repetitions. However, it must be taken into account that implies a great effort for the spine , which can generate injuries and back problems if it is done badly or in excess.

Another very useful exercise to lose weight while strengthening our body is the skater jump.

This exercise starts from an initial position in which we will keep with our torso straight but leaning forward, our feet apart and our knees bent . Once this has been done, we will proceed to make a small jump towards one of the two sides, falling on the ipsilateral leg (that is to say, if we jump to the right we support the right leg and vice versa) and then pass the opposite leg from behind, supporting the opposite foot also from behind. Then we jump to the opposite side, with the same procedure but inverting the position of the legs. The arms will accompany the movement of the feet, while the abdomen remains contracted.

The resulting image will remind you of the movement a skater makes when moving, and the exercise is based on continually changing the position of the legs. This is an exercise that works the core as well as the buttocks and legs and is recommended to be done in series of about thirty seconds to one minute.

Another simple yet useful exercise is weight-training rowing, which allows you to strengthen your back, abdomen, biceps or shoulders. In principle, this exercise requires weights, although it is possible to replace it with carafes or tetrabricks of a suitable weight if they are not available.

The exercise is done starting from an initial inclined position, with the feet separated and the knees bent at the same time that we let the weights or the equivalent of them that we are using hang from our hands.

Then we will exercise strength with our back and abdomen while lifting the weights until they practically reach the chest, as if we were using a paddle. After a few seconds we will return to the initial position. This exercise is very complete and very useful to strengthen the body and in the process also lose weight. It is recommended to do two or three series of about ten or fifteen repetitions each.

In addition to the previous exercises, in order to reduce weight, we recommend the performance of activities such as spinning, cardioboxing or dancing, being these very complete aerobic exercises that by themselves help to lose weight in a way that is usually enjoyable and that we can do at home (the first one as long as we have an exercise bike).