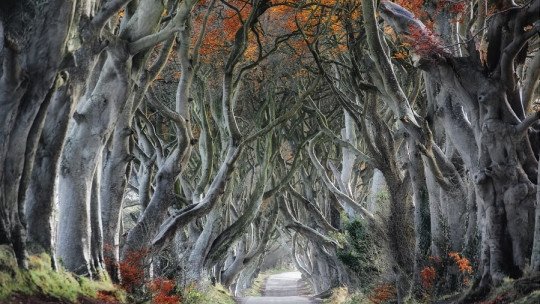 Irish legends are characterized by a mystical and symbolic content typical of Celtic culture . Its main characters are usually magical, divine or mythological beings with supernatural powers, who live with humans in different ways. The legends take place in forests and lakes, but also in worlds that are beyond human experience.

We will see in this text 10 of the most popular Irish legends, as well as their contents linked to the mythology of this island.

The 10 most popular Irish legends

Legends and myths are a fundamental part of Irish culture. They allow us to know the magic of its forests and castles, as well as the fantastic beings that have inspired the cinema and literature. Furthermore, are important narratives to understand the past and present of this attractive country . The following list brings together 10 typical Irish legends.

In Irish mythology, Tir na nÓg or Tirnanoge is an island where time seems to stand still at times. Its name means “Land of Youth” and it is the place where the tribe of the gods (the Tuatha Dé Danann) lived after having left Ireland. It is said that it is an almost inaccessible island , it is only possible to get there after a long journey, or under the invitation of a fairy.

It has been described as a beautiful place where disease does not exist and where monks and heroes from different times have come. One of them was Osi, son of the mythical warrior Fionn Mac Cumhaill, who was invited by Niamh Chinn Óir. It is said that Osín spent three years in Tir na nög and, when he returned to Ireland on a horse, found that his hair and skin were suddenly old: three hundred years had passed since his departure. He was found by St. Patrick, to whom he told of his adventures in the Land of Youth.

They say that some bandits wanted to play a joke on St. Patrick. One of them, named Macaldus, pretends to be dead and the others ask the saint to resurrect him, without success. When they try to revive Macaldus, the bandits realize that he was really dead. At that moment they run after Saint Patrick to ask him, this time in earnest, to raise him from the dead.

The saint decides to help them, but also imposes a punishment: he wraps Macaldus in chains with a padlock, throws the key into the sea, and sends him off in a solitary boat . Eventually, the boat arrives at the port of Man, where the inhabitants rescue Macaldus. While on the island, the bandit is trained to be a priest, and on the day of the ordination one of the cooks arrives, bringing with him a key that he had just found inside a fish. Macaldus gladly admits that this is the key that would finally free him from his chains.

Near the Burren region in Ireland, there are the Cliffs of Moher, a place famous for its castles, caves and mythology. In these cliffs there is a set of rocks arranged in a peculiar way. It is a rock formation that seems to be the face of a person facing the sea .

They say it is the head of the old witch Mal, who fell in love with Cu Chulainn (Irish hero). After chasing him through forests and Irish castles, one fine day Cu Chulainn jumped off the cliff. Mal does the same thing, but he doesn’t succeed: he crashes into the cliff and his head is forever portrayed on the rocks.

They say that Westmeath County, in the town of Uisneach, is the gateway to the underworld. This is the place where kings and queens are buried. Surrounded by a lake on the top of a hill, this town is the site of a festival known as the “fire festival”. It is said that this is the place where the life of Lugh, the sun god, ended. However, it continued to exist in the form of comments that it looks like every May in the same area. For the same reason, in the festivities of the fire, dances, music and fire are dedicated to him as a sign of offering .

5. The ghost of Malahide

Near Dublin there is a castle called Malahide. Legend has it that in this enclosure wanders the spirit of a man named Anthony, In life, he was the man in charge of protecting the daughter of Richard Talbot, the 15th century Irish count. One night, the earl’s daughter suffered an attack, for which the court unjustly blamed Anthony. Although he was not at the scene of the attack, the man was sentenced to hang. It is said that from that day on, Anthony appears in the castle and its surroundings , seeking forgiveness and justice for his case.

Tara Hill is the prehistoric site of the tribe of Irish gods (Tuatha Dé Danaan). These gods were able to control the sunlight and were direct descendants of the creator gods. Throughout time, historians and archaeologists have studied what lies beneath this temple.

Among other things, an oval monument more than 100 meters wide has been discovered inside the Tara hill. Surrounding this structure, and as if it were a crown, there are 300 holes, 2 meters wide each. This suggests that there were once 300 columns around the hill , and not only that, but there must be treasures to be discovered in the subsoil of the hill.

In Roscommon County, it is famous for the rock chains that surround it. Historically, this place is recognized as part of the capital of the kingdom of Connacht, a place that was home to Ulster Cycle characters, such as Queen Maeve and Ailiill de Connacht. It is said that one of the caves, called Oweynagat or cat cave, was used as a gateway connecting the world of humans and the world of the gods . It is also said that some destructive creatures have entered the earth through this door.

Leprechauns are mythological, tiny beings with green suits and red beards. In fact, the word “leprechaun” has its origin in Irish terminology to refer to a “small body” . More than a legend, this is one of the most representative characters of Irish culture. They are said to have a bad character and were once inhabitants of Ireland (it is believed that they were the first to arrive). They also say that they appear in the forests and valleys, sometimes carrying a pot of gold coins. The ambitious often follow them and try to steal them, which can easily make them angry.

Like leprechauns, banshees are mythological beings. They are female or fairy-like spirits. In fact, the word banshee means Woman (Ban), Fairy (Shee). Their presence does not usually indicate anything good (they say that it is observed when someone is about to die).

It usually takes the form of a woman wrapped in a layer that covers her completely . Other versions say that banshees appear as a beautiful young woman, or as a midwife. In addition, she makes herself present by means of a lament that can begin as a whisper and advance to a loud cry, which is the final omen of the tragedy.

Legend has it that one day, the warrior Crunn arrived at the capital of the kingdom of Conchobor to watch a horse race presided over by the king. During the course of the race, Crunn claimed that his wife was faster than some of the competitors, even though she was pregnant. The King of Conchobor asked the wife to prove this and, to everyone’s surprise, she did. She later gave birth to two children, one of whom was named Cuchulainn.

Despite having grown up with the expectation of always being in the shadow of others; very young, Cuchulainn managed to kill an animal that no one could beat . He has been known ever since as a hero who comes out victorious from every battle and is the bearer of the best weapons. In fact, around the legend of the hero Cuchulainn, many other stories have developed.