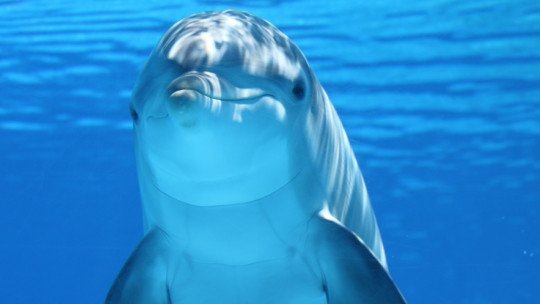 Dolphins are one of the most valued and popular animals worldwide. It is an animal species that has inspired human beings since ancient times, with even romantic overtones and often being a symbol of freedom, peace and joy.

Among their many qualities, the intelligence of dolphins is one of the most valued , together with their sociability and capacity for empathy with both their own species and others (including human beings). The dolphin has been identified along with other cetaceans, primates, elephants and some bird species such as crows as one of the most intelligent non-human animal species (surpassing many of them in capacity). Throughout this article we will observe different curiosities and information linked to its high cognitive capacity.

What does it mean to be smart?

Before going on to look at different data and curiosities that help us to see the great potential and intelligence of dolphins, we should make a brief review of what we consider intelligence.

Although there are multiple theories and models in this respect, we can briefly define intelligence as the capacity or set of intellectual capacities that allow a living being to successfully adapt to the environment that surrounds it, being able to solve more or less complex problems and use the resources available both in the subject himself and in the environment in the most efficient way possible. This implies the ability, among other aspects, to organize mental content, restructure and shape it, and even a certain capacity for abstraction.

Although traditionally this capacity has been linked to and focused almost exclusively on humans, the fact is that there are many animal species that show considerable behaviour as intelligent. And among them stands out the dolphin, which presents behaviours and a brain structure that make us think of this species as one of the most intelligent animals . Some even believe that, if they had opposable hands and thumbs, they could even surpass our abilities.

Most people know that dolphins are very intelligent beings, but the truth is that there are many facts that are unknown or that can call attention to this issue. Here are some interesting facts about these beings that make us appreciate the high level of intelligence of dolphins.

Dolphins enjoy not only great intelligence, but also capabilities that until a few centuries ago were considered the exclusive heritage of human beings. One of them is language. As with other cetaceans such as whales, it has been observed that dolphins enjoy a complex system of communication based on their characteristic clicks , being able to identify different elements with them and even seemingly refer to their emotional state.

2. Have a proper name

Linked to the above, different investigations have proved that the human being is not the only creature that is identified by his peers in a symbolic way, with a distinctive name for each one of us. And it has been verified by means of the registry of their language that the dolphins use these whistles to address others , possessing whistles that identify other subjects.

One of the aspects that has been most linked to cognitive ability is the ability to use existing resources in the environment in a creative way in order to achieve a specific goal. It has been observed that dolphins are capable of this, using among other elements marine sponges when they search for food among corals . This requires considerable cognitive skills, understanding the fact that they may experience damage and the need to employ an element to avoid it, as well as to find it and put it to practical use.

4. Have sex for pleasure

Most animals reproduce only in seasons when females are fertile. Dolphins, like some primates and humans, are one of the few animals that do not consider sex only in their fertile phases, but have sex on a regular basis with the sole purpose of obtaining pleasure . In addition, they carry out different flirtatious behaviors that they seem to enjoy.

5. They accompany in the last moments

When a dolphin is in its last moments, it is possible to observe how its group tends to help it with its own bodies to rise to the surface , so that the creature can keep its spiracle (the orifice through which it breathes) out of the water in order to be able to breathe more comfortably to relieve its suffering. This shows not only the intelligence of the dolphins, but also the capacity of these creatures to empathize.

The use of animals in the context of war has been relatively common throughout history. They were generally used for transport or as a key element in causing harm (horses, camels, elephants and dogs are good examples) or for communication (as in the case of pigeons).

Although not particularly well known to most people, some cetaceans have also been used in the military. The high intelligence of the dolphins and their ability to emit and perceive ultrasounds have been used to detect underwater mines, boats and divers. They can also transport and lay mines (by fleeing after laying them) and even serve as soldiers to attack divers and boats. Their use was frequent during the cold war and even today some armies still use them.

7. They can commit suicide

Although animal suicide is widely discussed, it has been observed that many dolphins seem to decide to end their lives by either stopping breathing (in the case of the breathing dolphin this is not unconscious and automatic but requires control on its part), feeding, or even by repeatedly crashing into rocks or objects. This requires sufficient cognitive capacity to understand what death is and how it can be provoked, a capacity that dolphins seem to have.

A sign of the intelligence of dolphins is their ability to transmit knowledge to their peers. It has been observed how in some cases of dolphins that have been in captivity how, after having been taught some skill or way of doing certain actions, these ended up being replicated by much of their group, having been transmitted learned from the original.

It has also been observed that the language or the way of communicating can vary between different groups of these animals , and the existence of learned “dialects” can be observed. Likewise, social play, mutual cooperation, caring for other people’s offspring and the transmission of hunting strategies have been seen as signs of culture within these animals.

9. Your brain structure is complex

The intelligence of the dolphins has been an element that has awakened the curiosity of many people, having carried out different analyses and research on this subject. At a neuroanatomical level, it has been observed that they have a very complex brain structure with a very high level of encephalization (it has been proposed that in some cases they even have a higher intellectual capacity than humans) and a size that on average exceeds ours. In fact, it is one of the animals that has the largest brain in relation to its body size.

10. They recognize themselves in the mirror

Some experiments, already classic, carried out with different animals such as dolphins show that they have the ability to recognize themselves in the mirror. This implies the notion of a different self from the rest, the recognition of one’s own characteristics and actions and of the fact that a reflection is not a different creature that is imitating us but the product of a refraction. This is another example of the intelligence of dolphins.

11. Empathize with other species

You may have seen a movie where a dolphin saves a swimmer or a castaway from a shark attack or drowning. Although it may seem an exaggeration or even a display of romanticism, the truth is that this is something that happens in reality.

Dolphins have the ability to empathize not only with beings of their own species but also with those of others. There are many cases in which these animals (and we are talking about animals in the wild, not trained for this) have saved the lives of many people by acting as bait or by surrounding a group of dolphins with a human being in order to protect it. This protective behaviour has also been observed targeting other species, such as in some cases of whales attacked by sharks. They are able to understand that another creature is suffering or, in our case, that it is drowning, something that requires a high intellectual capacity.

Due to the very high level of intelligence of dolphins and their multiple cognitive abilities, different movements and proposals have appeared for dolphins to be considered as “non-human persons”, making them holders of the same rights. This has happened in India, where the Central Zoo Authority has banned shows with these animals, as well as in Costa Rica, Hungary and Chile. Different zoos in Spain, such as Barcelona, have also prohibited such shows.

In addition, some organizations have requested the approval of the cetacean rights declaration, based on the high sensitivity and intelligence of these beings.