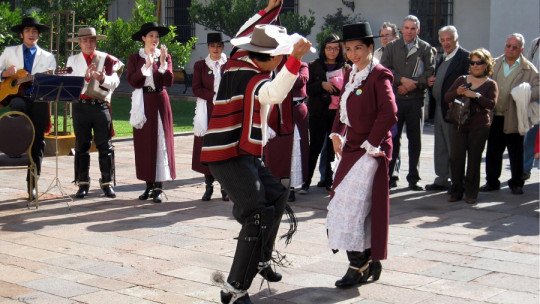 Dancing is a way of expressing ourselves on a physical level; every country, city and even town has a series of typical dances, which are part of its history and culture.

In this article we will focus on Chile to talk about its dances, for being a country full of life, history and wealth in this sense. Specifically, we will know 15 typical dances of Chile, classified by their zone : north, center or south.

In Chile, different types of festive dances are very typical; these dances are folkloric expressions that usually have a religious and/or festive motivation . Most of these dances have many years of history.

The typical dances of Chile can be divided according to three zones of the country: the North zone, the Central zone and the South zone. In this article we will follow this classification.

The National Dance of Chile

Through the typical dances of Chile, the country expresses its national identity, its culture, its values and its ways of celebrating. First of all, we will see what Chile’s dance par excellence consists of, that is, its national dance: the famous cueca.

Cueca is Chile’s national dance, and therefore, it is a very popular dance. It is danced in all regions of the country, specifically since 1824 . On September 18, 1979 cueca was declared the national dance of Chile.

How do you dance the cueca? First of all, the huasos (that’s how they say to Chilean men from the center or south), look for a girl they like, and offer her their arm. The girl gets up and accompanies the guaso; they walk around until they reach an area of the room or track. They stand in front of each other, with a handkerchief in their hands, and start dancing the cueca.

The huaso turns in a suggestive way and “chases” his partner (she “runs away”); then he uses the handkerchief as a bow, surrounding the girl with it but without touching her, and “brings” her to his side.

Dances from the North of Chile

Let’s see some of the typical dances of Chile in the northern part of the country:

The carnavalito is another of Chile’s typical dances; this time from the northern zone. In fact, its origin is Bolivian, but it is also danced in Chile (in the North) and in Argentina , especially during the Carnival festivities.

The musical genre that accompanies the carnival is the “huaino”, made from instruments such as the bass drum and the quena. The carnavalito is danced in group (by couples). Its choreography is joyful and striking.

The third of the typical dances of Chile that we will know is the torito, also danced in the north of the country. This dance is typical of the religious festival of San Pedro , which is celebrated every June 29.

It is also a group dance, where two men dressed in black and white (each one of a color) dance to the center of the room or place. In addition, they wear a rather large bull mask.

The next dance, also from Northern Chile, is the huachitorito. It is especially typical of the Christmas season . It is accompanied by instruments like: the guitar, the bass drum, the snare drum, the violins, the quena and the accordions. To make it, different couples are formed in rows of two (or in a circle).

Couples surround a couple in the middle. The dance is staged while the Christmas shepherds visit Christmas cribs in the houses of the city or town.

This is a version of the Chilean cueca; in this case, it has no lyrics, only melody . The dance of the cueca nortina is accompanied by instruments such as the trumpet, the tuba, the snare drum and the bass drum. Its melody is very happy, festive, and is another of the typical dances of Chile that are danced in pairs.

The bong is another very festive dance. It is also danced in pairs and with handkerchiefs. It is similar to the cueca, since includes turns that go according to the rhythm of the music . In the cachimbo there is also a “love conquest”, where the man is the one who performs such an action. Its melody is composed of guitar and accordion.

Dances from the South

We are now going to tour the southern part of the country. What Chilean dances do we find in this area?

Another of Chile’s typical dances is the rib eye. In this case, it is a typical dance of the South. It is generally a dance that only men perform, although it is true that sometimes the couple is included. The costillar is a dance that represents a commune of the central zone of Chile, called Chillán . To perform this dance, a bottle is placed in the center of the floor.

The pericona is another typical Chilean dance; it is very popular on the island of Chiloé. Four people participate in the pericona, which dances by performing six turns from right to left .

Chocolate is a couple’s dance. It has Spanish influences, especially in relation to the turns given by its participants , and the position they adopt. Chocolate has different versions, like many other typical Chilean dances.

Another of Chile’s typical dances is the zamba refalosa, a very festive dance. It is performed in pairs, with a handkerchief in the hand. The couples remain separated . The movements include mostly spiral turns.

Another typical dance of the Chilean south is the sirilla, although its origin is Spanish. It is mainly danced on the island of Chiloé .

It is executed in pairs; the pairs are placed facing each other (forming a square). The dance includes different movements with turns and changes of position. It is also a dance that includes handkerchiefs.

Dances of the Central Zone

We changed zone, and now we are going to see the typical dances of Chile in its central zone:

The dungeon includes a choreography that represents two sparrowhawks while surrounding a dove . The dungeon dancers perform somewhat funny movements in order to “conquer” the love of a woman. Precisely, the name of this Chilean dance originated from this “mazamorreo” that takes place during the dance itself.

The pequén is another typical Chilean dance; its name comes from a country bird with this name.

This dance can be danced in different ways. In the central area, “the little peasant” is danced. In this case, the dancers dance imitating the flight of the pequén . The dance begins, like many others, with the choice of a dance partner (the man initiates it). Then there is some conquest and flirting between the two.

Porteza is also another of Chile’s best-known typical dances. The melody of porteza also belongs to the cueca. To begin with, the man dances doing small jumps; then he alternates his legs doing crosses , to the sound of the woman’s dance, who performs a so-called “escobillado” through her feet.

The sajuriana, also known as sajuria and secudiana, is typical of a Chilean region called Ñuble . The melody that accompanies the sajuriana is a melody similar to the copla. In this case, the dancers dance separately, waving a handkerchief up and down. The movements are quite improvised, and include “zapatoneados”.