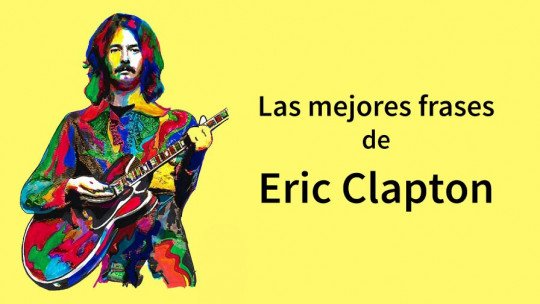 Eric Clapton (1945) is one of the main figures of modern music . Born in England, his contribution to Blues and Rock is absolutely fantastic.

Nicknamed “slow hand” (for his incredible guitar solos) or “God”, Clapton has been considered the second best guitarist of all time according to the prestigious Rolling Stone, only surpassed by Jimi Hendrix.

Phrases of Eric Clapton and his best famous quotes

Clapton’s life has not been a bed of roses. In love with the wife of his best friend George Harrison (of the Beatles), he lived obsessed with Pattie Boyd, to the point of composing the song Layla to show her his love. Another mythical song by Eric Clapton, Tears In Heaven, tells us about the premature death of his son.

In order to get to know this unheard of talent in the world of music , we have decided to create this compilation with his best famous phrases and reflections .

1. And it makes me feel so angry to know that the flame is still burning… Why can’t I get it to stop? When will I ever learn?

From his song “Old Love”, Clapton curses himself for still being in love with a love that is already far away in time.

2. The music became my relief, and I learned to listen to it with my five senses. I discovered that this way I could erase all the feelings of fear and confusion related to my family. These feelings became even more acute in 1954, when I was nine years old.

He talks about his childhood, marked by fear and bad environment.

3. I remember thinking that her beauty was also internal. It wasn’t just her looks, although she was certainly the most beautiful woman I had ever seen. It was about something deeper. It was coming out of her too. It was her way of being.

He’s talking about Pattie Boyd, who was also the wife of the beatle George Harrison.

4. Creating a song is as easy as shaping a feeling.

To translate feelings into beautiful musical works is one of his gifts.

5. My main philosophy about the way I make music is that you can reduce everything to a single note, if that note is played in the most sincere way.

Honesty in songwriting and performance is the foundation of every artist.

6. The only education I ever really had was finding out about the blues. I mean, I wanted to know everything.

His obsession with the blues led him to share the stage and recording studio with idols like BB King.

7. I became convinced that, for some strange reason, I was invulnerable and would not get hooked. But addiction doesn’t negotiate, and it slowly spread through me like a fog.

In this famous quote, Eric Clapton confesses that he lived hooked on cocaine and alcohol .

8. When I was choosing a guitar, I was looking at how worn it was… It’s like walking into a restaurant. If it’s full, you eat well.

An excellent metaphor for a string master.

9. The only planning I do is about a minute before I play. I try desperately to think of something that will work, but I never sit down and figure it out note by note.

Improvisation is part of the DNA of the blues and, by extension, of Eric Clapton.

10. His playing is totally hybrid. Musically it makes no sense to the scholar. When he plays the piano, it only makes sense to the listener. If you were a musician you would say: but what are you doing? It doesn’t make sense. And the same thing when he plays the guitar. Whatever you do, it’s like you have to wait a year or two to get to the point of being able to hear it. The first time you hear it, it’s useless. Then you think about it and you realize it’s perfect.

In these statements he talks about the great Bob Dylan.

11. Being the author of something so powerful is something I’ll never be able to get used to. It still disturbs me when I touch it.

He talks about his song Layla.

12. The guitar was very bright and had a bit of a virginal streak to it. It looked like an elegant device from another universe and, as I tried to strum it, I felt that I was moving into the territory of maturity.

About his beginnings with the instrument.

13. I was interested in white rockers until I discovered Freddie King.

That performer changed his perspective on music.

His passion for music goes beyond all limits.

Clapton is aware of his own abilities, which does not make him pretentious if we consider the quality of his musical work.

16. I am and always will be a blues guitarist.

Although he has been a very versatile artist, if you ask him he is very clear: he considers himself basically a Blues lover.

17. The sound of an amplified guitar in a crowded place was so hypnotic and addictive to me that I could cross any kind of border to be there.

Another famous quote from Eric Clapton, this time about his adolescence.

18. For me there’s something primitively soothing in the music, it goes straight to my nervous system, so I feel ten meters high.

Does music have a calming effect on us? Eric Clapton seems to be sure that it does indeed manage to relax us.

19. I didn’t really fit in with sports and group activities like any other child, I couldn’t find a place. And music was not part of the curriculum of the population.

A reflection on his childhood, which was somewhat sad and lonely.

20. Some say of me that I am a revolutionary. That doesn’t make sense, all I did was copy BB King.

Humility before whom he always considered a master of the Blues.