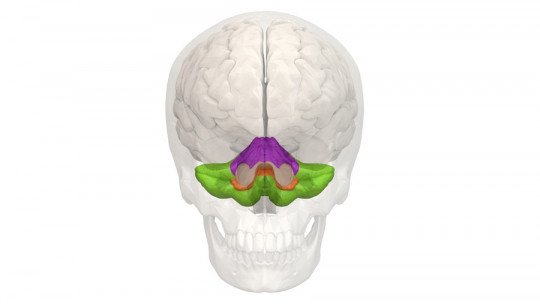 When we think inside the head, we usually imagine a brain directly. With its gray, lobed structure and somewhat amorphous mass. The brain, however, is just another part of the brain, which is considered the most important organ in the body.

Today we explain to you what one of its parts consists of: the cerebellum. We will see what its physiological functions are, its anatomical location, why it is so important for our organism, and finally we will review curiosities about the cerebellum .

What is the cerebellum?

One of the curiosities about the cerebellum is its location. The cerebellum, as we’ve already seen, is a part of the brain. The brain consists of five parts: cerebrum, cerebellum, midbrain, pons and spinal cord. The cerebrum, therefore, is an organ of nerve mass contained within the skull.

This organ in turn is wrapped by the meninges, which are three membranes called, from outside to inside: dura mater, arachnoid and pia mater. These membranes are made up of connective tissue that cover the entire central nervous system, providing soft protection below the hard protection of the bone structures.

The cerebellum is located at the back of the brain and is made up of nerve tissue . Its basic and most important function is to take care of muscle coordination and involuntary movements.

It processes information that comes from other areas of the brain, spinal cord and sensory receptors. Once the information has been processed, it is translated into the indication of the exact time to make coordinated movements of the skeletal muscle system.

Curiosities about the cerebellum

This organ is approximately 10 cm wide and 5 cm high and weighs about 150-160 grams (considering an adult cerebellum), and is involved in virtually all skeletal muscle movements. Here are some facts about the cerebellum that show how it works, what it looks like, and some facts about how it has been studied.

1. Origin of the name

The word “cerebellum” comes from Latin and its literal meaning is “small brain” . This name is perfect for it because the size of the cerebellum compared to the brain is much smaller (the cerebellum is 10% of the brain in terms of size).

There are references associating the creation of the term to Leonardo Da Vinci – who carried out advanced studies on neurology – for the first time in 1504.

The cerebellum is involved in a series of actions, from basic to complex, such as driving, passing an object, throwing a ball, crossing a bridge or playing an instrument. The cerebellum allows the body to move smoothly, maintain a state of balance , coordinate eye movements, motor learning (e.g. riding) and other similar functions.

It was during the 19th century that research and experimentation with this part of the brain began in France. One of the first discoveries that came to light was that surgical removal of the cerebellum produced disorders of movement and muscle coordination.

On the other hand, it is known that the cerebellum is involved in the regulation of emotions and cognitive processes . It is in charge of relating emotional states with lived experiences, maintaining those sensations in time. On the other hand, it intervenes in the learning process of these emotions.

The cerebellum has also been linked to connections between other areas of the cerebral cortex and therefore to cognitive processes such as memory. There have even been studies that relate the size of the cerebellum to a person’s intelligence.

3. Diseases of the cerebellum

Other curiosities about the cerebellum are its diseases. It is known that the most common symptoms of a mild cerebellar disorder are: lack of muscle control and coordination, difficulty walking or hiking, unusual eye movements and headaches (typical headaches).

On the other hand, and since it became evident that the cerebellum was involved in the movement, diseases that could affect this organ began to be studied. Thus, it was seen that most of the important diseases derived from some affectation of the cerebellum were related to movement, although brain hemorrhages, strokes, genetic malformations or tumors of the cerebellum are also contemplated.

Ataxia consists of the loss of muscular coordination and control resulting from a problem with the cerebellum ; in this case what happens is that parts of the cerebellum (nervous system) that control movement have been damaged. Ataxia may be reversible when the cause is treated. In other cases, the cause may disappear on its own.

The causes of damage to the cerebellum (nervous system) are various: exposure to toxins (alcoholic drinks, certain drugs, heavy metals such as mercury and lead, solvents such as those used in paint…), exposure to viruses such as chickenpox or HIV, or strokes.

The hypotonia consists of the decrease of muscle tone and its consequent limp and flaccid state . This state in itself is not overly worrisome – unless it is in infants or young children – but is often the symptom of another underlying disease.

4. Their concentration of neurons is high

5. There are cases of people without cerebellum

After this detailed description of the functions of the cerebellum, it is hard to believe that a human being can live without this organ. However, there are studies that document the existence of people who were born without a cerebellum.

Moreover, there are almost a few cases of adults without a cerebellum recorded in the world, that is, who were born without a cerebellum and did not die of premature death. This phenomenon shows the survival and the adaptive plastic capacity of the human brain to the environment that surrounds it.

How to maintain a healthy cerebellum

Maintaining good health in the body is key to enjoying a quality of life. And with this goes the intrinsic care of our head and a healthy cerebellum.

For example, avoid the risk of cardiovascular accidents by quitting smoking and practicing physical exercise, limit alcohol consumption (it damages the cerebellum), protect the head physically (and more so if we are exposed to accidents) or avoid handling lead (as it can chronically poison the cerebellum).