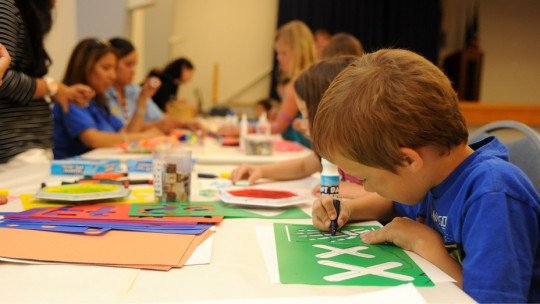 Probably most of us have done some kind of craft at some point, especially during childhood . And it is possible that we remember that moment with a certain affection, having been an activity different from the usual and resulting in an elaboration made by ourselves.

These elaborations are not only playful: they allow us to connect with the different elements we use and with the people with whom we make them, they make us organize ourselves and promote creativity and the development of fine motor skills. In short, it is not a bad idea that if we have children in our care, we propose them from time to time to make some kind of craft, since it means promoting different aspects at the same time as a possible entertainment and communication channel. That is why in this article we are going to offer indications to make different crafts for children .

Crafts for children: a selection

Below we indicate a series of nine crafts for children that can be made with your help in a fun and enjoyable way, both when making them and when enjoying the product made. All of them have been obtained from different books, websites and tutorials.

When we talk about making handicrafts we usually think about making a specific final product, with a specific or merely decorative function. However, the truth is that we can also make materials that children use for fun . An example is plasteline, which will be used both to make a craft and to awaken and stimulate future experimentation at the culinary level.

It will be enough to mix flour, water, salt, oil and some food coloring in a mold to give it color. Approximately three cups of flour, one cup of salt, one cup of water and two tablespoons of oil would be a good ratio.

Although it is possible to colour it with gouache, we recommend the use of food colouring since with them we can obtain a plasticine that would not be toxic if ingested . It is the proportions that will determine the properties of this plasticine. This plasticine is going to be quite durable, and will allow us to make small crafts with our children.

One possible manual that can be useful to us also when learning the hours and the operation of a clock is, precisely, to elaborate a wall clock. To make it, all we need is a plastic plate, a marker, two dozen post-its, two strips of cardboard and a pin .

To begin with, cut out two rectangles of cardboard one being larger than the other, which will be the future hands of the clock. Nail them to the exact center of the plate (calculate where it is before with a ruler) with a pin. After that, paint each of the hours on a post-it and then place it in order on the plate. If you want to make it more educational, you can put the minutes that would correspond to each of the numbers of the hour (ie, one corresponds to five minutes, two to ten …) and put them before the number of the hour itself.

A very simple type of craft that can be made tremendously original and fun. It is based on impregnating the child’s hands or feet (and ours, if we do something collaborative) and creating some kind of composition on a sheet of paper . Later it is possible to add to the handprint different incorporations, being able for example to make trees or animals.

Probably one of the most typical and simple crafts, but equally entertaining. All we need is a packet of macaroni, paint and yarn. The child can paint each one of the macaroni that will be part of the necklace in the way he wants, and will insert them in a thread . In case we want to, we can add some other kind of element. Once finished, it will be necessary to make a knot to close it.

Cardboard, glue, tape, scissors, paper and markers are the materials needed to make a simple version of paper puppets.

First we will take a piece of paper and fold it in half, and then we will stick it with tape. Fold the ends back in, halfway through the folded sheet. From the center where we join both ends, we fold again in the opposite direction. We can now open both ends and put our hand through it , so that it is possible to open and close the proto-puppet as if it were a mouth.

From now on, the only thing left to do is to give shape to the creature or being we want to build, by gluing coloured cards and other elements together. Thus, we will glue on the internal part of the cardboard of a specific color (for example pink). We can cut out a tongue from the cardboard to be able to add it and make the puppet more fun. In the rest of the faces we can paste cardboard of another and other colors, and even draw elements like circles, feather marks or warts (it depends on the animal or being that we do).

We will also have to cut out two circles of cardboard that will be the eyes of our creature, which we will decorate as we like. If we make several different puppets, we can even make a mini theatrical performance.

Another handicraft that stands out for having some practical use is the elaboration of one or several notebooks. To do this we only need sheets of paper and glue , although we can also use some cardboard and markers.

The procedure is relatively simple: take a sheet of paper and fold it in half, and then fold it in half again but in the opposite direction. With these folds made and marked , we’ll unfold the paper and see how we have a total of four folds, which we’ll cut out.

Each of these strips of paper we will fold in half and continue to fold in the same direction twice more. We will continue to glue the ends of the strips together, until we form a long turn of paper with numerous folds. Close the folds until you get a strip similar to an accordion. We will glue the folds only in one of the directions, obtaining with this a small notebook. We only need to make the cover.

To do this, we will take a cardboard, which we will fold in half in both length and width. We’ll cut one of them out. In this one we will mark the shortest side of the sheet. Fold it without reaching the mark, and do the same on the other side. We fold in the other direction, leaving a small space. When we have done this, we have the cover almost finished . Putting the notebook inside we can fold the ends inwards and stick the first and last daughters of the notebook on both sides to them. Now we have our notebook, and all we have left to do is decorate it to our liking.

Another very simple craft is the making of cardboard masks. Cardboard, scissors, cardboard, markers, a rubber band and a lot of imagination will be enough. We can download some kind of concrete model to use as a template .

The first thing to do is to measure the approximate size of the head and transfer this size to the cardboard. We will have to measure approximately the distance between the eyes of the person who is going to carry it and use it to generate two holes through which it can be seen.

The next thing is to give the card the desired shape, by cutting out the shape we want (for example the shape of a dinosaur’s head or a character’s head/helmet). With the help of cardboard and markers, we will finish decorating it.

Finally it will also be necessary to make two small holes in the ends of the mask. We will cut a plastic eraser in order to obtain a single strip , and tie the ends in these holes.

This last craft that we are going to propose is also quite simple. The basic and main element is a T-shirt, preferably plain, in one colour. From here we can use different paints such as gouache, in order to give it the personality we want. Also we can set it in a certain theme , like nature or the beach.

Making paper flowers is a relatively easy thing to do. For this we will need some kind of paper, such as tissue paper or crepe, although we can also use coloured cardboard. In this case we are going to make some roses.

To start we will cut the paper into rectangular strips, and proceed to roll them up on themselves forming a small cone and gluing the end to make it fixed. We will do the same with strips of different sizes, introducing some cones inside others and gluing them.

After this, we can proceed to insert it in a long stick, which we will later paint green, and we can also cut out in green cardboard one or more leaves for the flower, which we will hook on the stick. If we have a polyspan sphere and we make many roses, we could even stick the roses in it and form a bouquet (which we would wrap with paper suitable for this).