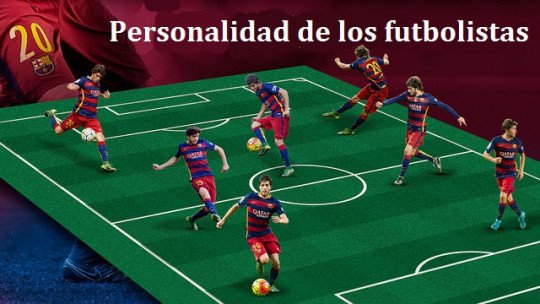 The king of all games is undoubtedly football.

It is a practice as human and significant in our time as few sociological phenomena can be, since it encompasses the different fields of human nature and is capable of calling upon the globality of the human being in its different levels of consciousness and expression. Its practice knows no boundaries as it is practiced in the five continents making the whole world revolve around the ball.

Football: a social… and psychological phenomenon

Both success and failure of a player come from a combination of physical, psychological and technical conditional abilities . For this reason and due to the global relevance of this sport, it is necessary to study these factors that affect the performance of the sportsman, positioning the study of the personality of the footballer as one of the most determining factors for sporting success, being of great use since it is a territory in which behaviours are going to depend more on the personality traits of the players than on their environment.

The personality of footballers

Knowledge of the football player’s personality, according to the position he holds could help improve the performance of the team in general, and the player could be selected for each specific position taking into account not only his physical abilities but also his personality traits that will allow a given player to function better in one position and not in another.

But to be able to talk about personality in sport and in football in particular, it is necessary to make a general description of what this construct we call personality is .

Position in the field (demarcation) and personality: is there a correlation?

One of the fundamental characteristics of this sport is that each player plays a tactical position on the pitch , in which four main categories are identified: the goalkeepers , whose function is to prevent goals from being scored; the strikers , to score goals; the defenders to defend the danger zone and the midfielders who strategically handle the ball in the middle of the field generating the plays aimed at scoring goals.

These four categories are also characterized by having their own particular personality styles according to a series of stable response dispositions that are traits and that are defined as the overall tendencies that each particular player has to emit one or another type of response that determines his or her behavior and characteristic thoughts. That is, each player, depending on his or her personality traits, would be predisposed to respond in the same or similar way to different types of stimuli.

For this reason, the concern arises not only to know the general profile of the football player, but also the individual differences in personality according to the position that each player plays within the field as this would help the coach to his best position within the field; take into account the tolerance to frustration of their goalkeepers, resistance of the goalkeeper to the pressure of penalties, aggressiveness of defenders and emotional stability to see how they influence each other within the same team, etc. General personality traits of a footballer

There are individual differences where the practice of sports is related to a certain number of personality traits, especially in traits such as extraversion, emotional stability and responsibility, these being the traits most associated with sports such as football, although not the only ones, as we will see below.

Therefore, footballers in general are balanced, extraverted, emotionally stable, dominant, aggressive, competitive and ambitious. They are geared towards achievement and team cohesion, active and with few depressive manifestations (Pascual, 1989).

More attributes and features of footballers

Footballers also possess defensive and adaptive strategies in behavioural terms, which defines them as players who are characterised by a great ability to perceive situations favourably and with a high attention span, according to Apitzsch (1994).

The image they give to others is of highly narcissistic and self-centered people (Elman and McKelvie, 2003).

They have high scores on the factors of radicalism, intelligence and control. (O’Connor and Webb, 1976)

Footballers are presented as self-sufficient as they tend to seek to build their own future and have it depend on them alone, individualistic and supportive, as well as tense, energetic, impatient, restless and reactive. (Marrero, Martin-Albo and Núñez, 2000).

Football players in general belong to the Conformism scale, which indicates that they conform to authority, respect it and abide by its rules. (García-Naveira, 2008; Aparicio and Sánchez-López, 2000).

Football players in general are dominant, manipulative, aggressive, competitive and ambitious in their social relations (Apitzsch, 1994; García, 2004 and García-Naveira, 2008).

These players move and act upon individual interests such as motivation to improve a personal skill, to be recognized as the best in their position, to be a starter, among others; and group motivations such as winning a cup or championship (Díaz-Morales and García-Naveira, 2001). They are demanding with themselves and brilliant, and keep their self-esteem high so that the environment will comfort them.

This indicates that football players tend to meet their own needs but take others into account when making decisions about group goals.

Although football players, being group sportsmen, are more dependent on their own teammates, they need to turn to others to seek external stimulation , constant attention from the other team members, they possess confidence towards the other, self-control and social responsibility at a higher level than individual sportsmen Bara et al. (2004).

As we have seen, football players have a characteristic style of personality, but differences are also established according to the location and the role that each player plays on the field (Goalkeeper, Defense, Midfielder and Forward) according to the tactical position they play within the team (Millon 2001).

Personality differences between footballers according to their position on the pitch

They are characterized by their intuition and because their knowledge is derived from the concrete, relying more on direct or observable experience than on the players who occupy the other positions.

They are players who are very confident, believe they are talented, competent and very self-centred.

Goalkeepers are the players most capable of taking risks and are highly dissatisfied with predictable situations .

They are very creative, communicative, dominant and aggressive and are always looking for stimulation and attention. They are friendly and bright but also demanding and prefer to satisfy their personal needs first, rather than those of others. They are characterized because they are reflexive, tend to process knowledge to a greater extent through logic and analysis and are able to make decisions based on their judgment and on their direct and observable experience (intuition). (García Narváez, 2010).

They are the most likeable of the team (concordance) and those who establish the strongest emotional bonds with the other players and tend to hide their negative feelings.

They are intuitive, seeking the abstract and the speculative and making decisions based on their own emotional reactions and guided by their personal values. They are characterized by being the most intuitive players. They are confident and very competent and talented .

They are players who seek their stimulation from others and are motivated to satisfy the needs of others first and not those of themselves.

They are placed in the scale of submission which indicates that they relate in a submissive way to others and conform to the norms held by others . They are characterized by being the most systematic players. They are predictable, organized, perfectionist and efficient , capable of adapting new knowledge to existing knowledge, thus looking for safe ways to generate productive moves and stick to them without going too far out of that proven pattern. (Pérez. M, Navarro. R, Navarro. R, Ruiz. J, Brito. E, Navarro. M. 2004).

They are receptive, dominant and socially aggressive, ambitious and obstinate (control polarity) . These are the players that act more independently and less conformist with the predictable, besides not abiding by common or traditional rules, assuming the risks (discrepancy).

Although they are socially friendly and establish good ties with other players and strong loyalties, they are the least motivated to meet the demands of others first.

They lean towards the scale of Affectivity, which describes them as players who make decisions based on their own emotional reactions and guided by their personal values. For all the above reasons, an integrative model is needed that takes into account variables that are stable over time, such as personality traits or styles, and other more changing variables such as goals, motivations and cognitive styles.