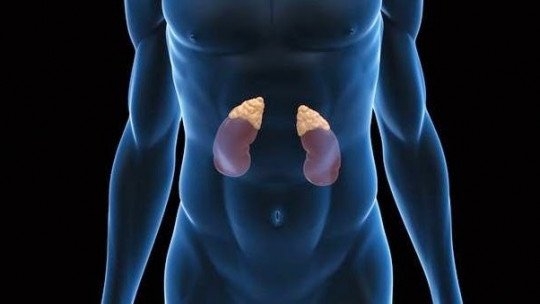 Our endocrine system is formed by a group of organs and tissues that are in charge of regulating vital functions for our organism through the release of different hormones.

Aspects as important for survival as the proper functioning of the metabolism or the immune system depend largely on the adrenal glands, two small organs responsible for secreting hormones such as cortisol, adrenaline or noradrenaline into the bloodstream.

In this article we explain what the adrenal glands are , what their structure is, what functions they perform in our body and what are the most common diseases and disorders related to a malfunctioning of these glands.

The adrenal glands are small, triangular-shaped endocrine organs located on top of both kidneys . These glands are responsible for producing hormones that help regulate metabolism, the immune system, blood pressure, stress response, and other essential functions.

The adrenal cortex and adrenal medulla are wrapped in a fatty capsule that forms a protective layer around the adrenal gland. The adrenal cortex is essential to our survival; if it were to stop functioning properly, collapse and death are very likely to occur, as it controls the basic metabolic processes for life.

The adrenal medulla, which is located within the adrenal cortex in the center of the gland, secretes “stress hormones” such as adrenaline and noradrenaline. Let’s take a closer look at what these and other hormones produced in the adrenal glands are and what their functions are.

The role of the adrenal glands in our body is to release certain hormones directly into the bloodstream , many of which have to do with the way the body responds to stress, and as we discussed above, some are vital for survival.

Cortisol is a glucocorticoid hormone produced by the fasciculated area that plays several important roles in the body . It helps control the body’s use of fats, proteins, and carbohydrates; suppresses inflammation; regulates blood pressure; increases blood sugar; and may also decrease bone formation. This hormone also controls the sleep-wake cycle and is released in times of stress to help the body get a boost of energy and better manage an emergency situation.

The hormone ACTH then stimulates the adrenal glands to produce and release cortisol into the blood (if there is too much or too little cortisol, these glands respectively change the amount of CRH and ACTH that is released, in what is known as a negative feedback loop). Overproduction of cortisol can occur from nodules in the adrenal gland or overproduction of ACTH from a tumor in the pituitary gland or other source.

Aldosterone is a mineralocorticoid hormone produced by the glomerular zone of the adrenal cortex and plays a central role in the regulation of blood pressure and certain electrolytes (sodium and potassium).

This hormone sends signals to the kidneys, which causes the kidneys to absorb more sodium into the bloodstream and release potassium into the urine. This means that aldosterone also helps regulate the pH of the blood by controlling the levels of electrolytes in the blood.

DHEA and androgenic steroids are produced by the reticular zone of the adrenal cortex , and are precursor hormones that are converted in the ovaries into female hormones (estrogens) and in the testicles into male hormones (androgens).

However, the ovaries and testes produce estrogen and androgen in much greater quantities.

Among other functions, these hormones are able to increase the heart rate and strength of heart contractions, increase blood flow to the muscles and brain, relax the smooth muscles of the airways, and aid in glucose (sugar) metabolism.

They also control the compression of blood vessels (vasoconstriction), which helps maintain blood pressure and increase it in response to stress. Like other hormones produced by the adrenal glands, adrenaline and noradrenaline are often activated in situations of physical and emotional stress when the body needs extra resources and energy to withstand unusual stress.

The adrenal glands are an intricate part of the hypothalamic-pituitary-adrenal axis . The hypothalamus acts as the body’s thermostat and detects most of the important physiological elements involved in homeostasis, sending signals to correct perceived harmful variations.

It connects directly to the pituitary gland, which essentially picks up the commands from the hypothalamus and sends signals to various organs and glands, including the adrenal glands, to carry out these commands.

A wide range of hormones, including estrogen, adrenaline, and cortisol, are produced by the adrenal glands. One of cortisol’s main activities is to increase the glucose available to the nervous system by breaking down proteins and fats into glucose in the liver, helping to block glucose absorption by tissues other than the central nervous system.

Cortisol also has powerful anti-inflammatory and anti-allergic actions, and decreases the activities of the immune system to reduce inflammatory conditions.

Another of the most important functions of the adrenal glands is the fight or flight response. When a person is stressed or scared, the adrenal gland releases a stream of hormones , such as adrenaline and cortisol, and these increase the heart rate, raise blood pressure, increase energy supplies, sharpen concentration, and slow down other body processes so that the body can escape or fight off a threat.

However, an excessive response to stress can be counterproductive. Excessive exposure to adrenal gland stress hormones can cause anxiety, depression, digestive problems, headaches, heart disease, sleep problems, weight gain, and impaired memory and concentration. The following are the most common disorders associated with excess adrenal hormone production.

The two most common ways the adrenal glands cause health problems are by producing too little or too much of certain hormones, which leads to hormonal imbalances.

These abnormalities of adrenal function can be caused by various diseases of the adrenal or pituitary glands. Let us look at the main disorders related to abnormal functioning of the adrenal glands .

Causes of primary adrenal failure may include autoimmune disorders, fungal and other infections, cancer (rarely), and genetic factors. Although adrenal insufficiency usually develops over time, it can also suddenly appear as acute adrenal failure (adrenal crisis). It has similar symptoms, but the consequences are more severe, and include seizures and coma that are life-threatening.

Adrenal insufficiency may also result from a genetic disorder called congenital adrenal hyperplasia. Children born with this disease are missing an essential enzyme needed to make cortisol, aldosterone, or both. At the same time, they often experience an excess of androgens, which can lead to male characteristics in girls and early puberty in boys.

Congenital adrenal hyperplasia can go undiagnosed for years, depending on the severity of the enzyme deficiency. In more severe cases, babies may suffer from ambiguous genitalia, dehydration, vomiting, and lack of growth.

Cushing’s syndrome is caused by excess production of cortisol in the adrenal glands.

Symptoms may include weight gain and fat deposits in certain areas of the body, such as the face, under the back of the neck (called a buffalo hump) and on the abdomen; thinning of the arms and legs; purple stretch marks on the abdomen; facial hair; fatigue; muscle weakness; easily bruised skin; high blood pressure; diabetes; and other health problems.

Overproduction of cortisol can also be triggered by overproduction of adrenocorticotropic hormone (ACTH), by a benign tumor in the pituitary gland, or by a tumor elsewhere in the body. This is known as Cushing’s disease. Another common cause of Cushing syndrome is long-term overuse of external steroids, such as prednisone or dexamethasone, which are prescribed to treat many autoimmune or inflammatory diseases.

Hyperaldosteronism is a disorder caused by overproduction of aldosterone in one or both adrenal glands.

This causes an increase in blood pressure that often requires many medications in order to be controlled. Some people may develop low levels of potassium in the blood, which can cause muscle aches, weakness, and spasms.

Pheochromocytoma is a tumor that produces excess adrenaline or noradrenaline production in the adrenal medulla. Sometimes, neural crest tissue (a structure of few cells that exists transiently in early stages of embryonic development), which has a tissue similar to the adrenal medulla, can be the cause of the overproduction of these hormones, which is known as paraganglioma.

Pheochromocytomas can cause persistent or sporadic high blood pressure that may be difficult to control with common medications. Other symptoms include: headaches, sweating, tremors, anxiety, and rapid heartbeat. Some people are genetically predisposed to develop this type of tumor.