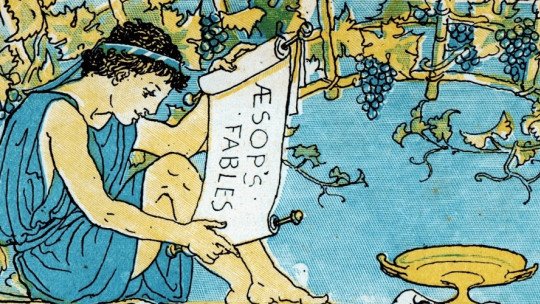 It is more than likely that throughout our lives we have heard or been told a fable.

These types of stories are stories similar to tales generally starring animals, gods or inanimate objects but which in the narrative have characteristics that are specific to human beings, and which are characterized by a final teaching or moral.

One of the best known authors of this type of narrative is Aesop, an ancient Greek slave from ancient Greece to whom a large part of the most popular and common fables in our culture are attributed, which have sometimes been reinterpreted or versioned by other great fable writers. Aesop has hundreds of stories to his credit, of which we will see several throughout this article: a selection of Aesop’s fables, with explanation .

Next we will review several Aesop’s fables, as well as the morals and lessons learned from them. Among them we will see both some of the most common and others less known, but equally relevant.

Although Aesop also has several fables centered on gods, we will only see one as an example and will mostly be played by animals .

1. The hare and the tortoise

“One day a proud and swift hare saw a tortoise walking along the road and approached him. The hare began to make fun of the other animal’s slowness and the length of its legs. However, the tortoise replied that she was sure that despite the great speed of the hare she was capable of winning it in a race.

The hare, certain of his victory and considering the challenge impossible to lose, accepted. Both asked the fox to point out the goal, which she accepted, as well as the raven to play the judge.

When the day of the competition arrived, the hare and the tortoise started at the same time. The tortoise advanced without stopping, but slowly.

The hare was very fast, and seeing that it was taking great advantage of the tortoise, he decided to stop and rest from time to time. But on one occasion the hare fell asleep. The tortoise, little by little, continued to advance.

When the hare woke up, he found that the tortoise was about to cross the finish line. Although he ran, it was too late and the tortoise finally won the race.

This fable teaches us that hard work, perseverance, constancy and effort will lead us to our goals , even if it is little by little, if we do not give up. It also allows us to see how arrogance, lack of constancy and excessive self-confidence can lead us to miss opportunities and not reach our goals.

2. The cicada and the ant

“It was a hot summer. A cicada, protected from the sun by the shade of a tree and enjoying the moment without any intention of getting to work, sang and sang continuously. As she watched her neighbor, a hard-working ant, was working hard to bring food to her home.

The cicada offered her to sing and rest, which the ant indicated she should stop being idle and start collecting food. The cicada ignored her advice.

Months later a cold winter arrived, which surprised the cicada with nothing to eat and nowhere to go. Desperate, the ant went to its neighbor for help. However, the ant answered by asking what it had done during the summer. The cicada told it to sing, to which the ant replied that it should dance now because when it could, it did nothing to avoid the situation, and closed the door, leaving the cicada outside.

Although later reformulated by La Fontaine, this well-known fable is also considered or attributed to Aesop. The moral is clear: we must strive and work hard to subsist and manage to lead a dignified life that will allow us to survive, while laziness and lack of action can be costly. We must be constant, persevering and foresighted.

3. The wolf and the lamb

“There was once a wolf who saw a lamb on the bank of a river and wanted to eat it by offering a simple but plausible pretext. Despite being upstream, he accused him of not letting him drink when he stirred the water. The lamb replied that since the wolf was upstream and the wolf downstream it was not possible that this would be the case.

Seeing the failure, the wolf accused the lamb of having insulted his parents the year before, to which the lamb replied that a year ago he had not yet been born. The wolf then said that although the lamb was very well justified, he would not let it go and would not stop eating it.

This fable teaches us that often those who want to harm us will not stop regardless of our arguments or whether it is fair or not.

4. The pigeon and the ant

“Once there was an ant that, thirsty, came to a river to drink. However, once there it was swept away by the current. She was drowning when a dove, perched on a nearby tree branch, observed the scene and rushed to save her.

After he got her to safety, the grateful ant promised that one day he would return the favor if he could despite her tiny size.

Time passed and one day a hunter came to the area. Seeing the pigeon in the lodge, he prepared his weapon and set out to hunt it.

However, the ant, which was nearby, saw the scene and rushed to fulfill its promise. The ant stung the hunter on the heel, and in the face of the pain he dropped his weapon. The pigeon took the opportunity to fly away, saving his life.

This fable is a demonstration of the importance of generosity and how every good deed has its reward in the end.

5. The bat and the weasel

“A bat fell to the ground and was caught by a weasel. Seeing that he was about to die, he begged the bat for his life. The weasel told him that he could not let go because he was born an enemy of the birds. The bat replied that it was not a bird but a mouse, and so escaped with great cunning.

Some time later he fell into the hands of a second weasel, to whom he begged not to be devoured. The weasel said that he hated mice, so he could not let him go. The bat, however, replied that he was not a mouse but a bird, so he managed to get free again.

This little fable of Aesop has as a moral that we must be able to adapt to situations quickly and flexibly , something that will undoubtedly allow us to thrive and survive.

6. The donkey and the fox meet the lion

“The donkey and the fox, having joined together for their mutual protection, went out for a day’s hunting. They did not walk far when they found a lion. The fox, sure of the immediate danger, approached the lion and promised to capture the donkey if he gave his word not to harm her.

Then, affirming to the donkey that he would not be mistreated, he took him to a deep ditch telling him to stay there. The lion, seeing that the donkey was already secured, immediately grabbed the fox, and then attacked the donkey at will.

This fable teaches us as a moral that we should never betray our friends for fear of our enemies , since in the end you will also be betrayed.

“A hind that lacked an eye was grazing by the seashore, turning her eye to the land to watch the coming of the hunters and giving the sea the side that lacked the eye, for from there she expected no danger.

But it turns out that some people were sailing around this place, and when they saw the doe, they shot it down with their darts. And the dying hind said to herself, ‘Woe is me! I watched the land, which I thought was full of dangers, and the sea, which I considered a refuge, was much more fatal to me.

This fable teaches us that we should never underestimate or overestimate things or take them for granted, but that we should analyse all the options and their positive and negative aspects in a realistic way, without letting ourselves be biased by subjectivity.

8. The dog and its reflection in the river

“A dog waded through a river with a piece of meat in its mouth. He saw his own reflection in the river water and believed that that reflection was actually another dog carrying a larger piece of meat than his own. And wishing to take over the piece of meat, he let go of his own to snatch the piece from his compadre.

But the result was that he was left without his own and without someone else’s: this one because it did not exist, it was only a reflection, and the other, the true one, because it was carried away by the current.

This fable from Aesop teaches us the importance of not coveting or focusing on obtaining or usurping the goods or achievements of others , since this can make us lose what we have achieved on our own.

9. The fox and the grapes

“There was a fox who was very hungry, and when she saw some delicious bunches of grapes hanging from a vine, she wanted to catch them with her mouth. But not being able to reach them, she walked away, saying: -I don’t even really like them, they are too green

This little story lets us see how often when we give up on something we want we blame it on the said something or on others. The moral is precisely that we should not pass the blame for not achieving what we want on to others .

10. The wolf in sheep’s clothing

“One day a wolf thought to change his appearance in order to facilitate the hunt for food. He got into a sheepskin and then went to graze with the flock, so that he misled the shepherd. When evening came, he was taken along with the rest of the flock to a fence, remaining inside with his desired prey.

However, at night the shepherd came in looking for meat for the next day. He took the wolf, believing him to be a lamb, and slaughtered him.

The moral that is extracted from this fable tells us that deceiving others does not generate benefits but will end up causing us damages , greater the greater the deception.

“Borreas and Helios fought over who was stronger, deciding that the victory would be given to the one who managed to remove the clothes of a walker from the area. Borreas blew and blew with great force to take them off. However, in the face of the strong wind, the man grabbed his clothes with increasing force, and even went so far as to put on a thicker garment because of the cold.

Tired, Borreas left the shift to Helios. At first he glowed moderately, so that the man stopped being cold and began to take off his thick garment. Little by little, Helios got warmer, until finally the man decided to take his clothes off for a bath.

This is one of Aesop’s fables starring gods and human beings, and its moral is that it is easier and more useful to convince someone of something (as Helios did by allowing the temperature to rise little by little) than to try to achieve it with force (as Boreaeus tried with his wind).