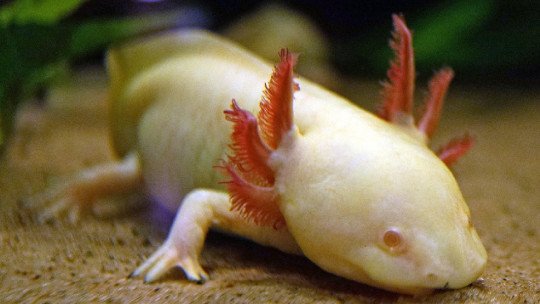 In the immensity of biodiversity that exists on the planet we can find unique qualities, such as mammals of the order of monotremata. These animals stand out for retaining reptilian qualities, such as reproduction by means of eggs, or the fact of having a sewer, a single hole for the exit of the digestive, urinary and reproductive tracts. But another even more striking example is the Mexican axolotl or axolotl .

It is an amphibian that has an impressive feature: the ability to regenerate parts of its body is highly effective. They easily recover from an amputated limb and even repair severely damaged vital organs, including the brain, without any problems. In a matter of months, these wounds disappear completely, without leaving a scar.

The axolotl, or Ambystoma mexicanum , is an amphibian of the caudate order (in other words, of the family of salamanders and newts), which has the peculiarity of retaining its larval form until it reaches adulthood, a characteristic known as neoteny. This means that it maintains the dorsal fin that runs all over its body and has external gills , which form a crown on its head. By maintaining these qualities, it needs to live permanently in the water, unlike other congeners.

Just because its larval qualities don’t disappear doesn’t mean it can’t mature. If an axolotl is subjected to high levels of stress (such as sudden temperature changes), it can undergo metamorphosis , becoming a kind of terrestrial salamander, although these are very rare cases.

The regeneration of body parts, a surprising attribute

But what has attracted the most attention from the scientific community is the high capacity for regeneration that the garlic has. It’s probably the largest on the planet. In fact, entire portions of the brain can regenerate without leaving any after-effects. Knowing the cellular mechanisms used for the complete repair of damaged tissues is a mystery that could have applications in current medicine .

The location of this amphibian is very limited, since currently only inhabits the Xochimilco lake in Mexico City . In the past it was spread throughout the region, but water pollution has managed to reduce the number of this species, which is very sensitive to environmental changes. It is now included in the list of endangered animals and is rarely seen in the wild.

For this reason, the axolotl is bred in captivity to preserve its existence . The truth is that it has adapted well to this kind of life, without presenting problems to reproduce. Another reason that makes it a good model for laboratory use.

Due to its regeneration capacity, the axolotl is subject to study in order to discover the cellular mechanisms that are used when developing a lost tissue again, including the repair of vital organs . In addition, they are animals whose bodies accept transplants easily, which is unusual.

But it is also a model of embryonic development. This is due to another characteristic they offer, and that is that their embryo is transparent. In addition to their ability to reproduce in captivity, the eggs they lay allow us to observe, through a microscope, the development of a new organism in all its splendour.

Their adaptation to life in captivity has also had an effect on their genetics. The natural skin colors of the garlic are black and brown , but in breeding have been obtained from different colors, such as yellow and even albinos, ie without pigmentation. Possibly, if you have seen some pictures of this amphibian, it will have been of the last type.

Based on their research, part of the scientific community believes that focusing studies on discovering how they regenerate their bodies can be extrapolated to humans in the future. The knowledge of these cellular mechanisms could help make the possibility of recovering a lost limb or fighting neurodegenerative diseases such as Alzheimer’s or Parkinson’s a reality.

No wonder governments like the United States invest millions in garlic research, hoping it will allow tissue regeneration in humans. In your particular case, for the recovery of serious injuries to your soldiers.

So far, the most that has been achieved in terms of regeneration in humans is the recovery of the tip of a finger. There is a long way to go to repair an entire limb, including bone and muscle.

Despite all this, the axolotl is an animal that is in danger of extinction because it lives in a very specific area of Central America and because of the levels of pollution found there. Being an aquatic organism, it is very sensitive to the poisoning of these places. This must be added to its capture and breeding to market it as a domestic pet, and in some cases, to be an ingredient in recipes.