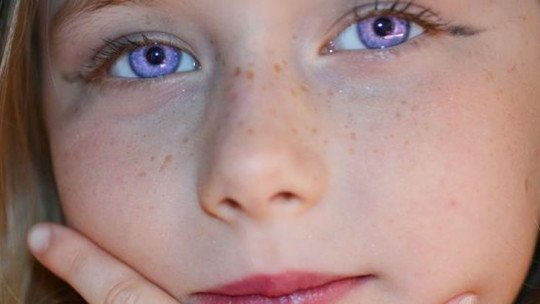 You may not have heard much about Alexandria syndrome, also known as Genesis of Alexandria , a rare condition that is attributed with the ability to cause a person to develop purple eyes, among other symptoms.

Violet eyes are probably very attractive, but people who would have them because of this syndrome also have very strange biological characteristics, supposedly because of a mutation.The truth is that there is very little information about this medical condition, so it seems more like a myth. In this article we will talk about the characteristics of Alexandria syndrome and whether or not it is credible .

What is Alexandria Syndrome?

Theoretically, Alexandria syndrome is a consequence of a genetic mutation that turns people into human beings with extraordinary qualities.

As a result of this mutation, the eyes would become purple, the skin extremely light (which curiously does not burn with exposure to the sun) and the hair would become dark brown, although they have no body hair. The curious thing about this case is that these people are attributed with unique abilities , because women do not have a menstrual cycle but can have children, their immune systems are insurmountable, their well-proportioned bodies never gain weight and on top of that they look 5 or 10 years younger.

Certainly, this story does not seem very true , but it seems less true when one learns that the life expectancy of these people would be 120-150 years. The fact is that most of the myths about this phenomenon have to do with their evolution.

How does this supposed condition develop?

Apparently people with Alexandria syndrome are born with blue eyes , but after a while (at six months) and due to the genetic mutation, they turn into violets. This condition usually occurs mainly in Caucasians. During puberty, the tone becomes darker. But the color of the eyes, although it can be striking, is not the most disturbing part of this story. For example, that despite the pale skin tone, these people do not get sunburned.

Furthermore, it turns out that thanks to a genetic mutation, aging would stop around the age of 50, and supposedly it is not from the age of 100 that these individuals begin to look older.

What is the origin of this peculiar phenomenon?

The name of this disorder appears in the 14th century in Northern Europe. According to the story, the term originated from the case of Alexandria Augustine, a woman who was born in London in 1329. At the time of her birth, little Alexandria had blue eyes, but the colour gradually changed to violet . A priest of the time claimed that this strange case was not the work of the devil (thank goodness), but that he knew of a similar case from Egypt, and Alexandria would have all the symptoms described above.

This story might seem more a matter of superstition and fears about witchcraft still alive today. Some proponents of the existence of this syndrome believe that the American actress Elizabeth Taylor presented this disorder . It turns out that Taylor’s eyes were dark blue, and depending on how the light impinged on them, they looked purple.

To reinforce their claims, many people argue that there are mutations that produce the opposite effect, i.e. that children age rapidly: this is what is known as “butterfly children”, who are characterised by fragile skin and whose life expectancy is shortened by 30-40 years. In fact, this hereditary disease of poor prognosis is called epidermolysis bullosa and is very serious.

The most severe form of this disorder is known as dystrophic epidermolysis bullosa , and is caused by mutations in the gene responsible for collagen VII, a protein whose function is to give firmness and integrity to different tissues of the body, including the skin. The case of this disease is known and has been confirmed by science. Since there is a mutation that causes premature aging and a shorter lifespan, proponents of Alexandria syndrome argue that it is quite reasonable to expect that a mutation with the opposite effects exists.

Alexandria syndrome: is it real or not?

Although this last statement may have some logic, the symptoms of this supposed disorder are too extravagant to be even possible, let alone credible.

Some things don’t fit. For example, no matter how much a genetic mutation is present, there is nothing that can explain why women with Alexandria syndrome can have children without having a period . Although there are animals that can, it would take much more than a single mutation to readjust the genes in humans to do so.

Furthermore, according to existing records, the record for human longevity is 122 years . Therefore, the claim that people with the Genesis of Alexandria can live to 150 years of age is unfounded.Everything in this story is unfounded. So we can say that the Alexandria syndrome does not exist.