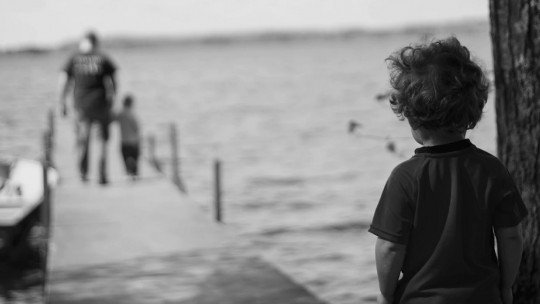 We’re all afraid of something. Fear is one of the most basic and powerful primary emotions that exist, as well as one of the most adaptive. Fear allows us to avoid stimuli that can generate some kind of damage or harm, activating our systems to give a rapid response to escape or attack.

Most of our fears are learned from experience, but are they all? Not really. So, are there innate fears? In this article we are going to talk about it.

There are a large number of classifications of the different existing fears, one of which divides them into two large groups: innate and acquired.

Acquired fears are those that have been learned throughout life, and their emergence is due to the experience of situations that have caused a stimulus to become aversive or frightening.

With regard to the type of fear that we are dealing with in this article, innate fear, would be defined as the sensation of fear that is not born from experience but comes from the genetic inheritance of our ancestors, this fear being something unconscious and common in the great majority of human beings.

In addition to this difference, another has been observed that may have useful implications at the treatment level: innate fears and conditioned fears are partly processed by different neural mechanisms. These differences can even be observed between different types of element to be feared (e.g., predators).

The reason for the appearance of innate fears is the simple fact that they are linked to the survival of the species, being also a product of natural selection: those who at a particular time were predisposed to be afraid of certain stimuli and avoided them survived more easily and managed to transmit their genes.

Likewise, innate fears are often identified with evolutionary ones in another sense: those that arise throughout the evolutionary development of each subject, appearing and sometimes disappearing as we mature. In this sense, it is true that a large part of the fears we have in childhood are innate (although they are affected by learning), but nevertheless it must be taken into account that most of the fears we have throughout life are largely caused by learning or socialization.

For example, the fear of death is something that appears in human beings but is basically a product of cultural learning. The same can be said of the fear of failure, or the fear of fantastic beings. By this we mean that although they are often similar, evolutionary fears are not always innate .

An innate but not unchangeable fear

The fact that innate fears exist does not mean that they cannot vary. Learning is a powerful tool that can make the intensity of the fear felt diminish significantly, and other disturbances can also generate a loss of fear.

This is the case with some mice, which lose their innate fear of cats when infected with the toxoplasma gondii parasite and whose loss of fear remains even when the infection has been cleared. In addition, brain alterations and lesions can alter the ability to feel fear, especially if they affect the limbic system.

The existence of innate fears is visible in different cases that are repeated all over the world throughout our development and without having to go through any kind of damage. In this sense we can see numerous examples, of which we select several below. Most of them appear throughout the development , although some of those that appear in this period are derived either from the direct experience of aversive experiences or from vicarious or cultural learning.

From the moment we are born, we can see how most babies break into tears when they hear a loud noise. This fear is largely due to surprise or the detection of a possible danger, and even in adulthood it causes shocks. It usually appears at birth or in a period between the first two years of life . It is visible in the existence of innate protective reflexes in the face of these sounds, as well as in the fact that we immediately orientate ourselves towards their source.

The fear of the dark is one of the most well known innate fears, as well as one of the easiest to analyze its evolutionary meaning. The human being as a species is essentially diurnal, not possessing great adaptations that allow us to see possible dangers lurking. Interestingly, although innate this fear is detected between two and six years of age.

The fear of falling is another innate fear that is best known, appearing between six months and about the first year of life. This is because we begin to detect depth. Although there may be experiences of falling involved in this fear, the truth is that the organism itself has reflexes that try to avoid them , the most visible example being the so-called Moorish reflex.

Another fear that we might consider innate is the fear of strangers, which also usually appears around the third quarter of life. This fear is not elicited by the presence of an aversive experience that generates its appearance, although education can influence it. Many babies, for example, start crying or stop smiling to see someone they don’t know .

No one teaches us to be afraid of being alone, nor does it have a harmful effect on the body that would make us fear it. However, many children are afraid of being separated from their parents. A fear that usually appears between the ages of two and six.

This fear is usually quite common in childhood and even many adults still have some fear. In this case we are probably dealing with a fear derived from the combination of light and sound of lightning and thunder. It is also something inherited, since throughout our evolution we have needed to take refuge from storms because of their danger.

The fear of beings like spiders and snakes has an evolutionary meaning that makes many people avoid them. It is also observed that in many children appears some fear of small animals during childhood. Likewise, it has been observed that exposed to the image of a possible predator, many animal species react with fear and tend to avoid it even without having had previous experiences with that animal.

However, there is a debate in humans about whether this fear cannot really be a conditioned fear: it has been observed on the other hand that, if we place a baby near animals considered dangerous such as snakes, it probably arouses more curiosity than fear. In this sense the fear could be due to some degree to cultural learning.

Although not as much in humans as in other animal species, some odors can also generate a high level of fear. This is what happens, for example, in the case of mice when they smell the urine of a cat or with other beings when they perceive the smells of their natural predators.