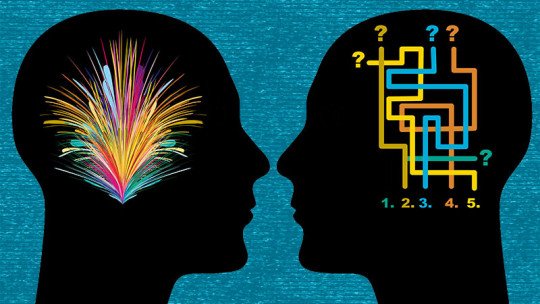 If we were asked to summarize in an adjective something that defines human beings and differentiates them from other animals, we would probably refer to the fact that ours is a rational species .

Unlike the vast majority of life forms, we can think in abstract terms related to language, and thanks to them we are able to create long-term plans, be aware of realities that we have never experienced in the first person, and speculate on how nature works, among many other things.

However, it is also true that emotions have a very important weight in the way we experience things; moods influence the decisions we make, how we order priorities, and even our way of remembering. Which of these two areas of our mental life defines us best?

Are we rational or emotional animals?

What is it that differentiates rationality from the emotional? This simple question may be a subject on which entire books are written, but something that quickly draws attention is that rationality is usually defined in more concrete terms: it is rational the action or thought that is based on reason, which is the field in which the compatibilities and incompatibilities that exist between ideas and concepts are examined on the basis of principles of logic.

In other words, what characterizes rationality is the consistency and solidity of the actions and thoughts that emanate from it. That is why the theory says that something rational can be understood by many people, because the coherence of this set of ideas fitted together is information that can be communicated, as it does not depend on the subjective.

On the other hand, the emotional is something that cannot be expressed in logical terms, and so it remains “locked” in the subjectivity of each person. Art forms can be a way of publicly expressing the nature of the emotions that are felt, but neither the interpretation that each person makes of these artistic works nor the emotions that this experience will evoke are the same as the subjective experiences that the author has wanted to capture.

In short, the fact that the rational is easier to define than the emotional tells us about one of the differences between these two realms: the former works very well on paper and allows certain mental processes to be expressed by making others understand them almost exactly, while emotions are private, they cannot be reproduced through writing.

However, the fact that the realm of the rational can be described more accurately than that of the emotional does not mean that it defines better our way of behaving. In fact, in a way the opposite is true.

As the emotional is so difficult to define, many psychologists prefer to speak, in any case, of “limited rationality” . What we would usually call “emotions” would thus be buried in a pile of tendencies and patterns of behavior that, this time, do have some relatively easy limits to describe: they are everything that is not rational.

Thus, researchers such as Daniel Kahneman or Gerd Gigerenzer have become famous for conducting numerous investigations in which it is proven to what extent rationality is an entelechy and does not represent the way we usually act. Kahneman, in fact, has written one of the most influential books on the subject of limited rationality: Thinking Fast, Thinking Slow, in which he conceptualizes our way of thinking by distinguishing a rational and logical system from an automatic, emotional and fast one.

Heuristics, cognitive biases, all the mental shortcuts we take to make decisions in the shortest time possible and with the limited amount of resources and information we have all this, mixed with emotions, is part of non-rationality , because they are not procedures that can be explained through logic.

However, at the moment of truth, it is non-rationality that is most present in our lives, as individuals and as a species. And, furthermore, many of the clues about the extent to which this is so are very easy to see .

Rationality is the exception: the case of advertising

The existence of advertising gives us a clue about that. 30-second TV spots in which explanations about the technical characteristics of a car are null and void and we can’t even get a good look at what that vehicle looks like can make us want to buy it, investing several salaries in it.

The same applies to all advertising in general; advertising pieces are ways of making something sell without having to communicate in detail the technical (and therefore objective) characteristics of the product. Companies spend too many millions annually on advertising for this communication mechanism not to tell us something about how buyers make decisions, and behavioral economics has been generating a lot of research showing how decision making based on intuition and stereotypes are very common , practically the default buying strategy.

Another way to see the extent of limited rationality is to realize that logic and most notions of mathematics must be learned deliberately, investing time and effort in it. Although it is true that newborns are already capable of thinking in basic mathematical terms, a person can live his whole life perfectly well without knowing what logical fallacies are and constantly falling into them.

It is also known that in certain cultures adults remain in the third stage of cognitive development defined by Jean Piaget, instead of moving on to the fourth and final stage, characterized by the correct use of logic. That is, logical and rational thinking, rather than being an essential characteristic of human beings, is rather a historical product present in some cultures and not in others.

Personally, I believe that the latter is the definitive argument as to why that part of mental life that we can associate with rationality cannot be compared to the domains of emotions, hunches and cognitive shenanigans that we tend to do on a daily basis in order to get out of the way in complex contexts that in theory should be approached through logic. If we have to offer an essentialist definition of what defines the human mind, then rationality as a way of thinking and acting has to be left out, because is the result of a cultural milestone reached through the development of language and writing .

The trap by which we may come to believe that we are rational beings “by nature” is probably that , compared to the rest of life, we are much more logical and prone to systematic reasoning ; however, that does not mean that we think fundamentally from the principles of logic; historically, the cases in which we have done so are exceptions.

The use of reason may have very spectacular results and it is very useful and advisable to use it, but that does not mean that reason itself is not, in itself, something to aspire to, more than something that defines our mental life. If logic is so easy to delimit and define it is precisely because it exists more on paper than in ourselves .