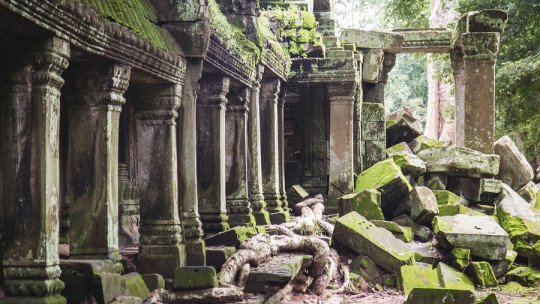 In the area of anxiety disorders, we know that there are many rare phobias; surely, many of them we don’t even know. Perhaps this is the case with the phobia that we will discuss in this article: athephobia, which consists of the phobia of ruins .

Here we will see what it consists of, what its predominant symptoms are, its causes and possible treatments within the framework of the psychotherapy that we can use to combat it.

Athephobia is a specific type of phobia, which consists of an intense, irrational and disproportionate fear of ruins.

When we speak of ruins, we refer to remains of human architecture . That is, to structures that have been partially or totally destroyed over time, as a consequence of depopulation, wars, natural disasters… The ruins do not have to be frightening, even though they may acquire a mysterious or “phantasmagoric” air, especially at night.

In scary, horror or suspense films, for example, ruins are often used as an element to generate some tension in the viewer. If, in addition, the scenes where ruins appear are set at night, this generates more restlessness or fear.

In atrophobia, however, there is this intense fear of them. It is important to remember, in this sense, that phobias are usually generated towards objects or situations that do not have to be scary (or that if they do, they do not generate symptoms as intense as in phobias).

This is precisely why they are phobias, because they are disproportionate fears of a specific object or situation; phobias also generate interference in the life of the individual, and cause discomfort, in addition to other symptoms that we will see throughout the article.

What are the most common symptoms associated with atrophobia, beyond discomfort and interference with daily life? Let’s get to know them.

The main symptom of atrophobia is an intense, irrational and disproportionate fear of ruin. These can be of different types: very old or not so old, big or small…

Fear appears in the presence of the ruins, or in some cases it is enough to imagine them to feel it. This fear, in reality, is a sensation of anxiety and distress generated by the phobic object , and can be of different intensities.

The second typical symptom of specific phobias is avoidance of the object or phobic stimulus . Thus, in the case of atrophobia, one avoids being in contact with ruins, or near them. They also avoid watching them on television, in movies, newspapers…

It may be that the person, instead of avoiding them, “faces them”, resisting seeing them or being close to them, although with a high degree of anxiety.

Psychophysiological symptoms also appear in atrophobia, as with most phobias, at the thought of seeing ruins or in the presence of them.

Many times, these symptoms feed back to themselves, and they also feed back the catastrophic thoughts also associated with phobias, in this case, of the type: “I will hurt myself”, “something will fall on me”, “there will be someone hidden who will hurt me”, etc.

Moreover, what often happens in atrophobia is that the person feels “something” that makes him/her uncomfortable with the idea of ruin (or a little fear) and ends up interpreting these physical (or cognitive) sensations in a very catastrophic way, so that this “erroneous” interpretation of the symptoms ends up generating the symptoms of the phobia itself .

That is, this whole process ends up becoming a kind of feedback loop that is totally unadaptive to the person , because objective reality (phobic object) will not really hurt him (in fact, this is what phobias are all about).

However, a traumatic event is not the only probable cause of atrophobia; it may also have developed from hearing negative stories lived in ruins (e.g. through television, from friends, family, books…). In other words, phobias can also be acquired by vicarious or verbal conditioning .

Watching films where very negative things happen in ruins (e.g. murders, accidents…) can also be related to the origin of atrophobia; if we add to this a certain individual vulnerability (because we are very sensitive, for example, or because we have “inherited” a certain biological predisposition to anxiety disorders in general or to specific phobias in particular), this can facilitate and explain its appearance.

In psychotherapy, the treatment of atrophobia, like that of most specific phobias, is usually of two types: exposure therapy and cognitive-behavioral therapy.

In exposure therapy, the patient is exposed to the stimulus or phobic situation, gradually and through a hierarchy of items (from least to most anxious, in order). This list of items is developed together with the patient.

In the specific case of atrophobia, one can opt for the following: start by seeing ruins through photographs, films, etc., and gradually expose the patient to the ruins live.

That is to say, accompany him to visit some ruins (although later he can -and must- do it alone); the first times, for example, he must go to “X” place, and little by little get closer until he touches the ruins and stays there without any anxiety (this will be the objective).

In exposure therapy, the patient must “resist” the anxiety that appears before the phobic object , and learn to fight it (for example through a state of relaxation, more typical of Systematic Desensitization). The objective is that finally the psychophysiological symptoms remain “disassociated” from the phobic stimulus, and, in the case of atrophobia, that they do not appear before the ruins.

Cognitive-behavioral therapy (CBT) is another treatment we can apply in cases of atrophobia. In it, priority will be given to providing the patient with the resources and strategies needed to cope with the phobia .

More specifically, you will be trained in relaxation techniques, breathing, etc., that is, in different coping techniques that you can use to reduce anxiety when it appears.

In addition, CBT also works with the patient’s dysfunctional thoughts associated with the phobic stimulus (e.g. “I’ll get hurt in a wreck”, “I won’t be able to escape from it…”), helping the patient to replace them with more realistic and adaptive ones (e.g. “I don’t have to get hurt”, “wrecks are not dangerous”, etc.).