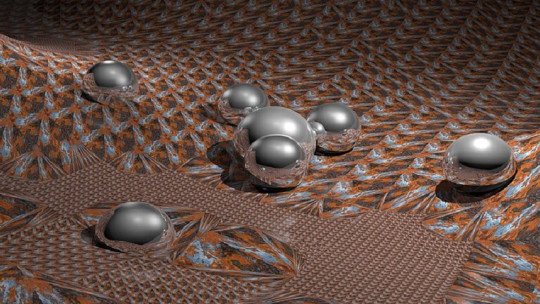 There’s a lot we don’t know. Reality is something complex and difficult to interpret, to which humanity has gone over time trying to provide a plausible explanation. Religion, philosophy and science are some of the main ways through which we have tried to explain the world, which have evolved through the ages. For example, in ancient times the existence of cells and molecules was unknown, even though today their existence is something that most people know. And even less so the substances that make them up.

However, even before they could examine any kind of matter through a microscope, the Greeks generated a theory that valued that all matter was made up of clusters of particles, which in turn could be reduced into smaller and smaller ones until they reached an indivisible particle. We are talking about the appearance of atomism .

Atomism: what it is, and general principles

Atomism is a philosophical paradigm born in ancient Greece , which considers that reality and the whole of matter is composed of different particles that can be reduced into smaller and smaller units until they reach the last particles that cannot be reduced or divided any more: atoms. In reality, according to this paradigm, there are only atoms and a vacuum.

This paradigm is a concept that was born in philosophy and that has been subsequently explored and used at a scientific level, being one of the main bases of chemistry. Atomism gives more importance to the individual components than to the whole, considering that the fact of incorporating new atoms does not generate relevant differences in the elements that they constitute. Atomism is also characterized by being essentially mechanistic .

There are different types of classical atomism, divided into two concrete positions: absolute physical atomism that considers everything including the mind or concepts such as the soul or even God to be configured by atoms, and relative atomism in which matter only refers to the physical and corporeal.

Absolute atomism is the best known at the philosophical level, being the first to emerge and the one that marked a style of thought that would allow later developments. Everything is explained by the atom, being matter all that exists. The atom, the void (in which nothing exists) and the movement of atoms is what configures everything that exists, with different processes of aggregation and destruction of structures formed by atoms. Likewise, all matter is identical and has the same properties, differing only in degree.

Relative atomism is born in order to separate physical matter with spiritual aspects . The atom would therefore constitute only all that is material, the soul or deities being another type of matter. It is considered that the way matter is organized is due to the order generated by the divinity.

Atomism as such has not remained indifferent to the passage of time, but rather has evolved in pursuit of scientific advances and the discoveries that have been made in relation to the configuration of matter.

The emergence of atomism is attributed to Leucippus , author of the fifth century BC, which in the work Megasdiacosmos sets a certain precedent in this regard. However, the classical author most considered as the true father of atomism was Democritus, a contemporary of Socrates. It was Democritus who proposed that the world was divided into atoms and void, this being the space through which atoms can move freely. Likewise, the atom is considered immutable, eternal and indivisible.

After Democritus, atomism was worked on by different authors who were his disciples, such as Anaxagoras (who proposed the existence of elemental particles that were different from each other) or Empedocles (who mixed the concept of the atom with the four classical elements).

The last one who would follow the tradition proposed by Democritus would be Nausifanes , master of Epicurus. From this, Epicurus generates a change of orientation in the thought of atomism, focusing it on human, moral and ethical elements and at the same time on the mundane and the evidence (Democritus’ classic was more theoretical and cosmological). This tradition has various concepts that would later set a precedent for some of Karl Marx’s theses.

With the arrival of the Middle Ages atomism acquires different connotations, appearing the relative physical atomism and those who believe in it consider that atoms are divine creation and their union obeys the law of God . After that different authors like Paracelsus in the Renaissance would link it with alchemy.

Later, in the Modern Age, atomism would resurface at first linked to the ecclesiastical dogma, although it was included in the debate of whether all atoms are equal (homogeneous) or different (heterogeneous), positions defended respectively by Gassendi and Maignan. Also multiple other authors support atomism, among them Newton .

Scientific and technological development in recent centuries has made it possible to observe the existence of what are still considered to be the basic units of matter, the so-called atoms.

Dalton would generate one of the first scientific laws concerning atomism, already within current physics. Through the law of defined proportion and the law of multiple proportions he explained how the different chemical elements combine: the simple elements are composed of unalterable atoms whose characteristics explain the way in which the different weights of the elements make up a compound molecule.

Avogadro would contribute to the establishment of atomism as scientific by classifying atomic weights on the basis of the weight of hydrogen , something that has also reached us today through the periodic table of the elements described by Mendeleev.

However, with Thompson’s discovery of electrons in 1897, Rutherford’s experiments and Chadwick’s contribution it has been discovered that atoms are actually also composed of other electrically charged substructures, protons, neutrons and electrons. In fact, classical physics would gradually be replaced by quantum physics as the behaviour of such particles was studied and that even these could be subdivided, as is the case with the quarks discovered by Perl. It also links and deepens the study of the forces that generate union and separation of matter.

Today, even more primitive particles have been discovered, such as the recently discovered Higgs boson, or even from anti-matter, there being no vacuum itself.

Although what we call atom today may not be the concept proposed by the Greeks , it cannot be ruled out that we will end up finding a particle that is not divisible, although there will always be the doubt whether with enough technology and capacity we could observe even more basic elements.