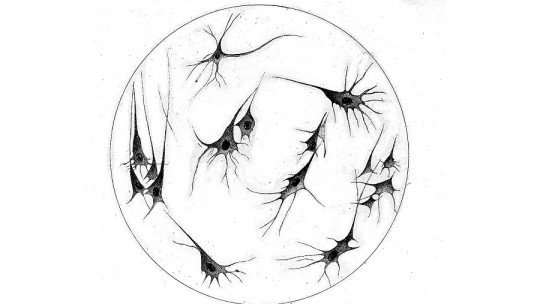 Our brain is in charge of planning, coordinating and executing the movements necessary to carry out daily activities, and it does so mainly through the primary motor area. In this brain region are some of the largest cells of our nervous system, the Betz cells; a type of giant pyramidal neuron that is responsible for transmitting motor commands through nerve impulses that travel from the neocortex to the spinal cord.

In this article we explain what the Betz cells are , what their main characteristics are, where they are located, and in what pathological processes they are involved.

Betz’s cells are some of the largest motor neurons in the human nervous system , and are named after the Ukrainian scientist Vladimir A. Betz, who described this type of nerve cell in the late 19th century. These pyramid-shaped cells are gigantic in size (compared to most neurons) and are located in the gray matter of the primary motor cortex, a region of the brain responsible, along with other adjacent areas, for planning and executing muscle movements.

The Betz neurons are characterized by large somas and extensive basilar dendrites. These dendrites are significantly larger than those of other superficial and deep pyramidal neurons. The apical dendrites and soma of these cells are oriented along a vertical axis, which may contribute to columnar processing in the primary motor cortex. In addition, the somas of Betz cells have a heterogeneous shape , including pyramidal, triangular and spindle-shaped cell bodies.

These motor neurons send their axons through the corticospinal tract to the anterior shaft of the spinal cord, where they contact the lower motor neuron. Although Betz cells have an apical dendrite typical of pyramidal neurons, they have more primary dendritic axes, and these do not leave the soma only at basal angles, but branch out from almost any point asymmetrically.

The perisomatic and basal dendrites of Betz’s neurons are projected in all the cortical layers, but most of their horizontal projections populate the layers V and VI , some of which reach the white matter. According to one study, Betz cells represent approximately 10% of the total population of pyramidal cells in the Vb layer of the primary human motor cortex.

The Betz cells are located in the V layer of the primary motor cortex. This layer contains this type of giant pyramidal neurons, responsible for sending their long axons to the contralateral motor nuclei of the cranial nerves and to the lower motor neurons located in the ventral shaft of the spinal cord.

The axons of Betz’s neurons are part of the corticospinal tract , and although these nerve cells do not make up the entire motor output of the cortex, they are responsible for providing a clear marker for the primary motor cortex (Brodmann area 4). This region of the brain contains a topographic map of the muscles of our body, in which the head is represented laterally, the leg medially and the rest of the parts in intermediate positions.

Betz cells are found singly or in small groups of three to four neurons, especially in the dorsal part of the primary motor cortex. The cell bodies of these neurons continually decrease in size along a mediolateral gradient. This reduction in size seems to be related to motor somatotomy: the largest cells are found in the foot and leg region, where efferent axons project further along the corticospinal tract.

It should be noted that Betz cells are found in the motor cortex of all primates and, according to studies, the somas of these neurons become proportionally larger with increases in body weight, brain weight and encephalization. In addition, phylogenetic variation in the volumetric scale of such neurons may be related to species-specific adaptations.

There appear to be only a few central nervous system pathologies involving Betz cells. These are generally neurodegenerative diseases that more or less specifically affect the primary motor cortex and its projections .

The extent to which Betz cells are affected in degenerative motor neuron diseases such as ALS is not yet known. This progressive disease is known to affect not only the motor system, but also several non-motor systems and subcortical areas, and may occur sporadically or in families. The pathophysiological mechanism in ALS is the loss of anterior horn cells and degeneration of the corticospinal tract with involvement of the upper motor neurons.

There are other neurodegenerative diseases within the spectrum of ALS, for example, the ALS-parkinsonism-dementia complex , a disorder involving the motor cortical pathways and primary lateral sclerosis involving only the upper motor neurons with a total loss of Betz cells.

At the cortical cell level, degeneration of dendritic arborizations, changes in synapses and loss of Betz cells in ALS and other degenerative diseases involving the primary motor cortex suggest a involvement of this neural subpopulation in the process of this type of neurological disease.

Ramón y Cajal was one of the first researchers to identify a difference in the morphology of Betz cells during the lifespan between newborns and adults; the famous anatomist discovered that the basal dendrites of this type of neurons were longer in developed brains .

More recent studies have shown that in normally aging brains, Betz cells have reduced and swollen dendritic spines. These age-related changes have been considered a possible correlate of the deceleration of motor performance and agility, as well as increased stiffness during life, since Betz cells are preferentially involved in the tone of stabilizing muscles .

In addition, animal research has reported a decrease in the size of Betz cell somas in normal adult rhesus monkeys, along with a progressive appearance of highly specific age-related inclusion bodies (abnormal subcellular structures). However, these data contradict previous observations of inflammation of Betz cells during aging in humans.

The fact that Betz cells may be affected during aging is important considering the fact that studies have only investigated the brains of older patients. However, it should be noted that the primary motor cortex is usually spared from Alzheimer’s disease, at least until the very late stages of dementia, and pathological changes in large neurons are only observed in atypical cases with prominent motor symptoms or in cases of amyotrophic lateral sclerosis-parkinsonism-dementia complex.