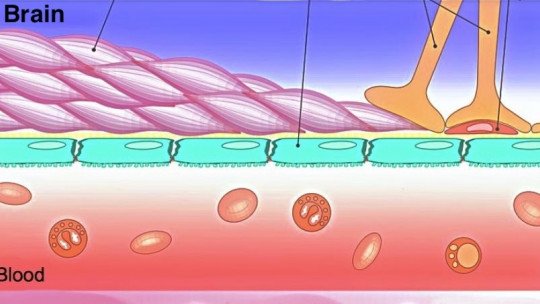 In the brain and the whole nervous system it is a fundamental organ for the human being. Therefore, it is strongly protected by bones (the skull and the spine) and by a system of three layers of membranes called meninges. The safety of the different parts of the brain has been reinforced by millions of years of evolution.

However, while all of these elements may be essential in protecting the skull from a blow or trauma, they may not be enough to protect the brain from other types of dangers such as viral infections that could come through the blood. To avoid this type of danger as much as possible, we have another type of protection: the blood-brain barrier (BBB) .

The discovery of BHE

Although it was previously suspected that something separated the content of the blood present in the blood system and the nervous system, it was not until 1885 that this was established. A researcher named Paul Ehrlich would introduce a dye into the bloodstream of an animal and later observe that the only point that was not dyed was the central nervous system, and specifically the brain . The reason for this had to be related to a protective system surrounding that area as if it were a membrane.

Later on, another researcher, Edwin Goldman, would try the opposite process by dyeing the cerebrospinal fluid, observing that the only parts with color corresponded to the nervous tissue. These experiments reflect the existence of something that produces a high level of blockage between the nervous system and the rest of the body , something that years later would be called the blood-brain barrier by Lewandowski and explored by a large number of experts.

A protection between blood and brain

The blood-brain barrier is a small layer of endothelial cells, cells that are part of the wall of the blood vessels , located along most of the capillaries that supply the brain. The main characteristic of this layer is its high level of impermeability, preventing a large number of substances from passing from the blood to the brain and vice versa.

Thus, the HEB acts as a filter between the blood and nervous systems . Despite this, some substances such as water, oxygen, glucose, carbon dioxide, amino acids and a few other molecules can pass through, with the waterproofing being relative.

Its action as a filter is carried out both through its structure, by restricting the union between the cells that compose it from passing to the different substances, and through the metabolism of the substances that reach it through the use of enzymes and carriers. In other words, it has a physical facet and another that is chemical.

Although the blood-brain barrier is itself a layer of endothelial cells, its proper functioning also depends on other types of cell structures. Specifically, it is supported by cells called pericytes, which give structural support and envelop the endothelial cells by keeping the blood vessel wall and the microglia stable.

The blind spots of the BHE

Despite the importance of protecting the nervous system, the blood-brain barrier does not cover the whole brain, since it needs to receive and be able to emit some substances , such as hormones and neurotransmitters. The existence of this kind of blind spots is necessary to ensure the proper functioning of the body, since it is not possible to keep the brain totally isolated from what happens in the rest of the body.

The areas not protected by this barrier are around the third ventricle of the brain and are called the circumventricular organs. In these areas the capillaries have a fenestrated endothelium, with some openings or accesses that allow the flow of substances from one side of the membrane to the other.

The locations without blood-brain barrier are mainly of the neuroendocrine system and the autonomic nervous system, being some of the structures of this group of circumventricular organs the neurohypophysis, the pineal gland, some areas of the hypothalamus, the postrema area the vascular organ of the lamina terminalis and the subfornical organ (below the phornix).

The most common and frequently used mechanism in this sense is the use of transporters , in which the element or substance to be transported is bound to a receptor that subsequently enters the cytoplasm of the endothelial cell. Once there, the substance is separated from the receptor and is excreted to the other side by the endothelial cell itself.

Another mechanism by which substances cross the blood-brain barrier is transcytosis , a process in which a series of vesicles are formed in the barrier through which substances can pass from one side to the other.

Transmembrane diffusion allows ions of different charge to move through the blood-brain barrier, with the electronic charge and concentration gradient acting in such a way that substances on either side of the barrier are attracted to each other.

Finally, a fourth mechanism through which some substances pass into the brain without the blood-brain barrier intervening is to skip it directly. One way to do this is to use sensory neurons, forcing a reverse transmission through the axon of the neuron to its soma. This is the mechanism used by diseases as well known as rabies.

As we have already seen, some of the properties that make the blood-brain barrier an essential element for the nervous system, since this layer of endothelial cells mainly fulfils the following functions.

The main function of the blood-brain barrier is to protect the brain from the arrival of external substances , preventing the passage of these elements. In this way, the vast majority of molecules external to the nervous system itself cannot affect it, preventing a large part of viral and bacterial infections from affecting the brain.

In addition to this defensive function by blocking the entry of harmful elements, its presence also allows the correct maintenance of the neuronal environment by keeping the composition of the interstitial fluid that bathes and maintains the cells constant.

A final function of the blood-brain barrier is to metabolize or modify elements in order to make them cross between blood and nerve tissues without altering the functioning of the nervous system in an undesirable way. Of course, some substances escape this control mechanism.

The fact that the blood-brain barrier is so impermeable and does not allow most elements to enter is beneficial when the brain is functioning properly and no medical or psychiatric intervention is required. But in cases where external action is required on a medical or pharmacological level, this barrier is a difficulty with which it is difficult to treat.

The fact is that many of the drugs that are applied at a medical level and that would serve to treat an illness or infection in another part of the body are not effective in treating the problem in the brain, due largely to the blocking action of the blood-brain barrier. Examples of this can be found in medicines dedicated to fighting tumours, Parkinson’s disease or dementia.

In order to solve this problem it is often necessary to inject the substance directly into the interstitial fluid , use the circumventricular organs as an access route, break the barrier temporarily by using microbubbles guided to specific points by ultrasound or use chemical compositions that can cross the blood-brain barrier through some of the mechanisms described above.