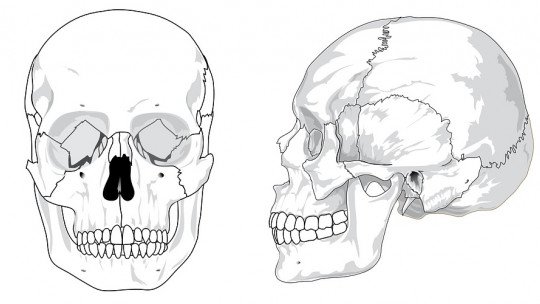 The brain is one of the most important organs in the human body, governing the functioning of all other body systems. Its protection is essential for survival.

Fortunately, we have different protection mechanisms, one of which is a strong bone cover that surrounds it. We are talking about the skull, which is composed of different bones .

Bone protection of the brain: the skull

When we talk about the skull, we usually imagine all the bones that are part of the head. This consideration is not entirely correct, since the skull as such is technically the bony structure that covers the brain . The rest of the bones, like those of the jaw, are part of the facial skeleton.

However, given its use as a synonym for the set of bones in the head is sometimes distinguished between neurocranium, which would be the skull itself, which protects the brain) and viscerocranium (which would include the bony structure that gives shape to the face and of which the bones of the ear, the nostrils, the eye socket, the nasal cavity and the set of bones that form the jaw are part).

In general both neurocranium and viscerocranium are solidly connected , with the border between them being marked by the ear canal and the upper part of the eye socket

The adult human skull, in the sense of a neurocranium, is a set of eight bones welded together and connected to each other along their development by hardened connective tissue. Its main function is to protect the brain and to provide a basic structure to which part of the facial muscles can adhere, as well as to provide a stable position for blood vessels, cranial nerves and the brain itself. The skull can also be divided into the cranial vault and the base of the skull.

Bones that make up the skull

As we have seen, the skull or neurocranium is configured by a total of eight bones joined and welded together throughout the development of the individual in what are called sutures. All of them have different openings and holes through which blood vessels and nerves circulate .

The different bones that make up the skull, as well as some of its substructures, are described below.

This bone is located over and protects the frontal lobe . It allows the forehead to be shaped and reaches the upper part of the eye’s vault or supraorbital margin, being a union point between the neurocranium and viscerocranium. It is connected to the parietal bones by the coronary suture and to the nasal bones by the frontonasal suture.

These are the largest bones of the skull , which form most of the upper and lateral region of the skull. It is connected to the frontal bone by the coronary suture, to the parietal bones by the squamous suture and to the occipital bone by the lambdoid suture. Both parietals are joined together by the sagittal suture.

Two bones each located under one of the parietal bones and attached to them by the squamous sutures. These bones, which are irregular, can be divided into three areas: the scaly one, which is the one located around the squamous suture, the mastoid one, which refers to the part closest to the jaw in which several muscles of the jaw and the neck settle, and the stone one, which is located in deeper regions, forming part of the base of the skull and possessing the middle and inner ear inside. There is also a tympanic region , which surrounds the ear canal.

This bone mainly forms the base of the skull, with the foramen magnum or orifice in which the brain and spinal cord connect. It protects part of the occipital and temporal lobe, the cerebellum and the brain stem. It has several bumps and ridges that connect to the vertebrae. It is connected to the parietal by the lambdoid suture and to the temporal by the occipitomastoid.

This butterfly or bat-shaped bone is located in an area at the level of the temple , connecting to the frontal, temporal and occipital bones. It runs from side to side of the skull, horizontally, and is composed of the body and major and minor wings and the pterygoid process. In the first one can be found the Turkish chair, structure that surrounds and protects the pituitary. The major wings are part of the dorsal wall of the ocular orbit, while the minor wings are part of the medial part. It keeps the rest of the bones of the skull together and connected.

The bone known as the ethmoid is situated between the sphenoid and the nasal bone , and participates in the formation of the eye orbits and nasal cavities, acting as the roof of the latter (specifically the part called the sieve plate) and the floor of the former, as well as separating the two (the latter is responsible for the lateral masses of the ethmoid).

This bone connects to the meninges through the crista galli. It has numerous cavities called esmoidal cells .

Although the bones of the skull are strictly speaking the previous ones, it must be taken into account that there are other bones in the structure of the head beyond them , those corresponding to the viscerocranium. In this case we find a total of 14 bones, which together with the previous 8 make up the average 22 bones of an adult human head (to which we can add those of the ear).

They are listed below, with each person possessing two of each of the following except the vomit and the jaw (the latter being the only movable bone structure).

In addition to these, within the viscerocranium we can also find the internal ossicles of the ear that allow the reverberation of sound to the cloche: hammer, anvil and stirrup .