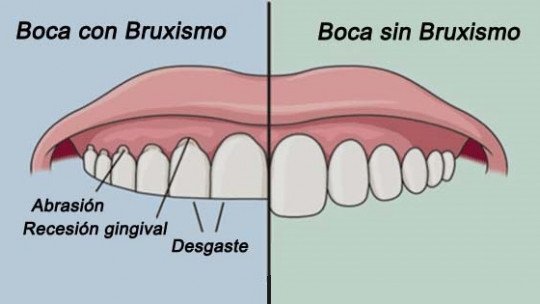 If you wake up in the morning with a headache and unexplained jaw discomfort,
you may have developed an unconscious habit called bruxism and it manifests itself especially during sleep.

Bruxism is a basically involuntary and automatic tendency to grind your teeth by tensing your jaw without a clear purpose. It can appear in a waking state, as a habit that appears without being noticed (as in the case of
trichotillomania) or during sleep, when it is more difficult to control.

The grinding of teeth that characterizes bruxism
consists of the constant rubbing of the molars and premolars, tensing the jaw and making them rub against each other by repeatedly moving back and forth or diagonally.in some cases the teeth in the front area are also involved.

As for the types of bruxism, no unified classification system has been developed and in any case it is usually described according to its intensity, the moment in which it manifests itself (during wakefulness, during sleep or in both states), its duration, etc. That is, beyond the description of the different symptoms through which this tooth grinding is manifested, there is no way to distinguish between variants of bruxism.

Bruxism usually presents symptoms both on a psychological level and in the state of the tissues of the jaw and teeth . This means that they affect the quality of life of people in many ways and that their effects are not simply limited to the times when teeth grinding is present.

The main symptoms of bruxism are the following:

In addition, bruxism can generate side effects such as the appearance of problems in the jaw joints, pain in the ears or psychological problems derived from lack of sleep and, if necessary, eating problems.

Of course, the diagnosis of bruxism can only be made by a competent professional in the field , so it is necessary to go through a medical review to determine whether or not this habit is present. In addition, as it is an act that appears involuntarily or during sleep, it is possible that another person is more aware of the presence of the symptoms and that signals the need to see a specialist.

Psychological and Neurological Causes of Bruxism

The causes of bruxism are largely unknown, because many times its appearance seems to be triggered by neurological causes (and therefore difficult to understand by itself) or psychological causes (in which case the triggers may be in the person’s interaction with elements in his environment).

That’s why beyond some cases in which the appearance of bruxism is favored by the formation of the jaw and teeth, grinding of teeth has also been associated with continuous episodes of stress, which in turn can be aggravated by lack of sleep and the rest of the symptoms of bruxism.

As for the neurological houses of bruxism,
these would be linked to a normal release and uptake of neurotransmitters in some parts of the brain , not necessarily due to structural malformations .

The most commonly used resource to protect from the effects of bruxism is the use of splints made with moulds that adapt to the teeth and protect them from dental wear.
However, this solution only serves to partially alleviate the symptoms, and by itself it does not serve to cure bruxism .

Effective treatment of tooth grinding should be done after proper medical review, and in many cases should include measures to reduce stress levels, so psychotherapy specializing in parasomnias and
anxiety disorders and training in relaxation techniques are recommended. The objective of these treatments performed from the psychological approach will be to make the intensity in which bruxism occurs decrease significantly.