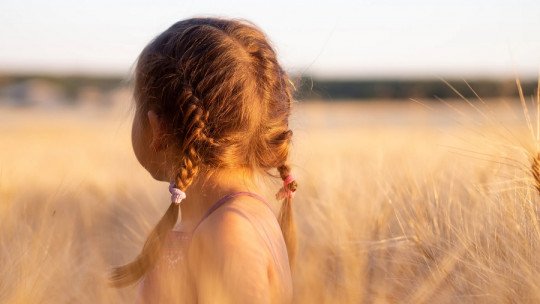 Hallucinations are abnormal perceptual experiences. They are often described as a sensation without a corresponding object: something you see, hear, smell, taste, touch or feel inside; but without any real stimulus to explain it.

Although it is true that many times they have been framed in a psychopathological context, and specifically in disorders such as psychosis, these are experiences that can occur in any healthy individual under certain conditions.

Most of the scientific literature on the subject focuses on the adult population, for which the presence of the phenomenon has been explored with greater emphasis, but it would not be fair to overlook other periods of life in which it may also appear.

Therefore, in this article we will try to answer only one question: can children hear voices through hallucination? To do so, we will resort to scientific evidence on the subject.

Can children hear voices through hallucination?

There is a popular idea that, for an unknown reason, young children are capable of perceiving some nuances of reality that escape the trained eye of the adult man. This belief is common in many cultures around the world, and it is very easy to find testimonies in which the apparent encounter of an infant with a being that only he seems to notice is described, in front of the astonished look of those who might be on the scene. There are even viral videos on the subject, which have become popular on the net.

The explanations given for this phenomenon have been diverse. At first, we resorted to hypotheses of a paranormal nature, through which a spiritual or transcendental vision of childhood was raised. Today, thanks to the development of scientific knowledge, we can provide greater empirical soundness to this specific fact, drawing up operational hypotheses that fit in with less obscure explanations and are closer to reality.

Before we go into more detail about the phenomenon of childhood auditory hallucination, it is essential to convey calm on the subject. These experiences do not usually constitute an indication of mental pathology , and there are even authors who consider them an intrinsic milestone in the development of the central nervous system. In these lines we will approach the knowledge about the topic in the light of the scientific evidence.

Today we have a fairly accurate knowledge of the prevalence of auditory hallucinations across all age periods.

Studies addressing the issue reveal that during childhood (9-12 years) 17% of children experience them, with this percentage falling to less than half (7.5%) in adolescents. Other research shows more even percentages, so there seem to be slight discrepancies between authors.

There is a certain consensus in the scientific community that childhood is a stage prone to this type of experience , but that it is in adulthood when its presence most clearly suggests a possible basic mental alteration, despite the fact that the absolute prevalence rate in this age period is dramatically reduced. This fact supports theoretical models that see hallucination as a normative element for the development of the central nervous system, even though we still do not understand the mechanisms involved.

The “physical” properties of these forms of perception are described in a different way . There are children who say they hear very simple sounds, like tapping or similar, but in certain cases they tell of experiences of greater complexity (human voices that demand attention or conversations between two or more “invisible figures”). Sometimes they can generate emotions of fear, promoting the warmth of the figures involved.

Hallucinations have been described among children as young as five years old, and even younger, so the subtype classified as “early onset” has been coined.

We will now address five of the most common causes of childhood hallucinations according to the state of the art. Physiological, psychological and social factors will be included.

A very high percentage of children refer to having (or having had) imaginary friends at some point in their lives, and the literature indicates that in these cases there is a greater tendency to refer to visual and auditory hallucinations. This phenomenon, which is not a cause for concern, pursues five goals: to regulate emotions and solve problems, to explore ideals, to find someone to have fun with, to endure loneliness, and to practice social behaviors or roles.

Most parents feel that this is not a negative situation, so they usually do not worry too much or consult their pediatrician. In general, it is considered one of the contexts in which hallucination can present itself in a benign way. Along the same lines, there are even testimonies that say that imaginary companions have supported the child during evolutionary transitions, such as the birth of a young sibling or the first contact with school or daycare (and the corresponding absence of attachment figures).

Finally, almost all children are able to recognise their imaginary friend as a creation of their own , which does not exist beyond their own head. This ability to “recognize” is a good prognostic factor for childhood hallucinations in general, and not only for the harmless assumption of imaginary friends.

Emotional distress, cognitive distortions and traumatic events constitute a triad that has been associated with the appearance of the positive symptoms of psychosis (hallucinations and delusions), something that has also been replicated in the child and adolescent population.

This risk factor would be directly linked to the diathesis-stress hypothesis, and would be linked to genetic factors of some kind. The model suggests that only the vulnerability for psychosis is transmitted from parents to children, but not the disorder itself (through specific alterations in the migration of neurons during development).

However, the experience of intense stress would act as a trigger , precipitating its definitive clinical expression (from genotype to phenotype).

Not all children who refer to hallucinations have suffered from situations of a traumatic nature, nor do all those who have gone through such events end up experiencing them. What has been corroborated is that when this phenomenon occurs in a child without evidence of psychosis, as a result of the adversity he or she may be experiencing, the symptom tends to be diluted in a directly proportional manner as the conflict situation is resolved.

Sleep deprivation has been associated with hallucinations in all age periods from adulthood to childhood. There is evidence that the absence of sleep generates cognitive alterations (in memory, attention, etc.), changes in mood and distortions of perception . All this occurs in healthy children, without a diagnosis of any psychic disorder, and also among adults. Situations such as extreme sensory isolation can also cause them, as well as intense fatigue and hyperthermia.

4. Metacognition: distinction between the mental and the real

Metacognition is the ability of human beings to become aware of their internal processes, such as thoughts and emotions. It is a way of thinking about what you think, or even feeling about what you feel. This higher function is essential to discriminate what is created “inside” from what is perceived outside, and has been postulated as a key element in understanding why hallucinations occur.

Research on metacognition places all the functions that are integrated in it (mnestic, perceptual, etc.) in the prefrontal cortex, precisely the region of the brain that takes the longest to mature (well into the second decade of life). Perhaps this delay would explain the age gradient for the prevalence of hallucination (more common in early childhood and progressively more infrequent). Thus, as this circuit would reach a higher development, the subject would be more capable of differentiating correctly between his thoughts and external stimuli, so that the hallucinations would be diluted in a definitive way.

Other studies point out that hallucinations in childhood are more common in children with difficulty in a normative development of the theory of mind , that is, the ability to know themselves as individuals separated from their environment and to attribute other internal states different from their own. Despite being very interesting, both this theory and the one referring to metacognition need further research in the future.

Neuroimaging studies with children who have auditory hallucinations point to a functional disturbance in the Neural Defect Network, which is responsible for the things we think and feel when the mind is at rest. This is a set of structures that are activated when apparently “we are not doing anything” , and that seem to have the purpose of preparing the central nervous system to activate itself spontaneously in case of need.

It has also been described that the primary/secondary auditory cortex, which responds to the perception of an objective sound stimulus, would be activated at the very moment when children indicate hearing a hallucination.

In conclusion, and recovering the question with which we opened this text (can children hear voices through hallucination?), the answer would be yes. Despite this, there are still many unanswered questions concerning the causes and factors determining the prognosis.

Hallucinations in childhood are usually a benign and transient phenomenon , which tends to be completely resolved as time goes by. Even so, in some cases it is possible that complications may arise that need to be taken into account, as they may require a specific therapeutic approach.

It has been observed that the hallucinatory experience in childhood may be associated with significant emotional distress and the appearance of other emotional problems of clinical relevance. In adolescence, a greater frequency of suicidal ideas has been described among those who report suffering the symptom, after having controlled concomitant health problems. Therefore, as long as the symptom persists and generates some suffering to the person, it will be necessary to seek professional help.