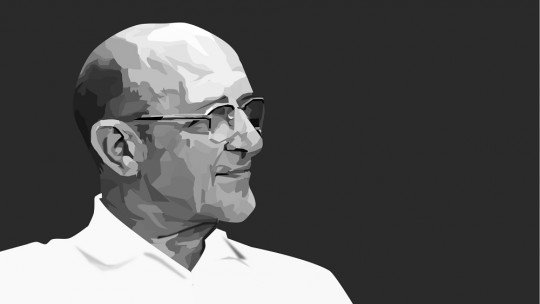 Carl Rogers’ name is widely known in the world of psychology. One of the pioneers of humanistic psychology and creator of client-centered therapy, his contributions even earned him the presidency of the APA. Knowing the life of this author can be of great interest, and that is why in this article we will make a summary of the biography of Carl Rogers .

Carl Ransom Rogers was born on January 1902 in Oak Park, Chicago , the fourth of six children. His parents were Walter Rogers (civil engineer) and Julia Rogers (housewife), the fourth of six children. The family had strong Christian and evangelical convictions, with religion being important in the author’s mature and intellectual development. The family bond was positive and close, with the parents instilling values such as the importance of effort and perseverance.

When he was twelve years old, his family bought a farm and moved there, spending his adolescence there and Rogers acquired a great interest in agriculture and biology , actively participating in the care of animals and often reading scientific literature related to this sector.

Years of training and marriage

In 1919, he enrolled at the University of Wisconsin in the career of Agriculture. However, throughout his studies and after attending several religious conferences he decided to turn his interest and studies towards theology and history .

In 1922, during his penultimate year of studies, he was chosen to participate in an international conference of the World Federation of Christian Students in China. During his stay on the Asian continent and at the conference he was able to observe a great diversity of beliefs and the confrontation that still existed between members of the countries involved in opposing sides during the First World War. This trip would make Rogers rethink his conception of life. After his return, he graduated from History.

During his university years he would renew contact with Ellen Elliott, a former elementary school classmate with whom he would fall in love and whom he would end up marrying in 1924. After that, and after finishing his studies, the couple moved to New York, where Rogers would register at the “Union Theological Seminary” . There, he would continue his studies in theology and philosophy, while beginning to attend various courses at the Teachers’ College of Columbia University. In the latter, he discovered and became interested in aspects related to psychology.

After concluding in one of the seminaries that his path and his philosophy did not belong to religion (although he kept his interest in aspects such as the meaning of life), he decided to abandon his career in theology. Likewise he would enroll at Columbia University to study Psychology , specifically in the clinical psychology program, and would begin working with minors at the Institute for Child Guidance in New York. He received his master’s degree in 1928 and his doctorate in psychology in 1931.

During 1928, he was hired at the Rochester Society for the Prevention of Child Cruelty, where he would work on aspects such as crime prevention for young people at risk of social exclusion and with different problems and of which he would become director. In this place he would work for twelve years, observing and working with multiple patients.

In Rochester he observed on several occasions that in working with patients, it is the client himself who knows most about what affects him and where his problems are, often knowing which direction to take to solve them. He also tried to rush through proposals for forms of therapy .

In 1940 he was hired by Ohia State University as a professor, after the publication of his first book “Clinical Treatment of the Problem Child” the previous year. The same year he began to give lectures, notably at the University of Minesotta where he established the basis of non-directive therapy. Rogers stated that the user of the psychologist’s services was not a patient but a client (which implies that the subject is not limited to receiving the intervention but is an active subject and the architect of his own recovery) and that the role of the therapist is to help the client in a non-directive way, as a support to the subject’s own activity.

In 1945 he was invited to create a care center at the University of Chicago, learning as he went along to establish useful, close and therapeutically productive relationships with his patients. Due to his numerous contributions in 1947 he was appointed president of the American Psychological Association (APA) . Throughout 1951 he would publish “Client-Centred Psychotherapy”, in which the author develops his well-known theory in which he highlights the role of the capacity of each of us to achieve personal growth and change.

Rogers returned to the University of Wisconsin in 1957, where he would teach in the department of psychology while conducting research programs with schizophrenic populations . However, different conflicts in that department caused the author to become disenchanted with the university world.In 1964 he was offered a position as a researcher in La Jolla, where he lived and worked until his death.

During the last years of his life Carl Rogers continued to research and publish various important works, as well as to work in clinical practice and to give various lectures.

In February 1987, Rogers broke his hip in a fall that required him to undergo surgery. The operation was a success, but soon after he suffered a heart attack. Carl Rogers died on February 4, 1987 in San Diego , California.

Rogers’ legacy is extensive. He is one of the pioneering authors of humanist psychology , highly interested in personal development and in the possibility of the person himself to govern his life and evolve. In addition to this, he highlights the concept of therapy centred on the client, the importance given to the interaction between therapist and patient and the fact of proposing a non-directive therapy, which represented a revolution in his time. Many of their methods are still applied today, or have inspired other authors.