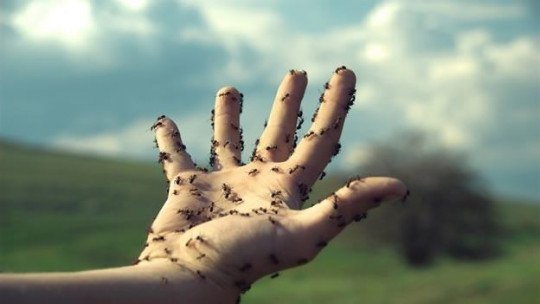 Among the various perceptive systems, the visual system is the main tool through which our species perceives and reacts to its environment. From birth we possess a visual capacity that allows us to detect the stimuli that surround us and react to them.

Sight, however, is an evolving sense, developing mainly during the first year of life. After certain ages, it is common for the visual capacity to be reduced and problems such as eyestrain , cataracts and even glaucoma to appear. Likewise, it is possible that the areas of the brain responsible for vision no longer function with the usual precision, or that the visual connections with those of other sensory and even intellectual processes are weakened.

This type of problem can cause our visual system to perceive stimuli that are not present, as is the case with Charles Bonnet Syndrome .

What is Charles Bonnet Syndrome?

Charles Bonnet Syndrome is the clinical picture characterized by the appearance of visual hallucinations in patients with problems in the visual pathway, whether these problems are located in the visual organs, their connections to the brain or the brain areas involved in vision.

The main diagnostic criteria of this syndrome are the aforementioned presence of visual hallucinations and that these occur in total absence of cognitive and consciousness alterations, psychiatric, neurological or substance use disorders that could explain their appearance.

In other words, these hallucinations occur in healthy subjects with no other problem than the strictly visual one , and the presence of dementia (a condition which sometimes also presents visual hallucinations), intoxication and other disorders must be ruled out.

Thus, Charles Bonnet Syndrome would mainly appear in healthy individuals who suffer from no other alteration than loss of vision. Since a large proportion of visual problems appear during old age, it is especially prevalent in the elderly population.

The hallucinations present in this type of disorder are very variable , although they present a series of common characteristics such as occurring with clarity of conscience, without the illusion of reality (that is, the patient knows that it is something not real), they combine with normal perceptions, they appear and disappear without there being a clear cause for it, and they represent a phenomenon that surprises the sufferer, although there is usually no great fear of them.

Regarding the content of the hallucinations that occur in Charles Bonnet Syndrome, it is common to perceive human or small animal figures (a type of hallucination called Lilliputian ), as well as flashes or bright colours.

The perception itself is clear and vivid, located in the space outside the person himself (i.e., false perceptions are perceived as if they were elements of the environment, although they are recognized as unreal), with a high level of definition that contrasts greatly with real perception (remember that this syndrome occurs in individuals with visual loss, who therefore see real stimuli more blurred).

These hallucinations occur without a clear cause that triggers them ; although stress, excessive or poor lighting or lack or overload of sensory stimulation facilitate their appearance. The duration of the hallucinations is usually short, varying from seconds to hours, and they usually disappear spontaneously when you close your eyes or redirect your gaze towards them or to another point.

The causes of this syndrome, as discussed above, are found in vision loss. This loss is usually due to damage to the visual system, and is usually caused by macular degeneration or glaucoma and appears mainly in older subjects. However, it is also possible that this loss of vision is due to the presence of a brain pathology that makes the connection between the eye and the occipital lobe difficult.

But even if an eye disease causes vision loss, one might wonder why hallucinations and Charles Bonnet Syndrome appear. In this sense, there is a wide variety of theories that work on the subject, one of the most accepted being the Theory of Neuronal De-Nazification .

This theory is based on the consideration that due to eye disease there is a loss of nerve impulses that should reach the occipital cortex, the area of the brain responsible for processing visual information. This causes the brain to become especially sensitive to the stimuli that reach it , being affected in addition by other sensory stimulations that, in the face of the hypersensitivity of the receptors, could form the perception of hallucinations, activating the visual area.

With respect to the treatment of Charles Bonnet Syndrome, on a psychological level, the first thing that must be done is to reassure and provide information to the patient, who may present great anguish by not knowing what is happening and believing that he has some type of dementia or mental disorder. It should be explained that the visions he experiences are a consequence of the loss of vision , and it is recommended that ophthalmologists inform of the possibility of the appearance of this phenomenon as a consequence of the loss of sight in patients with diseases that degenerate this sense, encouraging patients to tell of their experiences.

On a pharmacological level, this type of disorder generally does not respond positively to neuroleptics, although some cases of haloperidol and risperidone have shown some efficacy. Anticonvulsants such as carbamazapine have also been proposed.

However, the most helpful thing in this syndrome is to treat the medical cause of the vision loss by increasing visual acuity as much as possible. Some patients with this syndrome have been shown not to have hallucinations again after surgery or treatment for their vision problem.