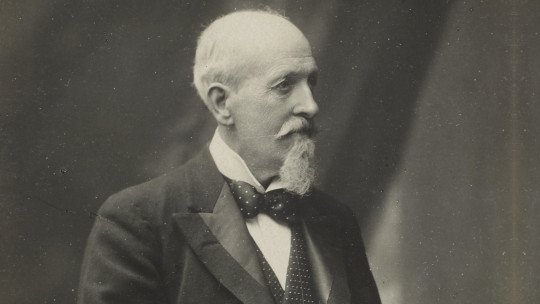 Modern psychology, and especially its experimental branch, would not be the same if it had not been for the great contributions of Charles Spearman .

This English psychologist is widely known in the research field for his statistical contributions in the study of psychological processes, in addition to being the author of one of the best known theories on human intelligence within the field.

Let’s take a closer look at the life of Charles Spearman , whose life, by turns of events, went from being aimed at defending his country to focusing on the intellectual abilities of human beings.

Spearman’s beginnings in the field of psychology could be considered late, because he began his studies in 1898, when he was 34 years old and after having been an officer in the second battalion of the Royal Munster Fusiliers in India (1885-1897) for 15 years.

His decision to begin studies in experimental psychology was possibly influenced by the fact that, while he was in the Indian subcontinent, he documented this discipline in his spare time.

At that time, British psychology was characterized as a branch of philosophy. This is why Charles Spearman preferred to go abroad, specifically to Leipzig, Germany, in order to study experimental psychology, which had a certain independence from the field of philosophy.

Spearman had the opportunity to receive knowledge from Wundt himself, however, he did not share his taste for focusing on basic psychological processes, both cognitive and perceptive, feeling the British predilection for more complex situations that occur in real life, such as school performance.

After spending two years studying psychology at Leipzig University, he was called up to serve Britain in the Second Boer War (1899-1902). He returned from the conflict, finally graduating in psychology in 1907.

Spearman’s popularity is mainly due to the publication of two articles in the American Journal of Psychology in 1904, when he was still studying psychology. To this day, these two articles continue to have an impact, each carrying more than 2,000 citations.

The first, ‘The proof and measurement of association between two things’, sought to expand on Galton’s idea of the correlation coefficient.

Spearman, despite considering as important the findings made by Galton, and other great researchers such as Pearson and Bravais, did not consider them as useful for the field of experimental psychology, believing that they should be reformulated and adapted to the demands of the discipline.

In the same article, Spearman introduces the concept of partial correlation , as a way of controlling for extraneous variables.

The other article, ‘general intelligence, objectively determined and measured’, Charles Spearman makes a criticism of previous experimental research, in addition to trying to demonstrate the strength of the correlation coefficient.

He read about previous studies that had failed to find correlations, and pointed out possible methodological flaws, along with lack of motivation of participants and errors in measuring and analyzing results.

After the publication of the two above-mentioned articles, Spearman was offered a position at University College London to take charge of the experimental psychology program at that university, in addition to working as a professor at the institution.

This was the seed for the emergence of what was called ‘the London school of individual differences’, in which the likes of Raymond Cattell, Hans Eysenck and Cyril Burt, among others, were members for some 30 years. Spearman and his students continued to address human intelligence and nature, publishing ‘The Abilities of Man’ in 1927.

The two main contributions to Spearman’s psychology are explained in more detail below, especially in the area of the study of intelligence and the use of statistics in psychological research.

Spearman presented his bifactorial theory of intelligence, according to which the execution of any mental activity depends on two different factors.

In the first place, there is the general factor or ‘g’, which is the common base of intelligence and that, although it occurs in a variable manner according to the individual, it remains stable in the individual for any situation.

Thus, according to the vision on intelligence proposed by Spearman, this construct is understood in such a way that there exists a general factor that is stable in the person and a series of specific factors , which are independent among them, which are manifested in the form of varied aptitudinal strengths and weaknesses.

This proposal of Spearman did not leave anyone indifferent, besides being one of the first investigations in which he applied the factorial analysis and contributed with the correlation coefficient that his surname carries.

Thurstone criticized Spearman’s observation in 1938, since he defended the idea of the existence of multiple intelligences or intellectual aptitudes, which existed in a variety of forms.

This author initially claimed that there were at least seven: numerical, reasoning, spatial, perceptual, memory, verbal fluency and verbal comprehension.

Later, Thurstone himself agreed with Spearman regarding the existence of a general factor among the measures of skills. Years later, in 1963, Cattell also supported Spearman’s ideas, but with changes in defining the factors behind intelligence.

Today there is still a debate about whether or not there are different qualities in terms of intelligence, although the majority position is that there are.

Spearman’s great contribution, the existence that at least one factor is present in all actions where the use of intelligence is required, is still considered one of the great discoveries within experimental psychology.

Factorial analysis is a statistical method that serves to find relationships between multiple measures considered to be correlated. Spearman contributed significantly to the refinement of this method. It was he who coined the term factorial analysis and used it to measure multiple cognitive aspects.

In fact, it was the results obtained through factor analysis that allowed Spearman to postulate the concepts of general factor and specific factor .

Spearman applied mathematical procedures while conducting his research in experimental psychology, trying to describe and explore psychological phenomena from a statistical perspective, something that has come to significantly influence the discipline of mind and behavior to this day.

Spearman’s correlation coefficient allows two variables to be correlated by ranges rather than measuring their performance separately.