In simplistic terms, the cingulate gyrus is like a “passing” structure, like a bridge, which differentiates us greatly from animals that have evolved differently from us.

It connects the structures that put us on an equal footing with other animals (the limbic system: let us remember the importance of the hippocampus and the amygdala) and those that give us the ability to plan, reason, and perform conceptual abstractions: the higher cognitive functions located in the neocortex. 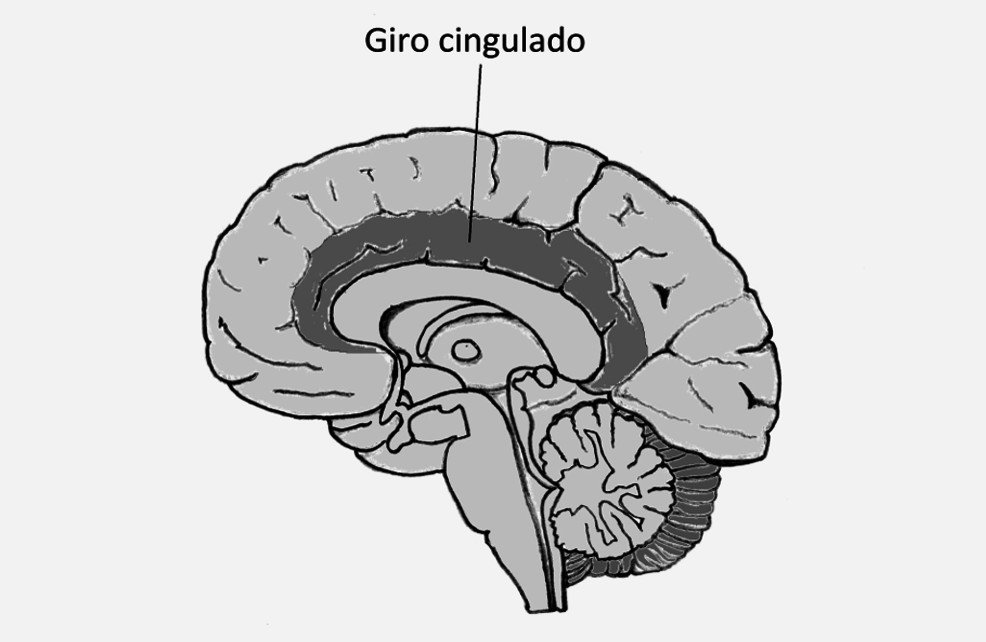 Functions of the cingulate gyrus

Papez (1929) stated that the communication between the hippocampus and the neocortex takes place in a reciprocal way .

At the same time, the hypothalamus sends information to the cingulate gyrus via the anterior thalamic nucleus-mamillary bodies and from there to the frontal cortex.

Posner and other authors (2007) have stated that the above cingulate turn is part of an executive attentional network, which is in charge of regulating the information processing of other sensorial and emotional networks. This is important in order to perform a task, especially those that involve effort or are new (non-routine).

Some authors, such as Posner and Botvinick, propose the conflict monitoring hypothesis, which argues that when a conflict detection occurs in a task (as in the Stroop test), the previous cingulate turn puts into action a set of strategic adjustments in cognitive control and in response planning.

Their aim is to reduce conflict in the task and, on the next occasion, to get it right. It is like a controlled mechanized evaluation of the results. If these are not satisfactory, information is sent to other structures in the planning system (frontoparietal and cerebellum system) which are responsible for establishing strategies for action and learning from the mistake.

According to Kandel (2000), the emotional state of humans is composed of physical sensations and concrete feelings, and they are regulated by different anatomical structures.

Concrete feelings are regulated by the cingulate cortex and the orbitofrontal cortex, and emotional states (peripheral, autonomic, endocrine and skeletal-motor responses) involve subcortical structures such as the amygdala, hypothalamus and brain stem. For example, when we watch a horror movie and feel fear, we simultaneously experience an increase in heart rate, dry mouth, tense muscles, and so on.

The anterior rostral cingulate cortex can help inhibit the activity of the amygdala, resolve emotional conflicts. This phenomenon is called “emotional top-down” .
In patients with depression there is an overactivation of the anterior cingulate cortex in the processing of self-referential negative words. More specifically, there is a positive correlation between the amygdala, the medial prefrontal cortex and the rostral cingulate cortex in the processing of negative self-referential emotional information.

In people with anxiety, there is no suppression of the activity of the amygdala, which correlates negatively with the activity of the rostral anterior cingulate cortex. The changes in this activity will depend on the perceived threat, the degree of defenselessness felt by the person and the anticipation of the adverse stimuli .

What happens if the cingulate gyrus is injured?

Their injury produces several disorders and syndromes, such as mutism, imitative behavior (ecopraxy), and compulsive use of objects.

The best known alteration when the cingulate gyrus is injured is the frontal medial or anterior cingulate syndrome, which is characterized by lack of initiative, akinesia or hypokinesia, apathy and mutism. There is a reduction in goal-oriented activities, patients show no interest or concern for anything (neither for their family, themselves nor the future).

It would also have to do with the environment dependency syndrome, which leads to the loss of personal autonomy (it involves a tendency to distraction, hyperreactivity, decreased motivation and apathy).