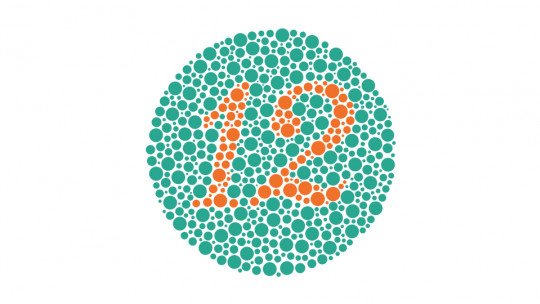 Of all the senses, sight is the most developed in the human being. Being able to see allows us to perceive the stimuli and events that are present around us, and this allows us to analyze and evaluate the situation immediately and be able to react to it, even instinctively.

However, we do not all see it the same way. Through our eyes we see many things: shapes, depth… even color. But there are people who are not able to detect any of these properties. This is the case of colour blindness , which we will explain what it is and what its causes are.

Human beings are able to see thanks to a complex association between light-sensitive cells and neurons that transmit and process this information: the visual system. This system is in charge of capturing images through the refraction of light , thanks to which we can capture the elements of the environment in an efficient and effective way. The images are captured by the main organ of vision, the eye, to be later processed at the brain level.

When an image is captured, light enters the eye through the cornea and crosses the eye to the retina, where the image is projected in reverse.

In the retina there is a series of receptors that allow us to capture different aspects of the image, the cones and the rods . While the rods focus on capturing the level of luminosity thanks to their extreme sensitivity to light energy, the cones are the main ones in charge of providing information regarding colour.

Located in the fovea, the cones allow us to capture the colour thanks to the existence of three pigments inside them , which can capture different wavelengths (specifically they contain erythropsin, chloropsin and cyanopsin, which allow us to see red, green and blue respectively).

From the retina, the information will be sent to the brain through the optic nerve, to be processed later. Thanks to this, we are able to recognize a great amount of different colors, possessing a trichromatic vision. But what happens in the case of a colour-blind person?

What does it mean to be colorblind?

A colour-blind person is considered to be one who shows severe difficulty or total lack of ability to perceive one or more colours. Also called colour blindness , colour blindness means that the eye is not able to perceive the wavelength corresponding to a certain colour, either because it does not possess the pigments to do so or because it has stopped working properly.

This means that, when faced with stimuli that people with three pigments in their cones see in a certain colour, the colour-blind subject will perceive a different colour and will even be unable to perceive the differences between that colour and the one he or she is confused with (for example, he or she will see green something that others see in the same colour, but also what another person who is not colour-blind would see red).

This is a condition that until now has been chronic , although research into gene therapy may offer some kind of solution to this problem in the future. As a rule, colour blindness is not a problem of adaptation and does not usually have a great impact.

This condition, however, disqualifies the person from certain professions and activities. For example, although they may have a driving licence, professions such as pilots are forbidden because of the risk of not being able to distinguish certain colours or signs. Why does this disorder occur?

The causes of this deficiency in color perception are found in the absence of certain pigments in the cones of the retina. In most cases, this absence is of genetic origin and is caused specifically by X-linked alterations .

In addition to its genetic origin, there are some substances that can also induce it as a side effect , and there are some cases of medicines that produce it, such as hydroxychloroquine.

Finally, some strokes or diseases such as macular degeneration, dementias or diabetes can cause damage that impedes color perception, either by affecting the retina, the optic nerve or the brain regions where color information is processed.

As we have seen, color blindness is defined as the absence or difficulty of perceiving the color of objects. However, people with this problem may have different degrees of difficulty in their detection, as well as may differ in the shades they will be able to perceive . Below are the most common types of colour blindness.

The most common type of color blindness is produced by the absence of one of the three pigments . If it is impossible for the pigment in question to capture the colour, it will be captured through a different wavelength, and another colour will be perceived.

Sometimes this causes two colors to be confused, as in the example of the confusion between red and green . It should be noted that it is not a question of not seeing a single colour, but also of not perceiving correctly all those colours that result from the combination of this colour with others.

Also, dichromatism may only occur in one eye, with trichromatic color vision in the other eye. Depending on the type of receptor that is not working properly, three subtypes of dichromatism can be distinguished :

The missing pigment is the one corresponding to the green . Short wavelengths will be perceived as blue, while from a neutral point where you perceive the colour grey you will start to perceive different shades of yellow.

The blue pigment is the one that works incorrectly in this type of color blindness. It is the least common subtype and usually causes greater perceptual loss than the previous types. These people perceive the colour green at short wavelengths, so that from a neutral point they begin to see red.

In this case, the individual possesses all three types of pigments, but at least one works abnormally and cannot perceive color in the same way as a trichromatic.

In this case they need the colour intensity to be much higher than usual in order to capture it. It is also frequent that they confuse colours. As with dichromatisms, we can find three types:

People with this strange condition do not have functional cones, being unable to perceive color. They can only experience reality in different shades of white, black and grey , basing their entire vision on the light detection capacity of the rods.

One of the most commonly used tools to diagnose color blindness is Ishihara$0027s color test . This tool consists of a series of images created with several dots very close together that, from the different patterns of their coloring, form an image. People with some kind of color blindness have difficulty seeing the image that is formed, since beyond the color of the dots there is nothing that gives clues about the shape of that figure.

However, it must be remembered that the diagnosis can only be made by specialists who examine each individual case.