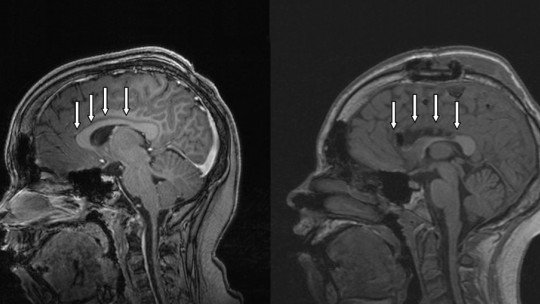 The corpus callosum is a structure composed of nerve fibers that acts as a bridge connecting both brain hemispheres.

When damaged by an injury or disease, the corpus callosum disconnection syndrome can occur, a serious neurological disorder that causes numerous sensory and motor disorders.

In this article we explain what corpus callosum disconnection syndrome is, where the term comes from, what the causes are and the main signs and symptoms that this disorder causes.

Callus Disconnection Syndrome: what is it?

The effects of interhemispheric disconnection were initially investigated by the German neurologist, Carl Wernicke, who predicted the existence of the aphasic disconnection syndrome, which occurred as a result of sectioning the connections between the posterior and anterior areas of the cortical structures responsible for language.

At the beginning of the last century, the German psychiatrist Hugo Liepmann also extensively studied the principle of disconnection with respect to the idea that some apraxias (neurological disorders characterized by the inability to carry out purposeful, learned or familiar movements) could be caused by this phenomenon.

From the 1950s onwards, Roger W. Sperry and his colleagues investigated the effect of disconnecting the corpus callosum in animals, specifically cats, showing that these could appear indistinguishable from healthy animals in terms of their behaviour , in most tests and in training conditions.

However, Sperry’s studies revealed that the animals, under certain training procedures, had important deficiencies; so, if sensory information were allowed to have a separate access to each brain hemisphere, it would be demonstrated that each one of them has separate perception, learning and memory processes.

After studies in animals, Norman Geschwind, Mishkin and other behavioral scientists began to investigate the effect of disconnection (intra and interhemispheric) in humans, constructing models of disconnection syndromes that demonstrated the existence of a functional and structural interdependence between different neocortical regions .

Physiology and functions of the corpus callosum

The cerebral cortex is interconnected by three types of nerve fibers: the projection fibers, which include ascending and descending fibers that go to and from the neocortex to other regions such as the trunk and the spinal cord; the association fibers, which include short and long fibers that connect different areas of the neocortex that are far from each other; and the commissural fibers, which connect the cerebral hemispheres, such as those of the corpus callosum, among others.

The neurons of the corpus callosum exert their action, both inhibitory and excitatory, through interneurons . Through the corpus callosum, the information generated in one hemisphere flows to the other and the different responses that occur when they are activated simultaneously are coordinated. Each brain hemisphere is capable of locally and selectively modulating the functioning of its counterpart regions on the opposite side.

In this sense, several studies have shown that each hemisphere can learn to visually discriminate from the information that reaches the contralateral hemisphere . However, this learning disappears after the lesion or commissure occurs.

The corpus callosum disconnection syndrome can be due to multiple causes including lesions in this brain structure , infarctions (in the posterior or anterior cerebral artery or affecting the transcallosal fibers), cranioencephalic trauma (edemas, contusions, hematomas or axonal damage), tumors, malformations and neurological disorders such as Marchiafava Bignami disease.

With regard to the clinical signs and symptoms that a disconnection syndrome can cause, these can be divided into two groups: the acute ones, which are observed within the first days or weeks after disconnection; and the chronic ones, which arise after 6 months of the lesion and can be detected through methods such as dictatic listening and tachistoscopy. These are the most common:

The most common signs and symptoms of corpus callosum disconnection syndrome include the following:

These are the most common chronic signs and symptoms that appear after 6 months following disconnection of the corpus callosum:

Research by Roger Sperry and Michael Gazzaniga with patients who present an interhemispheric disconnection due to lesions in their corpus callosum, has shown that these people seem to experience a division of consciousness : the left and right sides of their brain seem to be “conscious” and able to respond independently to stimuli.

However, a recent study by Pinto et al. has revealed evidence that patients with split brains are able to report the presence of stimuli in the left or right visual field using either hand, and can also do so verbally. These new findings suggest that cortical disconnection between hemispheres does not appear to lead to two “independent conscious agents” within the brain.

However, the patients presented certain deficits, such as the inability to manifest whether two stimuli presented on opposite sides of the visual field were the same or different, which suggests that, although the interhemispheric disconnection did not seem to affect their consciousness, the transfer of information between cerebral hemispheres was indeed altered .