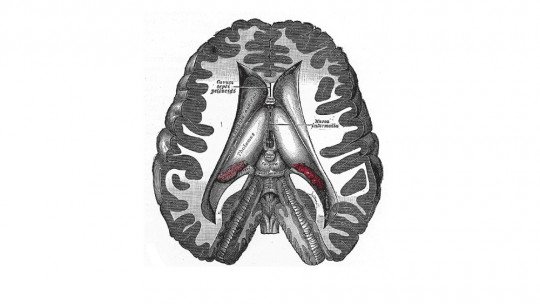 When it begins to develop, the central nervous system is made up of three sections: the prosencephalon, midbrain, and rhomboid. These initial structures will later give rise to the various parts of the adult brain, including the diencephalon.

In this article we will describe the structure and functions of the diencephalon , which includes such important regions as the thalamus and hypothalamus and allows the correct functioning of multiple biological processes, such as the secretion of hormones and the regulation of the autonomous system.

What is the diencephalon?

The diencephalon is a part of the brain that is situated in its medial region . This name refers to the part of the neural tube that gives rise to various brain structures as embryonic development progresses.

The cavity formed by these structures is the third ventricle , which cushions the effects of trauma that could damage them. The posterior cerebral artery and the Willis polygon allow the blood supply of the diencephalon.

Parts of the brain and cerebrum

The brain is the part of the central nervous system that is located in the cranial cavity, as opposed to the spinal cord. This organ is composed of the brain, the cerebellum and the brain stem .

As the fetus grows the prosencephalon divides into the diencephalon and the telencephalon ; from this the cerebral hemispheres, the basal ganglia and the limbic system, including the amygdala, will develop. We describe the sections of the diencephalon in the following section.

Structure and functions of the diencephalon

The brain region we know as the diencephalon is composed of several structures. These are connected to each other and to the rest of the nervous system, both at the cortical and subcortical levels.

Also very relevant is its relationship with the endocrine system, made up of glands that secrete hormones into the blood.

The thalamus functions as a kind of relay nucleus for the connections between the cerebral cortex and the subcortical structures . It is fundamental for the reception of sensory afferences (with the exception of the olfactory ones, which go directly to the cortex) and their transmission to the cerebral lobes.

This structure also plays a role in the regulation of consciousness and the sleep-wake cycle, and influences motor skills through the efferences that are projected from the thalamus to the basal ganglia and the cerebellum.

The hypothalamus is located below the thalamus. The main functions of this structure include connecting the nervous and endocrine systems and controlling the secretion of hormones by the pituitary and other glands.

The hypothalamus directly produces vasopressin and oxytocin, but it also stimulates the endocrine glands to secrete other hormones. In addition, it is key to the regulation of the body’s homeostasis as it intervenes in thirst, hunger, temperature, circadian rhythms, stress and other body processes.

The pituitary is an endocrine gland attached to the hypothalamus . It is very important for growth, regulation of the kidneys, sexual function and reproduction, among other aspects.

It consists of two lobes: the anterior pituitary (adenohypophysis) and the posterior pituitary (neurohypophysis). While the neuropituitary secretes oxytocin and vasopressin, synthesized by the hypothalamus, the adenopituitary produces and releases corticotropin, growth hormone, prolactin, luteinizing hormone and follicle-stimulating hormone, among others.

This brain structure is mainly composed of the pineal gland , fundamental in the circadian and seasonal cycles, and the habenula, involved in the function of the neurotransmitters dopamine, noradrenaline and serotonin. The epithalamus connects the limbic system with other regions of the brain.

The subthalamus is attached to the globus pallidus, one of the main nuclei of the basal ganglia. Because of this it plays a regulatory role in extrapyramidal and involuntary movements.

The retina develops from the diencephalon, which is why is considered part of the central nervous system . The optic nerve allows the transmission of information from the eye to the brain by binding to the diencephalon.

The ventricles of the brain allow the circulation of cerebrospinal fluid , which serves blood-like functions in the brain and spinal cord, as well as protecting neural tissue from shock and injury. The third ventricle is located in the middle part of the ventricular system, below the epithalamus.